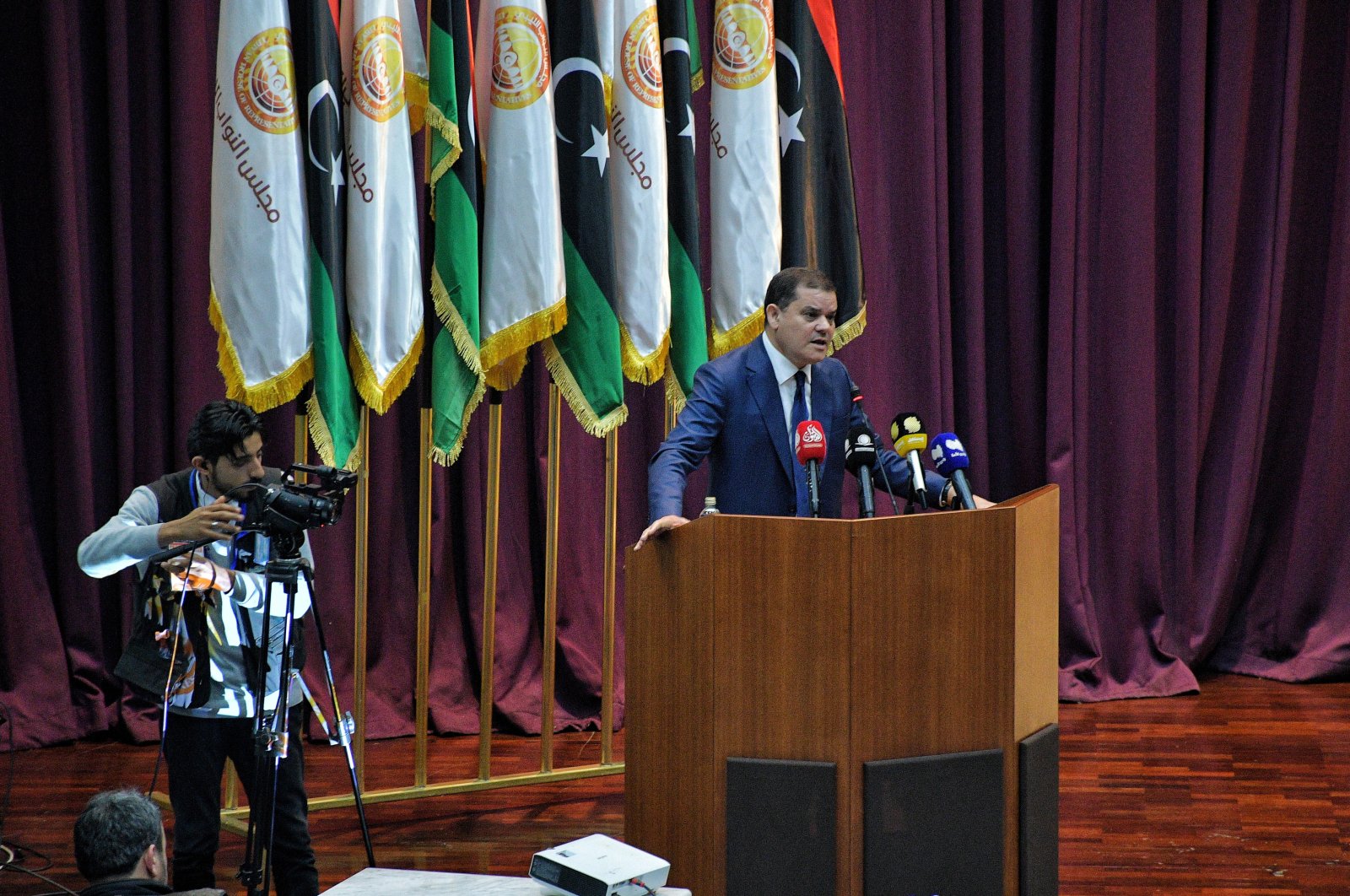 Newly appointed Libyan Prime Minister-designate Abdul Hamid Dbeibah addresses the Libyan parliament a day before his Cabinet secured a vote of confidence from the body, in Sirte, Libya, March 9, 2021. (AP Photo)
by DAILY SABAH WITH AA Mar 11, 2021 11:55 am
RECOMMENDED

Arab states and the U.S. welcomed the recent developments in war-torn Libya, particularly the vote of confidence that the newly elected prime minister of the country Abdul Hamid Dbeibeh received Wednesday.

In a statement, Qatar's Foreign Ministry welcomed the confidence given to the national unity government headed by Dbeibeh, promising to support the new government "in order to achieve the aspirations of the brotherly Libyan people for development, stability and prosperity."

The oil-rich Gulf country expressed hope that Dbeibeh's government will pave the way for "a comprehensive political solution that preserves the territorial integrity of Libya and establishes the rule of law and civil institutions."

Jordan's Foreign Affairs Minister Ayman Safadi also congratulated Libyans on their newly approved government on his Twitter account, calling it "a major step" toward resolving the Libyan crisis and restoring the country's security and stability.

Safadi expressed Jordan's commitment to supporting Libya in reaching a political solution to its crisis.

The Egyptian Ministry of Foreign Affairs issued a statement to affirm Egypt's readiness "to work with the national unity government during the transitional period" while supporting it toward fulfilling its mandate of holding general elections in December this year.

Tunisian President Kais Saied congratulated Dbeibeh in a phone call between the two leaders, hailing Libyans for agreeing "on a common word" following the Libyan parliament's granting of confidence in the new government. He expressed his country's determination to cooperate with the new Libyan government in all fields, citing familial and historic relations between the two countries.

Saied also expressed his sincere determination to open "wide horizons in all fields" with the Libyan government based on the special family ties that unite Libyans and Tunisians that struck deep into history."

In Algeria, President Abdelmadjid Tebboune affirmed his "full support and readiness to support the new government," expressing his hope "to end the state of division in Libya to ensure the success of the important benefits at the end of this year," referring to the general elections.

In a statement published by the presidency, Tebboune said that Algeria, "which has demonstrated in word and deed its support for the Libyan people and its unconditional solidarity with them, will spare no effort for the sake of achieving peace and national reconciliation in this brotherly country."

In Lebanon, the prime minister-designate, Saad Hariri, contacted Dbeibeh and congratulated him on his government's approval.

Hariri said in a tweet that he wished Dbeibeh "success in his efforts to reunite (the Libyan) institutions, launch the wheel of reconstruction and hold parliamentary elections at the end of this year."

The Saudi Ministry of Foreign Affairs also expressed its "hope that this achievement would preserve the unity and sovereignty of Libya, leading to the departure of all foreign fighters and mercenaries."

In a statement, the ministry expressed Riyadh's hope that "this achievement will establish a permanent solution that prevents foreign interference that endangers Arab regional security."

In Kuwait, the Ministry of Foreign Affairs welcomed the formation of the new Libyan executive authority, praising the efforts made by the U.N. to achieve this goal.

The ministry expressed "hope that this achievement will achieve the aspirations of the Libyan people for security and stability and that the U.N. will be able to achieve success in the remaining tracks."

For its part, the Bahraini Ministry of Foreign Affairs emphasized "the importance of the step in establishing security and stability in Libya and achieving the aspirations of its brotherly people for peace, development and prosperity."

It also called on "all Libyan society to follow the peace approach and to give priority to the national good."

In Abu Dhabi, the Emirati Ministry of Foreign Affairs praised the "efforts of the UN to form a new executive authority," stressing "Abu Dhabi's cooperation with the new authority in order to achieve security, stability, prosperity and the aspirations of the Libyan people."

The ministry said, "The UAE is looking forward to the success of the remaining paths (to solve the crisis in Libya) under the auspices of the United Nations mission."

The Arab League meanwhile issued a statement hailing "the broad consensus that characterized the discussions that took place between members of the Libyan House of Representatives and the overwhelming confidence given to the new government headed by Dbeibeh."

U.S. Secretary of State Antony Blinken also expressed the importance of the vote for the future of the country. Calling the incident a "turning point" in Libya, Blinken stated that the U.S. urges the new government to hold free and fair elections on Dec. 24.

Blinken also appreciated Fayaz Sarraj, the head of the Government of National Accord (GNA), for his efforts for the country's peace so far.

Earlier Wednesday, in a majority vote, Libya's parliament granted confidence to Dbeibeh's new unity government with 132 votes of the 133 lawmakers who attended the voting session.

Dbeibeh proposed a unity government of 27 members on Saturday, promising that the government will prioritize "improving services, unifying state institutions and ending the transitional period by holding elections."

Dbeibeh, for his part, described the parliament's vote of confidence in his interim government as a "historical moment" and pledged to end the war in his country.

On Feb. 5, Libya's rival political groups agreed in U.N.-mediated talks to form an interim unity government to lead the country to elections this December, where Dbeibeh was designated as the prime minister and tasked with forming a new government.

The war was exacerbated when putschist Gen. Khalifa Haftar, supported by several countries including the United Arab Emirates (UAE), Egypt, Russia and France, carried out a military onslaught to topple the Tripoli-based internationally recognized GNA for control of the North African country.

Meanwhile, Sarraj said Wednesday that he is ready to step down and pass his tasks and responsibilities to the new government to consolidate the principle of peaceful transition of power.

"I congratulate the government of national unity for the vote of confidence and I wish the new Cabinet success in accomplishing its tasks," Sarraj said.

"What happened today is an important step to end the conflict and division," he noted, calling on all parties to intensify "cooperation, unity and tolerance for the sake of the renaissance of Libya."

The government loyal to Haftar, on the other hand, expressed on Facebook its "full readiness to hand over tasks, ministries, directorates and institutions to the national unity government."