Citizens called to arms as Ethiopia declares state of emergency 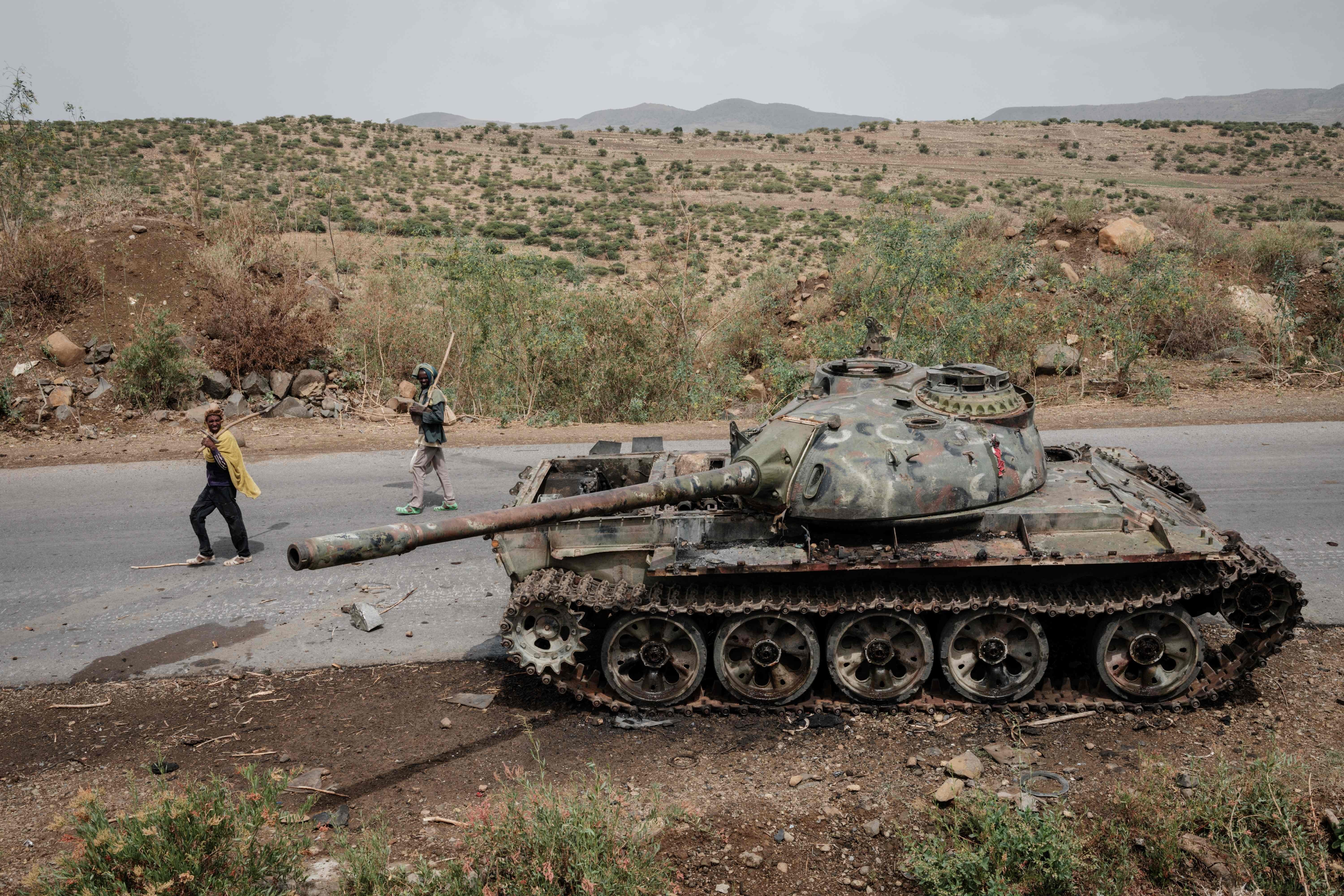 Local farmers walk next to a damaged tank that is abandoned along the road in this file photo taken in Dansa, southwest of Mekele in Tigray region, Ethiopia, June 20, 2021. (Photo by Yasuyoshi CHIBA / AFP)
by DAILY SABAH WITH AGENCIES Nov 02, 2021 6:49 pm
RECOMMENDED

A nationwide state of emergency has been declared by Ethiopia's cabinet while the residents of Addis Ababa have been called to arms in defense of their capital.

"The state of emergency is aimed to protect civilians from atrocities being committed by the terrorist TPLF group in several parts of the country," the state-affiliated Fana Broadcasting Corporate reported, referring to the Tigray People's Liberation Front (TPLF) which recently seized two crucial towns 400 kilometers (250 miles) from the capital.

Lawmakers are expected to approve the measure within 24 hours, Fana said.

Earlier Tuesday, officials ordered Addis Ababa residents to register their firearms and prepare to defend their neighborhoods. Firearms need to be registered with police within the next two days, a senior city official, Kenea Yadeta, said on Tuesday, adding that all parts of Ethiopian society were called upon to cooperate in defense of the nation.

Since the beginning of August, the explosive conflict has spread to Addis Ababa's neighboring regions of Afar and Amhara. In the past few days, the military was forced to withdraw from important cities in the Amhara region near the capital which has so far not seen any fighting.

The government has denied claims of TPLF territorial gains which, if confirmed, would represent a major strategic advance.

The clashes have led to a serious humanitarian crisis in the country's northern Tigray region.

The TPLF dominated Ethiopia, with its around 115 million inhabitants, for about 25 years until Prime Minister Abiy Ahmed came to power in 2018 and ousted it.

Leading members of the military then defected to the TPLF, allowing the rebels to achieve great successes within a short amount of time.

Abiy sent troops into the Tigray region a year ago to detain and disarm the TPLF, a move he said came in response to attacks on army camps. The 2019 Nobel Peace laureate promised a swift victory, but by late June the rebels had regrouped and retaken most of Tigray.

Together with rebels from the Oromo Liberation Army (OLA), the TPLF was able to gain access to one of the most important highways in the country and is now advancing on Addis Ababa.

Much of northern Ethiopia is under a communications blackout, and access for journalists is restricted, making battlefield claims difficult to verify independently.

The international community has expressed alarm at the expanding conflict, with Western powers reiterating calls for an immediate ceasefire and for the African Union to broker peace talks between the warring parties.