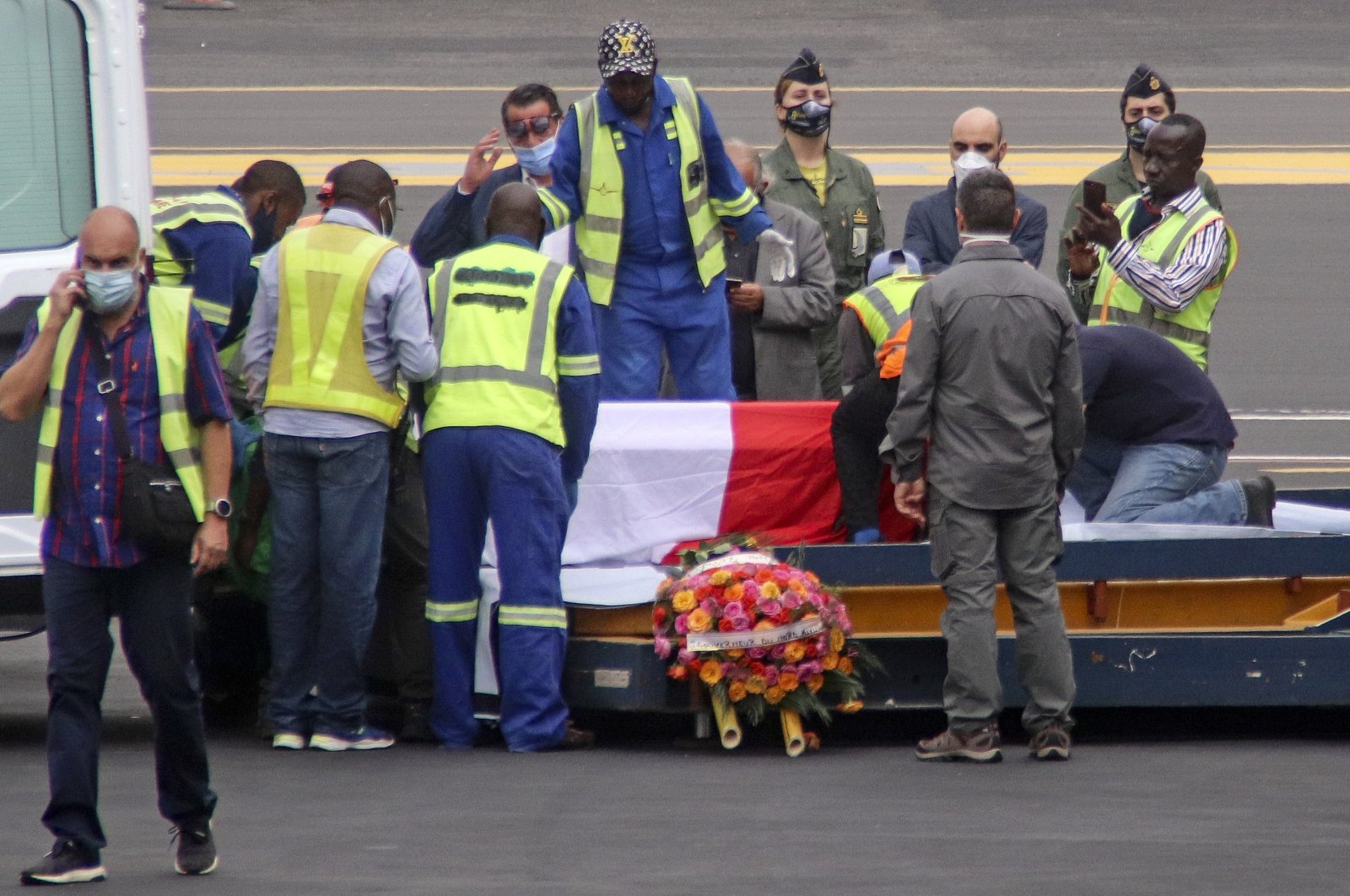 The coffins of Italian ambassador to Congo Luca Attanasio and Carabinieri officer Vittorio Iacovacci, draped with the Italian flag, are prepared to be loaded onto an airplane for repatriation to Italy, at the airport in Goma, North Kivu province, Congo, Feb. 23, 2021. (AP Photo)
by ASSOCIATED PRESS Feb 23, 2021 8:02 pm
RECOMMENDED

An Italian Carabinieri unit is expected in Congo Tuesday to investigate the killings of the Italian ambassador to Congo, a Carabinieri officer and their driver in the country's troubled east.

Congolese authorities and members of the United Nations Mission in Congo are also expected in Goma, in eastern Congo to look into the killings.

Luca Attanasio, the ambassador to Congo since 2017, Carabinieri officer Vittorio Iacovacci and their driver Moustapha Milambo were killed Monday in an ambush as their World Food Program convoy was traveling from Goma, Congo’s eastern regional capital, to visit a WFP school project in Rutshuru, the U.N. agency said.

Congo’s interior ministry said four others in the convoy were kidnapped, but one of those abducted has since been found by Congo’s army.

The bodies of the ambassador and the officer are on their way back to Italy on a plane chartered by the Italian government, according to North Kivu governor Carly Nzanzu Kasivita.

"Investigations are underway to find the perpetrators of this despicable crime,” said the governor.

Congo’s government has blamed the killings on the Democratic Forces for the Liberation of Rwanda, the Rwandan Hutu rebel group known as FDLR.

The rebel group, however, on Tuesday, denied responsibility for the attack.

"The FDLR declares that there is nothing to implicate it in the attack that resulted in the death of the Italian ambassador and asks that Congolese authorities and MONUSCO to do all they can to shed light on those responsible for this ignoble assassination,” rebel spokesperson Cure Ngoma said in a statement.

The rebel group noted the attack took place in the "three antennas” area near Goma and the border of Rwanda and close to Congolese and Rwandan military positions. It blamed the killings on those forces.

Eastern Congo is home to myriad rebel groups all vying for control of parts of the mineral-rich, loosely governed Central African nation that is the size of Western Europe.

More than 120 armed groups are active in eastern Congo which has been insecure for more than 25 years, according to Kivu Security Tracker, a joint project between Human Rights Watch and the Congo Research Institute to monitor armed violence in Eastern Congo.

In the specific area of the attack, several armed groups are active including the FDLR, the Nyatura militia and remnants of the former M23 rebels.

It’s unusual for a top diplomat to be targeted in eastern Congo, but attacks have been rising, said Pierre Boisselet, coordinator of the Kivu Security Tracker.

"Attacks on humanitarians and kidnappings of humanitarian workers have been increasing. Last year we recorded 12 of those incidents in North and South Kivu but only one ended in a death,” he said.

The attack, about 25 kilometers (15 miles) north of Goma, was right next to Virunga National Park.

The U.N. vehicles were hijacked by the attackers and taken into the bush. The Congolese army and park guards for Virunga National Park responded to the attack and there was an exchange of fire, according to North Kivu Gov. Carly Nzanzu Kasivita.

Attanasio was shot in the abdomen and was then transported to the U.N. Mission in Congo hospital where he died from his wounds, according to Congo’s interior ministry. The driver and police officer died at the scene.

The WFP said the attack occurred on a road that had been cleared previously for travel without security escorts, and it was seeking more information from local officials on the attack.

Congo’s interior ministry said the provincial authorities of North Kivu were not aware of the presence of the Italian ambassador and therefore did not provide him with security measures. U.N. peacekeeping chief Jean-Pierre Lacroix said that the determination of whether roads are safe is normally made by U.N. security officials in the country.

He said he had no details on "the exact unfolding of the incident" and that "the investigation will bring, hopefully, clarity to that."

Italy’s Foreign Ministry said Tuesday it will spare no effort to find out exactly what happened in the tragic attack.

In Rome, Foreign Minister Luigi Di Maio said he would soon brief parliament on the attack and cautioned against premature reconstructions of what transpired. Rome prosecutors have opened an investigation, which is done whenever an Italian citizen is killed overseas.

Lawmakers observed a moment of silence in the lower Chamber of Deputies, and flags flew at half-staff on government buildings as tributes poured in for the two men. In a front-page obituary in leading Corriere della Sera, the foreign ministry secretary-general, Elisabetta Belloni, said Attanasio firmly believed that through multilateral diplomacy, he could help make the world a better place.

The attack occurred in the same area where two Britons were kidnapped by unidentified gunmen in 2018, though they were released days later.

Eastern Congo remains one of the most insecure parts of the expansive country. More than 2,000 civilians were killed last year in eastern Congo provinces by armed rebel groups, according to U.N. reports last week.

The U.N. peacekeeping mission has been working toward reducing its more than 17,000-troop presence in the country and handing over its security work to Congolese authorities.