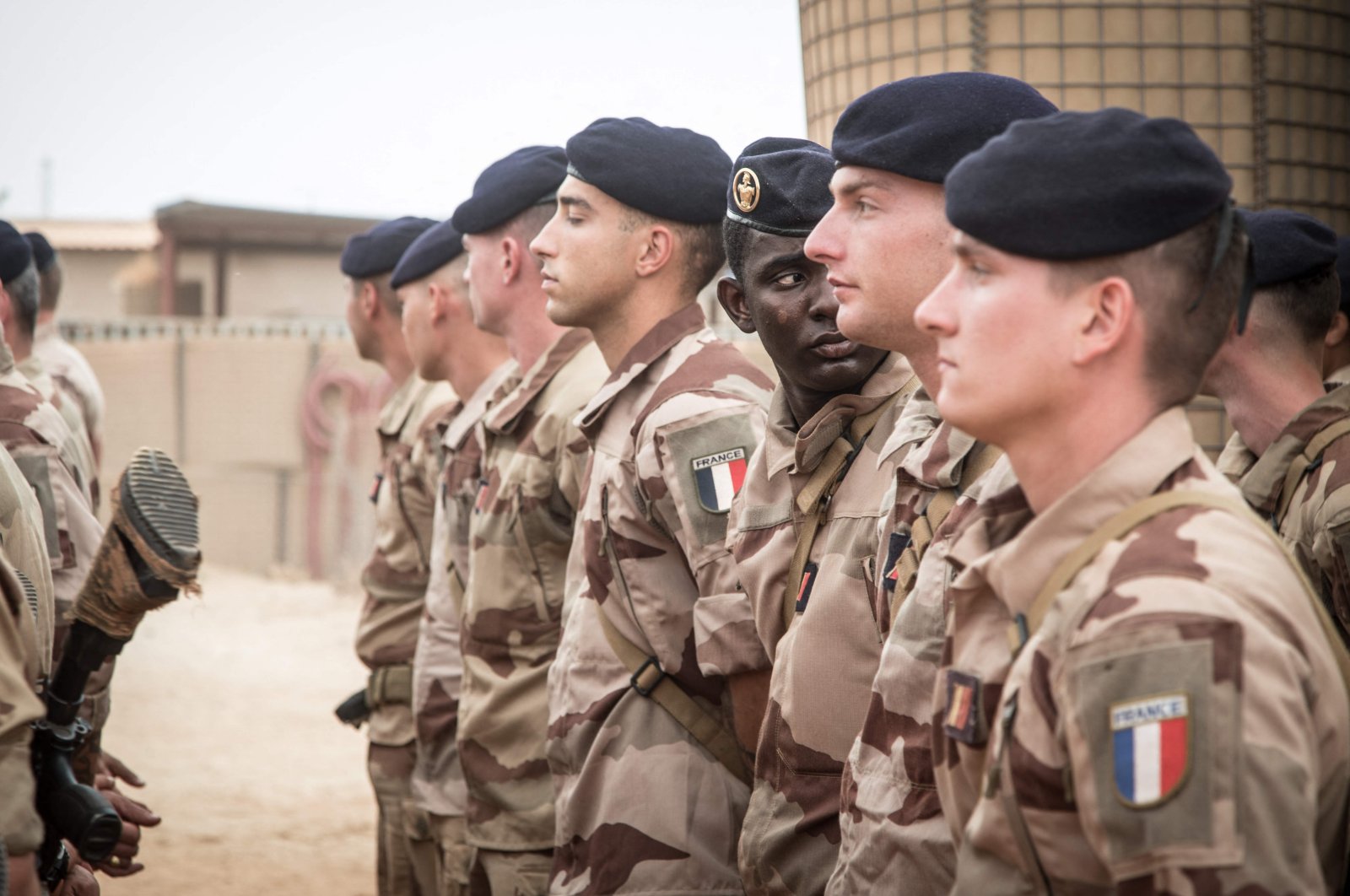 French soldiers from Operation Barkhane stand at attention as they wait for the handover ceremony of the Barkhane military base to the Malian army in Timbuktu, on Dec. 14, 2021. (AFP)
by French Press Agency - AFP Dec 23, 2021 9:06 pm
RECOMMENDED

The death of three people protesting a French military convoy in Niger last month has sparked anger in the African country faced with continuing militant violence amid a gradual French troop withdrawal.

Dozens of vehicles left Ivory Coast on their way to resupply a base in Mali used for France's anti-militant operations in the region.

But the convoy drew protests as it traveled first through Burkina Faso and then through western Niger.

In the town of Tera, shots were fired on Nov. 27 to disperse crowds, and three people died.

But the response from Paris has left many Nigeriens fuming.

Defense Minister Florence Parly said an internal inquiry had already been carried out and "showed that in the face of great violence, our soldiers demonstrated the necessary control and responded adequately."

Nigerien newspaper L'Eclosion said her response revealed "how little regard the French authorities have for the three people who were presumably killed by their army's bullets."

Souley Oumarou of a campaign group called the Forum for Responsible Citizenship said Parly's response had "thrown petrol on the flames."

"There is an effort to conceal the truth and a pathetic narrative that seeks to clear France of responsibility," he said, calling for an independent inquiry.

"Firearms should not be used against demonstrators who only have their bare hands or use stones as weapons."

France's military maintains that it did nothing wrong.

After forcing the convoy to stop through a string of roadblocks, the crowd tried to set fire to trucks containing ammunition and launched stones from slingshots, and two drivers suffered head injuries, according to its version of events.

A French army video seen by Agence France-Presse (AFP) shows the convoy surrounded by a very hostile crowd, some of whom are armed with sticks.

Captain François-Xavier, a soldier with the 2nd Foreign Parachute Regiment who led the convoy, was interviewed by AFP on condition that only his first name be used.

He painted a picture of soldiers who acted responsibly while facing an imminent threat.

The soldiers used non-lethal ammunition until this almost ran out, and then fired warning shots in the air and into the ground as a last resort, he said.

He said he had no information about how the casualties occurred.

"Did people get trampled on by others in the crowd, did bullets ricochet? I have no idea. No one took aim at the crowd – at no time was the order given to take aim," he insisted.

'Less security than ever'

French forces first intervened in the Sahel's militant emergency in 2013 and formalized the effort a year later with Operation Barkhane, eventually deploying some 5,100 troops, warplanes and drones.

But after a coup in Mali, France announced this year it intended to reduce troop numbers – sparking allegations from Mali leaders that the country was being abandoned.

The Niger episode has only added to France's woes.

"France arrived in 2013 with promises and ambitions to restore security and win the war against terrorism," said Rinaldo Depagne, an analyst at the International Crisis Group (ICG).

"But today, there is even less security than ever."

He said disappointment was fueling bitterness – an idea also voiced by an NGO in Tillaberi, the militant-hit Nigerien region that includes the town of Tera.

"Growing insecurity and the disarray it has caused has given rise to a legitimate feeling that the state has abandoned us, as well as a strong sentiment against foreign forces," the Citizen's Committee of Tillaberi said.

As for the political fallout from the convoy, it is in the interests of both France and Niger to keep their relations on track, given the volatile situation in Mali and the mounting toll inflicted by the militant, said Depagne.

France first intervened in the Sahel to beat back an insurgency in northern Mali. But the rebels regrouped and two years later spilled over into Burkina Faso and Niger.

Village massacres, roadside bombs and ambushes have claimed thousands of lives and more than a million people have fled their homes.