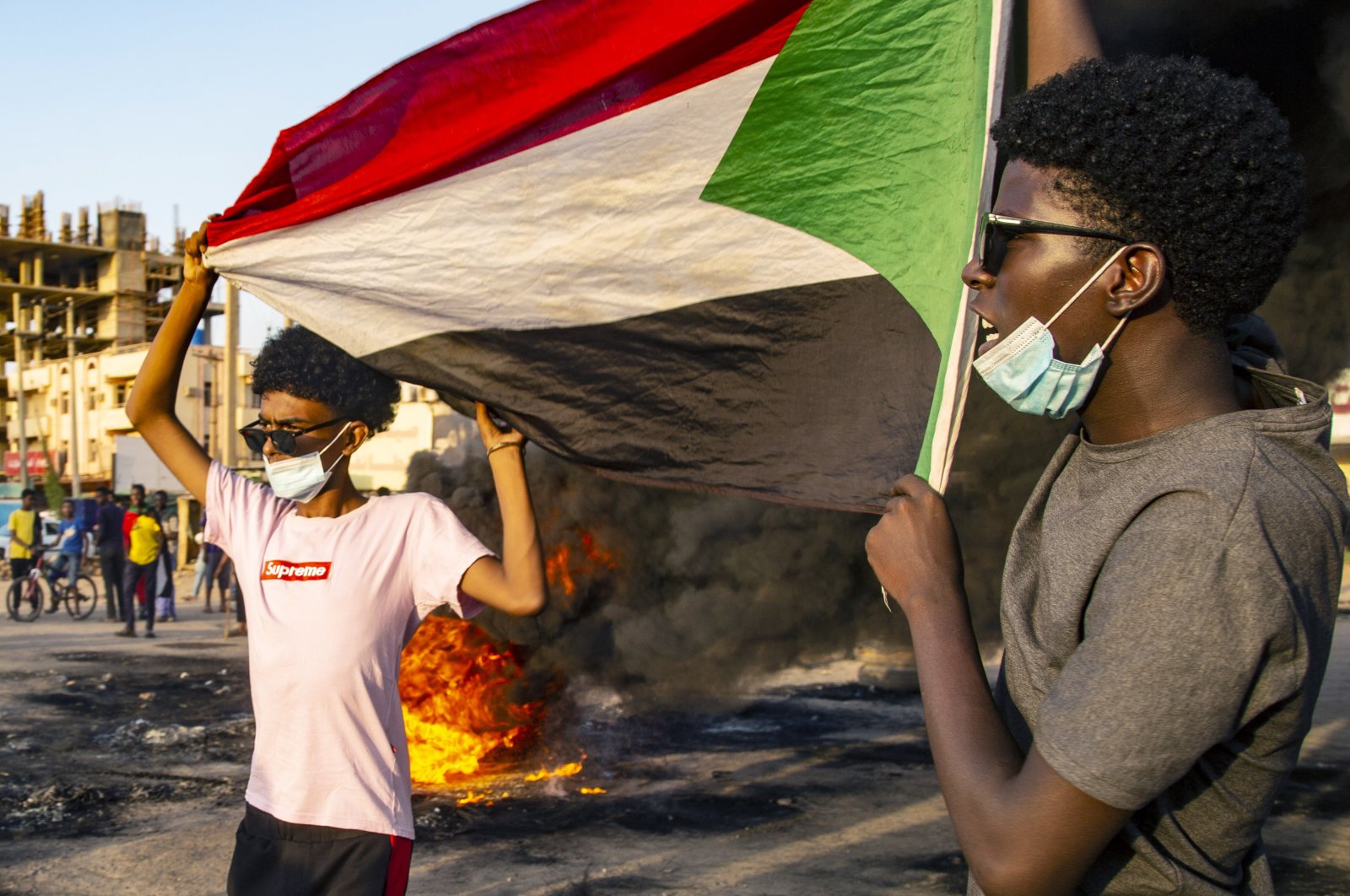 Pro-democracy protesters take to the streets to condemn a takeover by military officials in Khartoum, Sudan, Oct. 25, 2021. (AA Photo)
by Agencies Oct 29, 2021 11:14 am
RECOMMENDED

The United States and United Nations dialed up the pressure on Sudan's new military junta on Thursday as confrontations between soldiers and anti-coup protesters took the death toll to at least 11.

After the 15-member U.N. Security Council called for the restoration of Sudan's civilian-led government – toppled on Monday – U.S. President Joe Biden said his nation like others stood with the demonstrators.

"Together, our message to Sudan's military authorities is overwhelming and clear: the Sudanese people must be allowed to protest peacefully and the civilian-led transitional government must be restored," he said in a statement. "The events of recent days are a grave setback, but the United States will continue to stand with the people of Sudan and their nonviolent struggle," said Biden, whose government has frozen aid.

With thousands taking to the streets to oppose the takeover led by Gen. Abdel-Fattah al-Burhan, witnesses said live and rubber bullets were used on protesters in Bahri, across the river from the capital Khartoum as nightly protests picked up.

A doctors committee, which tracks the violence, said a "martyr" died in those clashes while two others were wounded and in critical condition. Earlier, a 22-year-old man died of gunshot wounds, a medical source said. That took the total of fatalities in four days to at least 11, medical sources said.

On Thursday night, al-Burhan said in a speech to groups who helped remove dictator Omar al-Bashir in 2019 that consultations were underway to select a prime minister, according to a video aired by Al-Jazeera TV. He said that the army is negotiating with Prime Minister Abdalla Hamdok of the now-dissolved transitional council to form the new government.

"Until this night, we were sending him people and telling him ... complete the path with us, until this meeting with you, we were sending him people to negotiate with him and we are still having hope," al-Burhan said. "We told him that we cleaned the stage for you ... he is free to form the government, we will not intervene in the government formation, anyone he will bring, we will not intervene at all."

In an interview with Russia’s state-owned Sputnik news agency published Friday, al-Burhan said the military he heads will appoint a technocrat prime minister to rule alongside it within a week.

"We have a patriotic duty to lead the people and help them in the transition period until elections are held," al-Burhan said in the interview.

The coup's leader, a top general, fired at least six ambassadors, including the envoys to the U.S., the European Union and France, after they condemned the military’s takeover of the country, a military official said Thursday.

Their dismissal came hours before the U.N. Security Council issued its first statement on recent events in Sudan, calling for the civilian transitional government to be restored to power and for those detained during the coup to be released. The diplomats had pledged their support for the now-deposed government of Hamdok. Also fired by al-Burhan late Wednesday were the Sudanese ambassadors to Qatar, China and the U.N. mission in Geneva, according to the official, who spoke on condition of anonymity because he was not authorized to brief media.

The U.N. Security Council, along with other foreign powers, called for restraint, dialogue and freedom of detainees. The latest of several recent coups in Africa ended a shaky transitional set-up in Sudan intended to lead to elections in 2023.

Power was shared between civilians and the military following the fall of al-Bashir, whom the army deposed after a popular uprising two years ago. Officials at some ministries and agencies of government have defied the new junta, refusing to step down or hand over duties. They have declared a general strike, along with unions in sectors from health care to aviation, although officials say they will continue to supply flour, gas and emergency medical care. Khartoum's main market, banks and filling stations were still closed on Thursday.

Hospitals gave only emergency services. Smaller shops were open, with long lines for bread. U.N. special representative to Sudan Volker Perthes has offered to facilitate dialogue between al-Burhan and Hamdok.

The former premier, initially held at al-Burhan's residence, was allowed to return home under guard on Tuesday. A source close to him said he remains committed to a civilian democratic transition and the goals of the revolt that toppled al-Bashir.

A group of ministers from the toppled government attempted to visit Hamdok on Thursday but were turned away, said irrigation minister Yasir Abbas. With authorities restricting internet and phone signals, protesters have been handing out fliers calling for a "march of millions" on Saturday under the same slogan – "Leave!" – from the protests that brought down al-Bashir.

Sudan is in the midst of a deep economic crisis with record inflation and shortages of basics. Improvement relies on aid that Western donors say will end unless the coup is reversed. More than half the population is in poverty and child malnutrition stands at 38%, according to the United Nations.

Al-Burhan's move reasserted the army's dominant role in Sudan since independence in 1956, after weeks of friction between the military and civilians over issues including whether to hand al-Bashir and others to The Hague to face charges of war crimes. Al-Burhan has said he acted to prevent civil war and has promised elections in July 2023.

Western envoys had warned al-Burhan that assistance, including a now frozen $700 million in U.S. aid and $2 billion from the World Bank, would cease if he took power. Sources said he ignored those warnings under pressure from inside the military and with a "green light" from Russia.

State broadcaster Sudan TV said on Thursday that the civilian-appointed heads of the state-run Sudan News Agency (SUNA) and the TV and radio corporation had been replaced. The offices of Al-Democrati, a paper that had been critical of the military of late, had been raided, the paper's deputy chairperson said.

Biden said he admired the courage of Sudanese. "We believe strongly in Sudan's economic potential and the promise of its future – if the military and those who oppose change do not hold it back," he said.