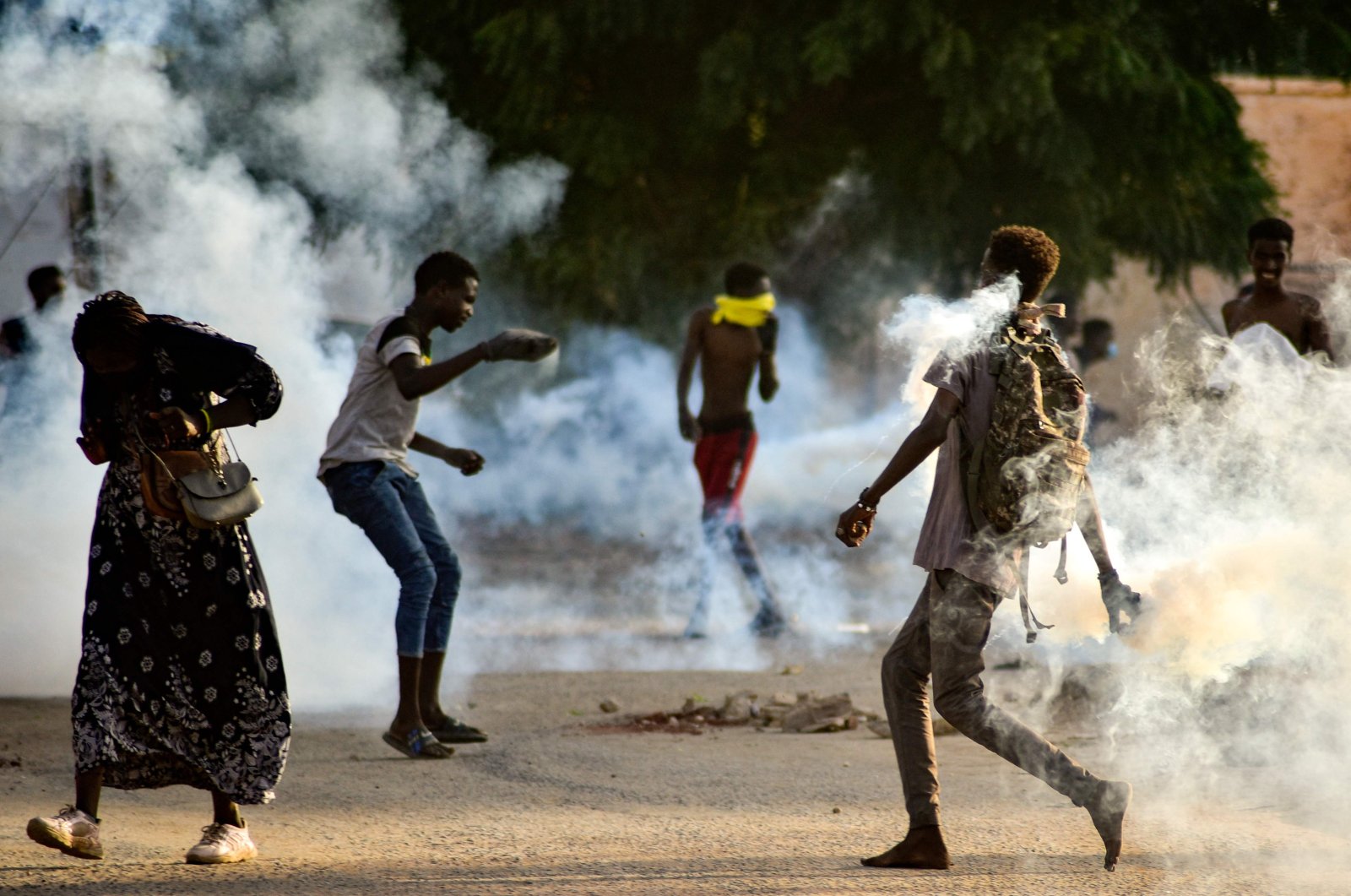 Sudanese youths confront security forces amidst tear gas fired by them to disperse protesters in the capital Khartoum amid ongoing demonstrations against a military takeover that has sparked widespread international condemnation, Khartoum, Sudan, Oct. 27, 2021. (AFP Photo)
by ASSOCIATED PRESS Oct 28, 2021 10:57 am

Sudanese junta kicks out a number of ambassadors, less than a week after toppling the country's Prime Minister Abdalla Hamdok and his government in the coup which is widely unpopular across the world and in Sudan

Sudan’s strongman fired at least six ambassadors, including the envoys to the United States, European Union and France, after they condemned the military's takeover of the country, a military official said Thursday.

The diplomats pledged their support for the now-deposed government of Prime Minister Abdalla Hamdok.

Also fired by Gen. Abdel-Fattah al-Burhan late Wednesday were the Sudanese ambassadors to Qatar, China and the U.N. mission in Geneva, according to the official, who spoke on condition of anonymity because he was not authorized to brief media. The state-run Sudan TV also reported the dismissals.

The ambassadors were fired three days after al-Burhan dissolved the transitional government and detained the prime minister, many government officials and political leaders in a coup condemned by the U.S. and the West. The military allowed Hamdok to return home Tuesday after international pressure for his release.

Al-Burhan said the military forces were compelled to take over because of quarrels between political parties that he claimed could lead to civil war. However, the coup also comes just weeks before al-Burhan would have had to hand over the leadership of the Sovereign Council, the ultimate decision-maker in Sudan, to a civilian, in a step that would reduce the military's hold on the country.

The coup threatens to halt Sudan’s fitful transition to democracy, which began after the 2019 ouster of long-time ruler Omar al-Bashir and his government in a popular uprising.

The takeover came after weeks of mounting tensions between military and civilian leaders over the course and pace of that process.

Ali bin Yahia, Sudan’s envoy in Geneva, was defiant after his dismissal.

"I will spare no efforts to reverse the situation, explain facts and resist the blackout imposed by coup officials on what is happened my beloved country,” he said in video comments posted online.

Nureldin Satti, the Sudanese envoy to the U.S., said Tuesday he was working with Sudanese diplomats in Brussels, Paris, Geneva and New York to "resist the military coup in support of the heroic struggle of the Sudanese people” to achieve the aims of the uprising against al-Bashir.

Earlier this week, a group of over 30 Sudanese diplomats in and outside Sudan condemned the military’s takeover in a joint statement, saying that the ambassadors in Belgium, Switzerland and France had pledged their continued allegiance to the Hamdok government.

The Ministry of Culture and Information, still loyal to Hamdok, said in a Facebook post that the ambassador to South Africa is also part of this group.

In another development, al-Burhan fired Adlan Ibrahim, head of the country’s Civil Aviation Authority (SCAA), according to the official. Adlan’s dismissal came after the resumption of flights in and out of Khartoum’s international airport resumed Wednesday. It was not immediately clear if Ibrahim's dismissal was linked to the reopening of the airport or whether the decision was made before then.

The airport remained open Thursday morning. The country’s SCAA initially said flights would be suspended until Saturday, the day of a planned mass protest against the coup, but then reopened the airport Wednesday.

Protesters, meanwhile, took to the streets of Khartoum and its twin city of Omdurman late Wednesday in continued demonstrations against the coup amid heavy security across the capital. No casualties were reported, but a young man died in a Khartoum hospital late Wednesday of wounds sustained in Monday’s protests, according to activist Nazim Siraj.

This raised to seven the number of protesters killed since Monday. More than 140 people have been wounded since the military’s takeover, according to the activist.