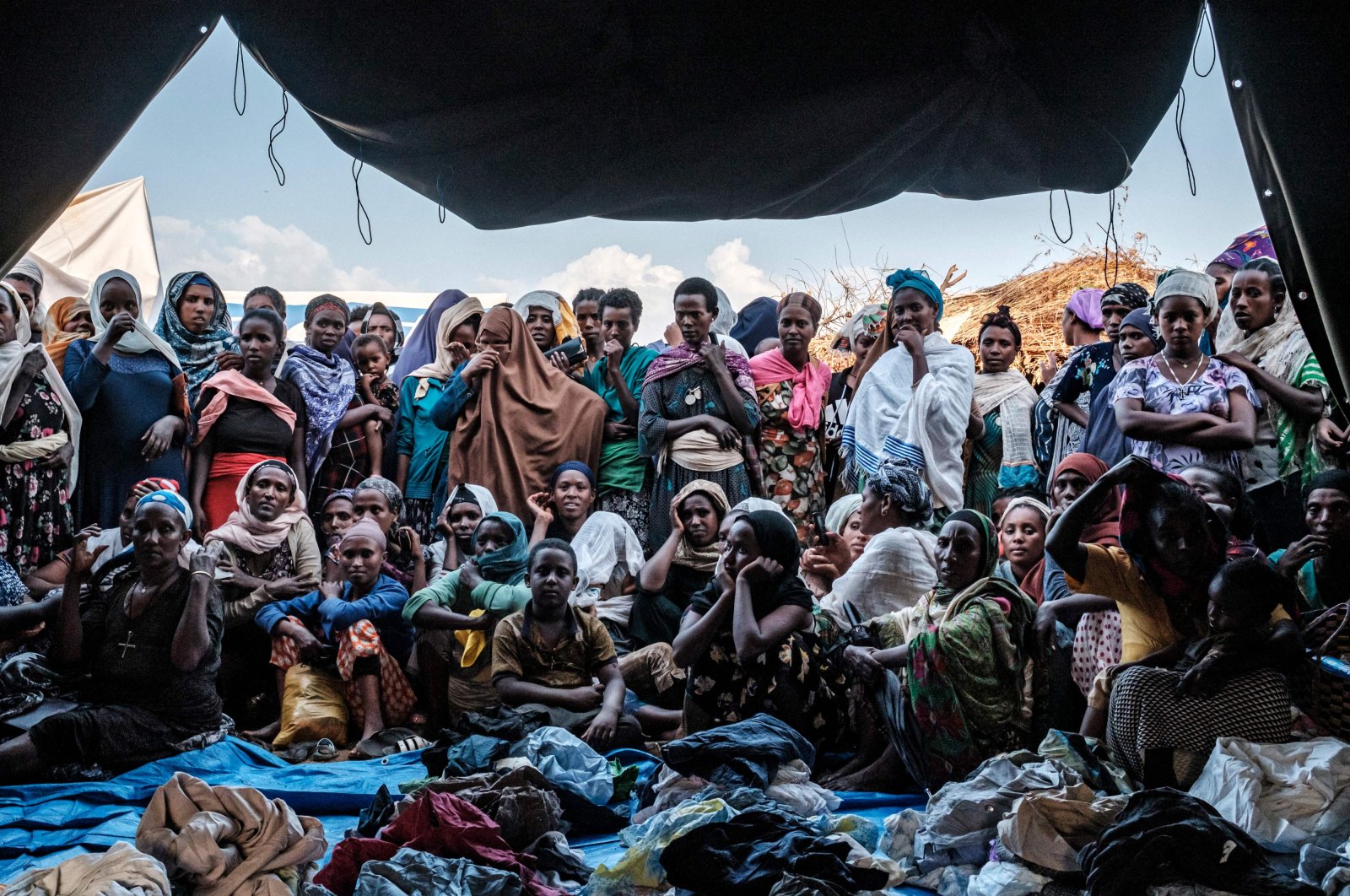 Internally Displaced People (IDP), fleeing from violence in the Metekel zone in Western Ethiopia, gather outside a tent where clothes are being distributed at a camp in Chagni, Ethiopia. Jan. 26, 2021. (AFP Photo)
by French Press Agency - AFP Apr 27, 2021 4:15 pm
RECOMMENDED

He said the move came in response to TPLF attacks on army camps and that fighting would be over quickly.

But as the war drags on, world leaders are increasingly concerned about, what United States Secretary of State Antony Blinken Monday called, an impending humanitarian "disaster" – and the role of Eritrean troops in exacerbating it.

Those concerns have been echoed in multiple presentations given to aid groups this month by the Emergency Coordination Centre of Tigray's Abiy-appointed interim government – copies of which the Agence France-Presse (AFP) has reviewed.

The most recent presentation, dated April 23, says Eritrean soldiers had forced aid workers providing food relief out of multiple parts of Tigray, including the areas of Samre and Gijet south of the regional capital Mekele.

It says that Eritrean soldiers have also started "showing up" at food distribution points in Tigray, looting the supplies after "our beneficiaries became frightened and (ran) away."

An official who attended the April 23 presentation, and who spoke to AFP on condition of anonymity for fear of reprisals, said aid workers were visibly frustrated over their inability to access parts of the region.

"Some of the NGO workers were crying because of the systemic denial ... some of them were screaming, crying," the official said, adding that government officials coordinating relief efforts were also fed up.

"(There is) No way that Eritrea can block humanitarian assistance or loot them," he told AFP in an email.

However, General Yohannes Gebremeskel Tesfamariam, head of a command post in Tigray, told AFP Tuesday that in the "last two weeks we had access problems passing some of the checkpoints, especially ones controlled by Eritreans."

He referenced a critical checkpoint linking the towns of Adigrat and Axum as an example.

"We have sent our staff to talk to the Eritrean commanders who are commanding those troops at the checkpoint. We are waiting to hear their reply," Yohannes said.

Mulu Nega, head of Tigray's interim government, told AFP Tuesday that "people are complaining about the roads and food distribution" and said his officials were investigating.

Fighting in Tigray disrupted the harvest in a region that was already food insecure.

Abiy's government said in mid-April that no one had died from hunger during the war.