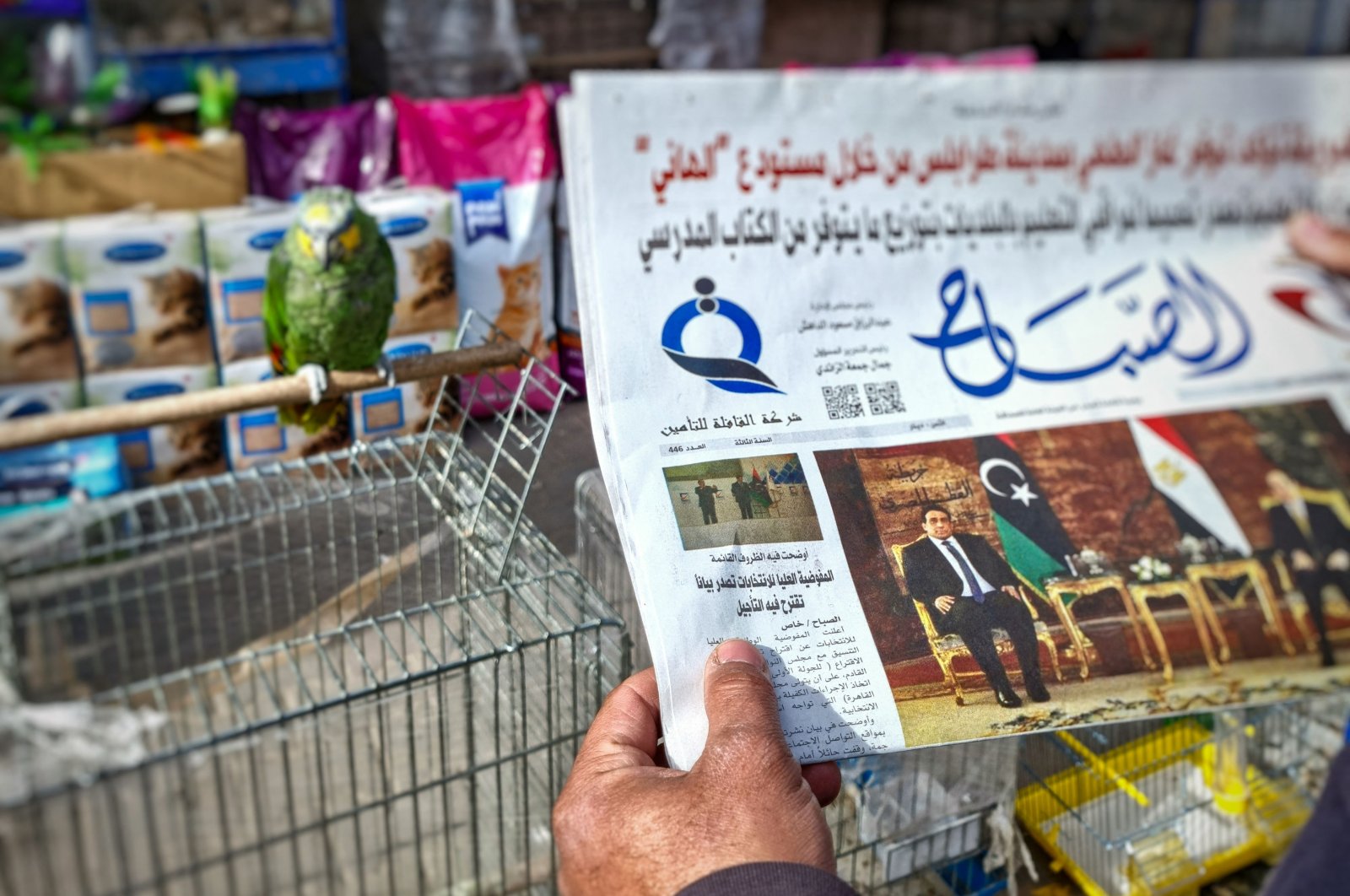 A man reads a local newspaper in the Libyan capital Tripoli, on Dec. 23, 2021, with an article on its front page about the postponement of the country's presidential elections. (AFP Photo)
by Daily Sabah with AFP Dec 23, 2021 6:00 pm
RECOMMENDED

After the poll in which Libyans were meant to elect a president was delayed amid intense rivalries, U.N. failures and legal issues, the Libyan parliament will meet on Monday to debate a new timeline, an official said.

The House of Representatives had on Wednesday deemed the vote, meant to draw a line under years of conflict in the North African nation, "impossible" to hold on time.

On Thursday, the parliamentary source who asked to remain anonymous told Agence France-Presse (AFP) that a committee had been formed to set out a new roadmap.

The official said the assembly may propose reshuffling or replacing the current unity government.

The poll was meant to take place just over a year after a landmark east-west cease-fire in a country that has seen a decade of conflict since the 2011 revolt that overthrew dictator Moammar Gadhafi.

But the run-up to the country's first-ever presidential election has been overshadowed by angry disputes over its legal basis and the candidacies of several controversial figures including Gadhafi's son, Saif al-Islam.

One point of contention was a presidential elections law controversially passed by speaker Aguila Saleh, which critics say bypassed due process and favored a run by his ally, eastern putschist Gen. Khalifa Haftar.

The law was strongly opposed by factions in western Libya, where Haftar had waged a year-long battle to seize Tripoli.

The electoral board has suggested pushing the vote back by a month to Jan. 24, but given the animosity between the eastern-based parliament and authorities in Tripoli, agreeing on a new date will be far from easy.

The delay is also embarrassing for the United Nations, which had shepherded the October 2020 ceasefire and a dialogue process intended to help stabilize the country.

The world body's envoy Jan Kubis quit just a month before the polls, and American diplomat Stephanie Williams was appointed as the U.N. secretary-general's special adviser on Libya.

Williams has been in Libya for several days meeting with presidential candidates.

On Thursday, she met Saleh, and "welcomed his commitment for the continuation of the electoral process," according to her Twitter feed.

"In no way should the current challenges in the electoral process be used to undermine the stability and progress that has been made in Libya over the past fifteen months. I strongly urge the relevant institutions and all political actors to focus on the electoral process and on creating political and security conditions to ensure the holding of inclusive, free, fair, peaceful and credible elections, the outcome of which is acceptable to all parties," Williams said in a written statement.

Libyans have voiced a mix of frustration and anxiety after elections set for Friday were postponed, which some had hoped would help turn the page on a decade of violence.

"I had picked up my voting card and I was waiting for the election," said trader Nabil al-Sharef, sat at a cafe in Tripoli, the capital in the west.

"For me, this delay is a setback and a disappointment," the 51-year-old said.

The delay will be a disappointment to some 2.5 million Libyans who had collected their voter cards, out of a population of seven million.

But for Sharef, the situation could get a lot worse.

"I'm waiting for the war to break out again, because each faction only serves its own interests, and the people who were against the elections are backed by armed groups," he said.

The delay is another setback in Libya's interminable transition, after 42 years of dictatorship and a decade of civil war.

The rule of Gadhafi from 1969-2011 was marked by brutal repression, but Libyans did benefit from a generous welfare system paid for by revenues from Africa's biggest oil reserves.

But the revolt that toppled Gadhafi turned into a complex war dragging in mercenaries and foreign powers, and the country's infrastructure and economy steadily degraded.

Electricity cuts and runaway inflation have become the norm.

In Tripoli, the interim government of Abdul Hamid Dbeibah has been working to sign reconstruction contracts and revive the city, heavily damaged by Haftar's 2019-2020 attack.

Were those efforts all in vain?

If it does, "normal citizens will pay the price," he said.

At the other end of the country in Benghazi, the birthplace of the uprising against Gadhafi, residents face similar problems.

Engineer Mohamed El-Jadi says he took part in the revolution in the hope of "more freedom and prosperity."

El-Jadi said he was disappointed by the delay to the elections.

"Our standard of living has dropped, our salaries haven't changed despite inflation and we're living in an unstable environment," he said.

"The main players in the conflict, who mostly then decided to stand in the elections, knew they had little chance of winning. That's why they disrupted it," he said.