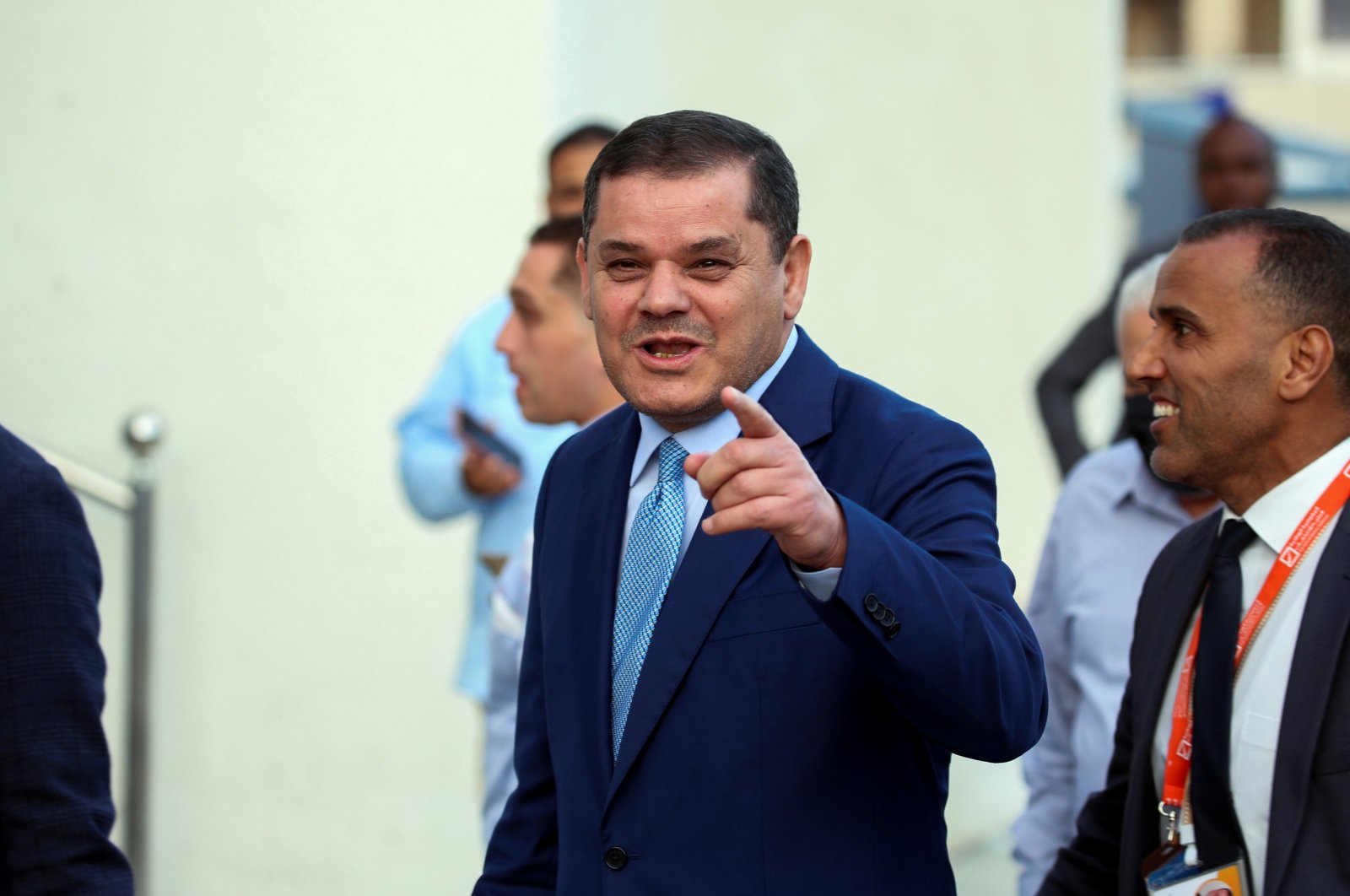 Libyan Prime Minister Abdul Hamid Dbeibah gestures as he arrives to submit his candidacy papers for the upcoming presidential election at the headquarters of the electoral commission in Tripoli, Libya, Nov. 21, 2021. (Reuters Photo)
by DAILY SABAH WITH AGENCIES Nov 21, 2021 8:25 pm
RECOMMENDED

Libya's interim Prime Minister Abdul Hamid Dbeibah registered as a candidate to run for president in the next month's elections, reports said Sunday.

Libya's first ever direct presidential poll, due on Dec. 24, comes as the United Nations seeks to end a decade of violence in the oil-rich nation since a NATO-backed uprising that toppled and killed Gadhafi in 2011.

Dbeibah signed documents at the High National Election Commission (HNEC) in the capital Tripoli, in footage broadcast live by state television, the day before the deadline for registration.

A wealthy businessperson from the western port city of Misrata, the 62-year-old political newcomer was designated as interim prime minister in February in a U.N.-led process, to steer the country to legislative and presidential elections.

Doubt had persisted about whether he would present his candidacy but on Thursday he submitted an assets declaration – one of the prerequisites for prospective presidential candidates.

Last week, Dbeibah said he will run for president if that is what the Libyan people want. He also rejected electoral laws passed last month by the eastern-based House of Representatives, saying they are designed to suit only certain people.

Gadhafi is wanted by the International Criminal Court for alleged war crimes, while many in western Libya despise Haftar after his year-long assault on Tripoli, accusing the military commander of seeking to establish a military dictatorship.

The chief prosecutor of the International Criminal Court (ICC) reported that the failed offensive by Haftar on the capital Tripoli involved a pattern of violence and the use of mines by retreating forces that harmed civilians, which is a war crime when used indiscriminately.

Haftar’s offensive, supported by Egypt, France the United Arab Emirates (UAE) and Russia, collapsed in June when militias backing the Tripoli government, with support from Turkey, gained the upper hand.

Pro-Haftar forces remain in control of much of eastern and southern Libya, and some analysts have voiced skepticism over the chances of a free and fair election.

Nearly three million Libyans – out of a total population of some seven million people – have so far registered to vote.

Both presidential and legislative polls had been slated for Dec. 24, but in early October parliament split the dates of the vote by postponing legislative elections until January.

The path to the ballot box has been lined with disputes over the constitutional basis for the polls and the powers to be given to whoever wins.

In September, Saleh ratified a contentious electoral law criticized for bypassing due process and favoring a bid by Haftar.

Saleh on Saturday rejected controversy around the move and said the rules were not "tailor-made" to suit anyone.

Hundreds of Libyans protested in Tripoli on Friday against "war criminals" running in next month's presidential election.

Demonstrators stamped on posters of Haftar and Seif al-Islam, voicing anger over the controversial electoral law.