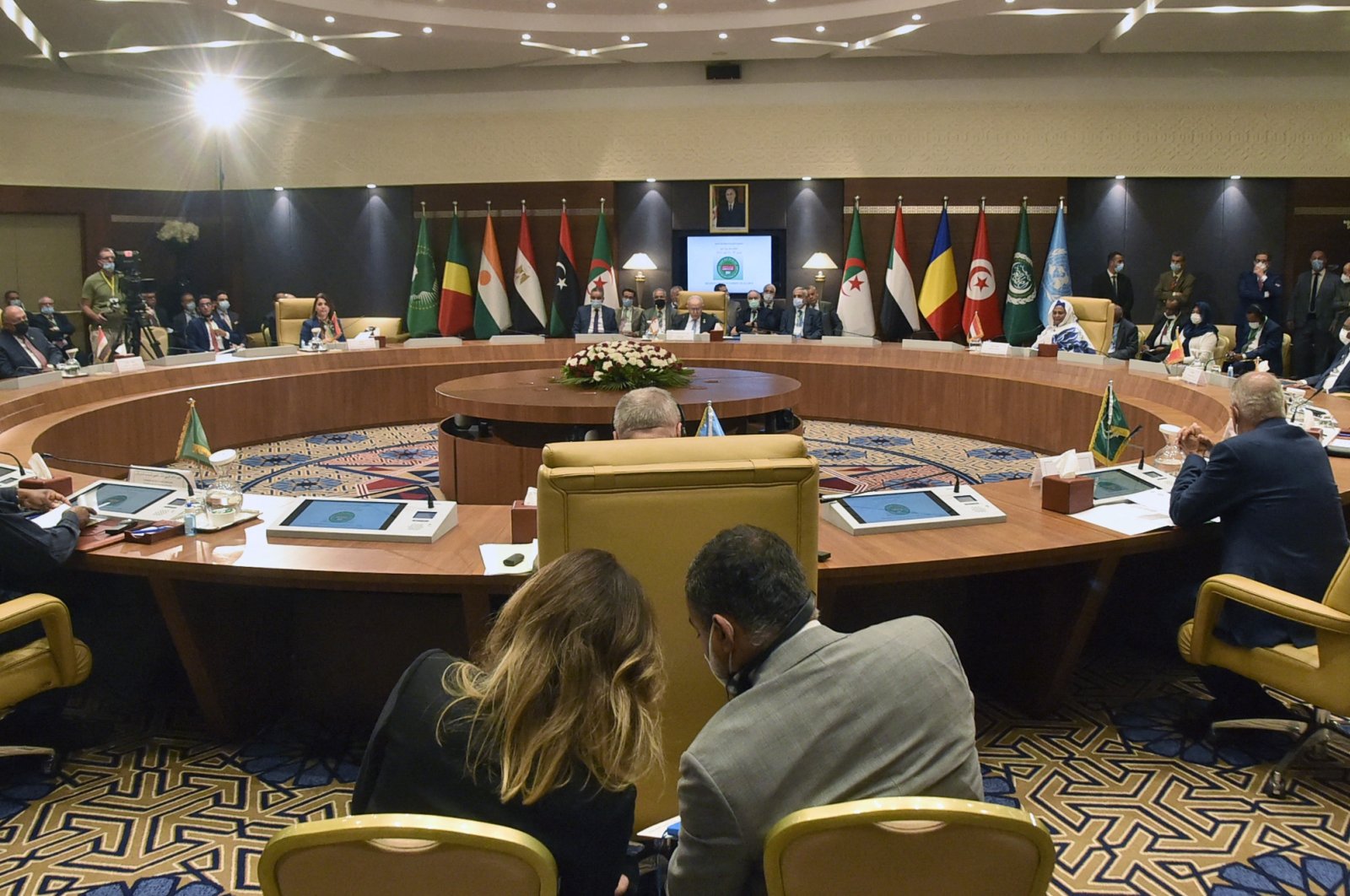 Officials attend a meeting by Libya's neighbors as part of international efforts to reach a political settlement to the country's conflict, in the Algerian capital Algiers, Aug. 30, 2021. (AFP Photo)
by DAILY SABAH WITH AGENCIES
Sep 01, 2021 8:15 am

Countries neighboring Libya urged foreign fighters to leave the war-torn North African country on the last day of a meeting held in Algeria on Tuesday.

In the two-day meeting, Libyan parties were also urged to stick to a political road map that ended hostilities last year and set parliamentary and presidential elections in December.

The meeting, hosted by Algeria, was attended by the foreign ministers of Egypt, Tunisia, Sudan, Chad and Niger – countries that have been concerned about the chaos in Libya for years. The U.N. envoy for Libya, Jan Kubis, Arab League Secretary-General Ahmed Aboul Gheit and a representative of the African Union were also in attendance.

“The question of the withdrawal of mercenaries, terrorists and irregular forces is a fundamental question that conditions the success of the elections,” said Algerian Foreign Minister Ramtane Lamamra at a news conference.

“Libya is the first victim of these irregular elements and the risk is real that neighboring countries also become victims if the withdrawal is not handled in a transparent, organized way."

Algeria, which shares a long border with Libya, is ready to play a role, he said.

The Libyan parliament has so far failed to agree on a legal framework to hold elections.

Kubis, the U.N. envoy, urged lawmakers to finalize laws needed for the December vote “without any further delay.”

He also expressed concerns about the continued presence of mercenaries, foreign fighters and foreign forces in Libya, echoing the U.N. Security Council’s calls for the full implementation of the October cease-fire deal including the withdrawal of foreign troops and mercenaries.

The U.N. estimated in December there were at least 20,000 foreign fighters and mercenaries in Libya, including Syrians, Russians, Sudanese and Chadians.

“Libya is at a critical stage where the significant achievements and progress of the past period must be consolidated with an added momentum to continue the political transition towards a unified, fully sovereign, peaceful and stable country,” Kubis said.

Under a U.N.-backed cease-fire signed Oct. 23, foreign troops and mercenaries were to pull out of Libya within three months. That deadline passed with no movement announced or observed on the ground.

The U.N. estimates there are some 20,000 foreign troops and mercenaries in Libya helping the warring factions: the U.N.-recognized Government of National Accord (GNA) in Tripoli and putschist Gen. Khalifa Haftar in the east.

Foreign mercenaries and arms have poured into the country since Haftar launched his offensive, with Russia and the United Arab Emirates (UAE) serving as the putschist general's top suppliers.

The Russian Wagner Group, which is owned by entrepreneur Yevgeny Prigozhin, a figure close to Russian President Vladimir Putin, is known as one of the main groups to have sent mercenaries to Libya to fight.

Back in July 2020, President Recep Tayyip Erdoğan state that foreign mercenaries were the root of the problems in Libya.

There are several thousand mercenaries from both Syria and Sudan operating in Libya, as well as about 1,000 from Chad, a diplomat told Agence France-Presse (AFP) on condition of anonymity.

In the Libyan conflict, Russia, along with France, Egypt and the UAE, has supported Haftar against the legitimate Libyan government, backed by Turkey and Qatar.