Mercenaries remain in Libya despite deadline, calls for departure 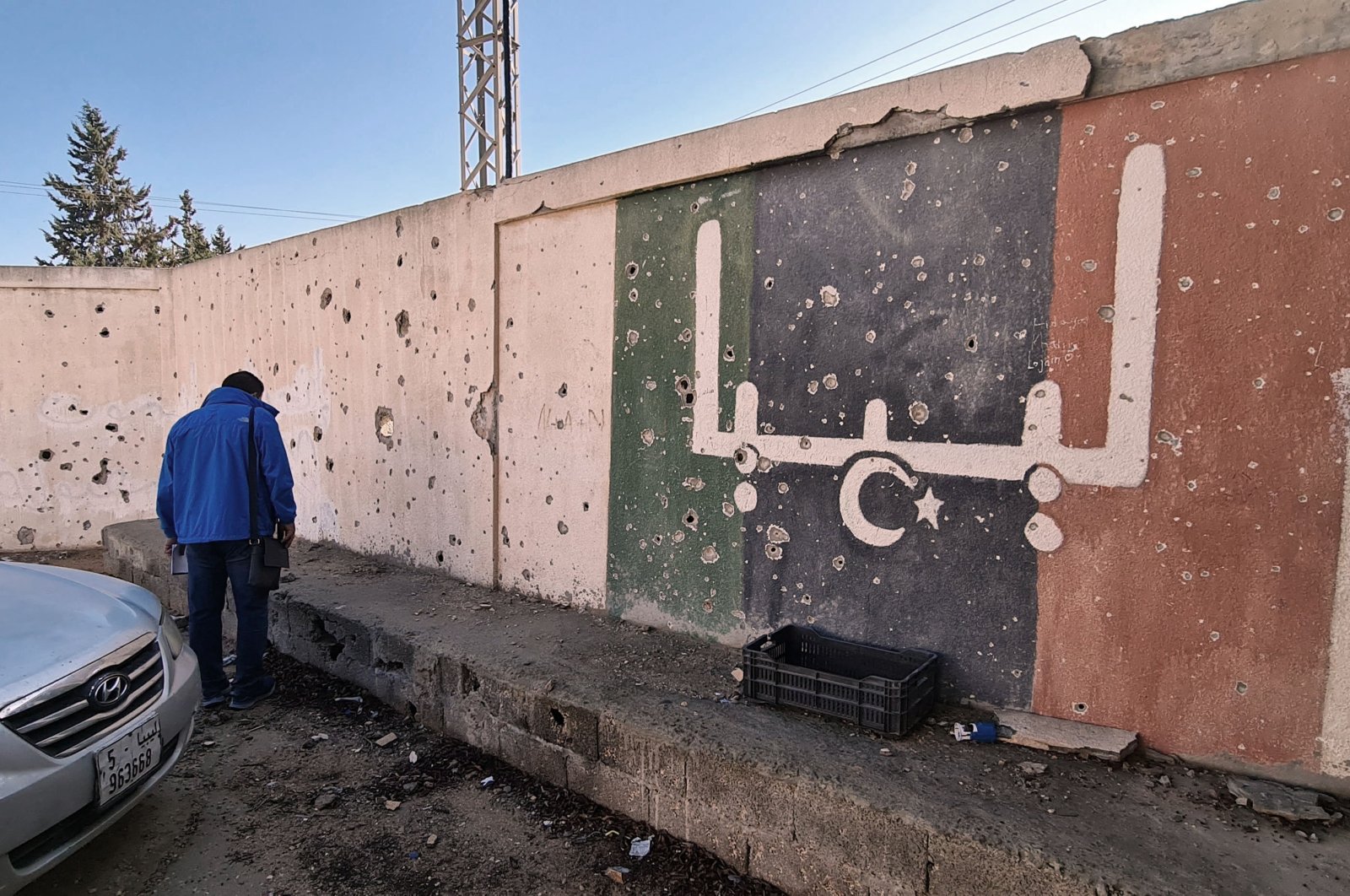 A Libyan stands in front of a school, which was damaged during fighting between rival factions, in the capital Tripoli's suburb of Ain Zara, Nov. 19, 2020. The writing on the wall reads "Libya" in Arabic. (AFP Photo)
by DAILY SABAH Jan 24, 2021 11:35 am

With the deadline for foreign mercenaries to vacate Libya having passed as of Saturday, no definitive action has been observed on the ground and the fighters still pose a threat to the ongoing political process trying to put an end to the years of conflict in the country

The deadline for the departure of foreign mercenaries from Libya under an October cease-fire passed as of Saturday but calls to accelerate the process continue as no movement has been announced or observed on the ground.

The U.N. Support Mission in Libya (UNSMIL) and an international follow-up group underlined their support for the cease-fire deal on Saturday.

"The participants reiterated their full and continued commitment to the implementation of the 23 October 2020 ceasefire agreement as the deadline set draws near for the departure of all foreign fighters and mercenaries from Libya," the mission said in a statement.

They called on Libyan leaders to accelerate the implementation of the cease-fire, including the "immediate repatriation of all foreign fighters and mercenaries."

The co-chairs of the International Follow-Up Committee for Libya Security Working Group (SWG), represented by the African Union, France, Italy, Turkey, the United Kingdom and UNSMIL met on Jan. 20 with the 5+5 Joint Military Commission (JMC).

The co-chairs urged Libyan parties to “take all necessary measures to accelerate the implementation of the cease-fire, prioritizing the opening of the Coastal Road between Abu Grein and Sirte, as well as the immediate repatriation of all foreign fighters and mercenaries.”

They also reiterated their commitment to facilitating the work of the 5+5 JMC through enhanced cooperation and their continued support of the political process.

U.N. Secretary-General Antonio Guterres last week urged all "regional and international actors to respect the provisions" of the Oct. 23 cease-fire accord that set out a withdrawal within three months of all foreign troops and mercenaries.

In recent months, there has been a flurry of international efforts to end Libya's nearly decadelong conflict.

On Saturday, delegates from the GNA and the rival parliament in eastern Libya said they reached an agreement on filling key state posts, including Libya's central bank governor, the head of an anti-corruption watchdog and an election commission, at talks in the Moroccan resort of Bouznika until Feb. 2.

Rival parties also agreed to form working groups for the candidacy process for the posts, which have long been points of contention, the statement added.

Once finalized, the candidacies will be presented to representatives of the two sides.

At separate talks earlier this week, Libyan envoys at U.N.-led talks in Egypt agreed to hold a constitutional referendum ahead of the elections planned for later in the year. A fresh round of talks will be held in Egypt next month in which the "road map for the referendum and elections" will be decided upon.

Turkey on Friday welcomed the agreement reached by the Libyan Political Dialogue Forum (LPDF) selecting the mechanism of the new executive authority that will remain in office until the elections as well as the announcement of the schedule for the prompt finalization of the process.

"Turkey, which attaches importance to Libya’s sovereignty, integrity and politcal unity, wishes the selection of a new unified executive authority soon. The prompt formation of a unified executive authority bears great importance not only for the preparations of the general elections planned to be held on 24 December 2021 but also for addressing the urgent needs of the friendly and brotherly Libyan people in the face of the deteriorating humanitarian situation caused by the aggression on Tripoli that started in April 2019 and the following oil blockade," the foreign ministry said in a written statement. It highlighted the leading role Turkey played in the Berlin conference through its constructive contributions, adding that its implementation of the conference's conclusions helped ensure the cease-fire, balancing the situation on the ground and allowing for the resumption of the political process.

Oil-rich Libya was plunged into chaos after a 2011 NATO-backed uprising toppled and killed longtime dictator Moammar Gadhafi and split the country between the GNA and Haftar’s forces.