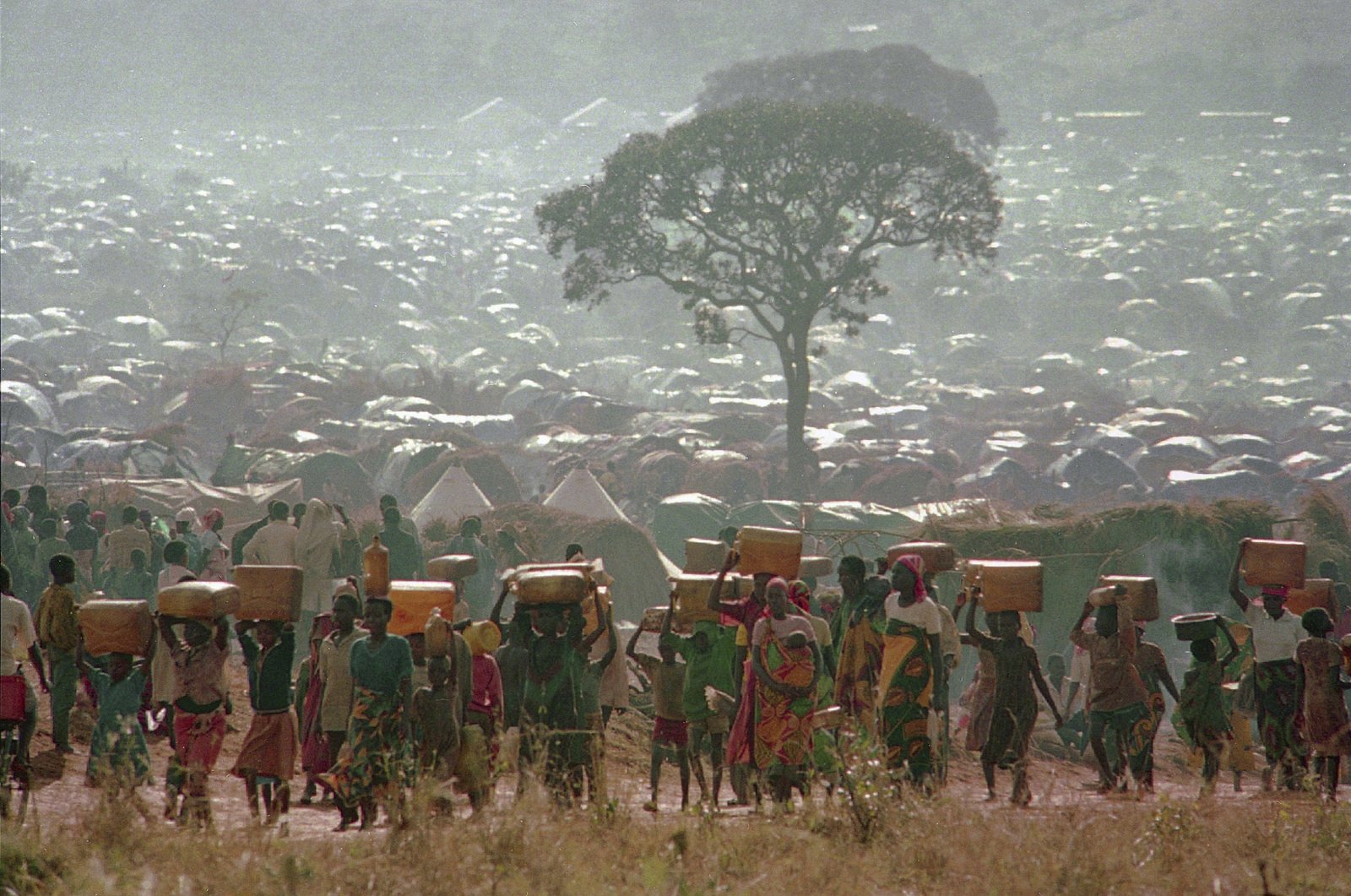 Refugees who fled the ethnic bloodbath in neighboring Rwanda carry water containers back to their huts at the Benaco refugee camp in Tanzania, near the border with Rwanda, May 17, 1994. (AP Photo)
by ASSOCIATED PRESS Apr 19, 2021 2:17 pm
RECOMMENDED

France bears "significant" responsibility for "enabling a foreseeable genocide," a report that outlines the French government's role in the 1994 events, in which an estimated 800,000 people were slaughtered, has found.

The report, commissioned by the Rwandan government, comes amid efforts by Rwanda to document the role of French authorities before, during, and after the genocide, part of the steps taken by France’s President Emmanuel Macron to improve relations with the central African country.

The 600-page report says that France “did nothing to stop” the massacres, in April and May 1994, and in the years after the genocide tried to cover up its role and even offered protection to some perpetrators.

It is to be made public later on Monday after its formal presentation to Rwanda's Cabinet.

It concludes that in years leading up to the genocide, former French President Francois Mitterrand and his administration had knowledge of preparations for the massacres – yet kept supporting the government of then-Rwandan President Juvenal Habyarimana despite the “warning signs.”

“The French government was neither blind nor unconscious about the foreseeable genocide,” the authors stress.

The Rwandan report comes less than a month after a French report, commissioned by Macron, concluded that French authorities had been “blind” to the preparations for genocide and then reacted too slowly to appreciate the extent of the killings and to respond to them. It concluded that France had “heavy and overwhelming responsibilities” by not responding to the drift that led to the slaughter that killed mainly ethnic Tutsis and the moderate Hutus who tried to protect them. Groups of extremist Hutus carried out the killings.

The two reports, with their extensive even if different details, could mark a turning point in relations between the two countries.

“Maybe the most important thing in this process is that those two commissions have analyzed the historical facts, have analyzed the archives which were made available to them and have come to a common understanding of that past,” he said. “From there we can build this strong relationship.”

The Rwandan report, commissioned in 2017 from the Washington law firm of Levy Firestone Muse, is based on a wide range of documentary sources from governments, nongovernmental organizations (NGOs) and academics including diplomatic cables, documentaries, videos, and news articles. The authors also said they interviewed more than 250 witnesses.

In the years before the genocide, “French officials armed, advised, trained, equipped, and protected the Rwandan government, heedless of the Habyarimana regime’s commitment to the dehumanization and, ultimately, the destruction and death of Tutsi in Rwanda,” the report charges.

French authorities at the time pursued “France’s own interests, in particular the reinforcement and expansion of France’s power and influence in Africa.”

In April and May 1994, at the height of the genocide, French officials “did nothing to stop” the massacres, says the report.

Operation Turquoise, a French-led military intervention backed by the U.N. which started on June 22, "came too late to save many Tutsi,” the report says.

Authors say they found “no evidence that French officials or personnel participated directly in the killing of Tutsi during that period.”

This finding echoes the conclusion of the French report that cleared France of complicity in the massacres, saying that “nothing in the archives" demonstrates a “willingness to join a genocidal operation.”

The Rwandan report also addressed the attitude of French authorities after the genocide.

Over the past 27 years, “the French government has covered up its role, distorted the truth, and protected” those who committed the genocide, it says.

The report suggests that French authorities made “little efforts” to send to trial those who committed the genocide. Three Rwandan nationals have been convicted of genocide so far in France.

Under French law, documents regarding military and foreign policies can remain classified for decades.

But things may be changing, the Rwandan report says, mentioning “hopeful signs.”

On April 7, the day of commemoration of the genocide, Macron announced the decision to declassify and make accessible to the public the archives from 1990 to 1994 that belong to the French president and prime minister's offices.

“Recent disclosures of documents in connection with the (French) report ... may signal a move toward transparency,” authors of the Rwandan report said.

President Paul Kagame of Rwanda praised the report commissioned by Macron as “a good thing,” welcoming efforts in Paris to “move forward with a good understanding of what happened."

Felicien Kabuga, a Rwandan long wanted for his alleged role in supplying machetes to the killers, was arrested outside Paris last May.

And in July an appeals court in Paris upheld a decision to end a yearslong investigation into the plane crash that killed Habyarimana and set off the genocide. That probe aggravated Rwanda’s government because it targeted several people close to Kagame for their alleged role, charges they denied.

Last week, a Rwandan priest was arrested in France for his alleged role in the genocide, which he denied.