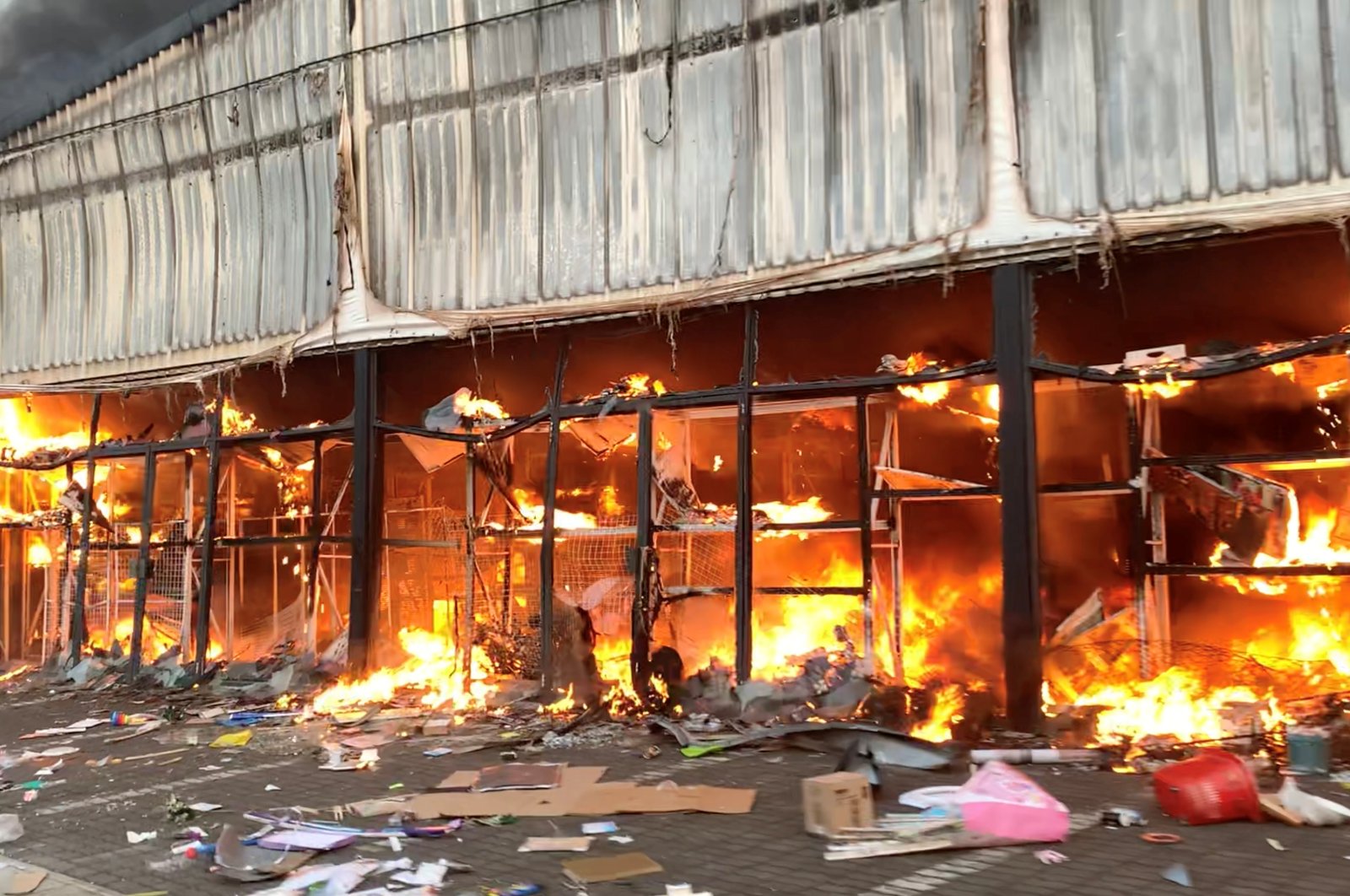 A fire engulfs Campsdrift Park, which houses Makro and China Mall, following protests that have widened into looting in Pietermaritzburg, South Africa, July 13, 2021, in this screen grab taken from a video obtained from social media. (Courtesy Sibonelo Zungu via Reuters)
by Agencies Jul 14, 2021 11:51 am

More than 70 people have been killed and over 1,200 arrested over six consecutive days as South Africa is rocked by violence and looting following the jailing of former President Jacob Zuma

Crowds looted shops and businesses in South Africa on Wednesday, defying government calls for an end to a week of violence that has killed more than 70 people, wrecked hundreds of businesses and shut down a refinery.

Protests that followed the jailing of ex-President Jacob Zuma last week for failing to appear at a corruption inquiry have widened into looting and an outpouring of general anger over the hardship and inequality that persist 27 years after the end of the apartheid.

Shopping malls and warehouses have been ransacked or set ablaze in several cities, mostly in Zuma's home in KwaZulu-Natal (KZN) province, the country's biggest city Johannesburg and surrounding Gauteng province. But overnight it spread to two other provinces – Mpumalanga, just east of Gauteng, and Northern Cape, police said in a statement.

A Reuters photographer saw several shops being looted in the town of Hammersdale, Mpumalanga, on Wednesday. Local TV stations meanwhile showed more looting of shops in South Africa's largest township Soweto, and in the port city of Durban. South Africa's largest refinery SAPREF in Durban has been temporarily shut down due to the unrest, an industry official said on Wednesday.

Aerial footage showed hundreds of people looting a large shopping center and carting off huge boxes of goods. A woman was seen throwing her baby from the first floor of a building to save her from fire after shops below her apartment were set on fire. The child safely landed with a group of people on the street.

The United Nations in South Africa expressed concern that the violence was disrupting transport for workers and medical staff and causing shortages of food, medicine and other essential products.

"This will exacerbate the already social and economic hardships caused by joblessness, poverty and inequality in the country," it said in a statement on Tuesday night. Security officials said on Tuesday the government was working to halt the spread of the violence and looting.

The national prosecuting authority has said it will punish those caught looting or destroying property, a threat that so far has done little to deter them. The armed forces reported sending 2,500 soldiers to help the overwhelmed police. But these numbers are dwarfed by the more than 70,000 troops deployed to enforce last year's coronavirus lockdown, and only a handful of soldiers were seen at some shopping centers.

The raging unrest first erupted last Friday after Zuma started serving a 15-month term for contempt, having snubbed a probe into the corruption that stained his nine years in power.

"The total number of people who have lost their lives since the beginning of these protests ... has risen to 72," the police said in a statement late Tuesday. Most of the deaths "relate to stampedes that occurred during incidents of looting of shops," it said. Others were linked to shootings and explosions of bank ATMs. The number of arrests has risen to 1,234, although many thousands have been involved in the ransacking sprees.

Earlier TV footage showed dozens of women, some wearing their dressing gowns, men and even children strolling into a butcher in Soweto, coming out balancing heavy boxes of frozen meat on their heads or shoulders. Police showed up three hours later and fired rubber bullets. Soldiers eventually followed.

Looters who spoke to Agence France-Presse (AFP) said they had got caught up in the rush or saw the chance to ease a life blighted by poverty.

"I'm really not concerned about Zuma. He is a corrupt old man that deserves to be in jail," said a 30-year-old man who works at a car wash. He admitted to "taking things from the shop for my mum" – stainless-steel pots, meat and groceries.

In his nationwide address Monday night, Ramaphosa lashed out at "opportunistic acts of criminality, with groups of people instigating chaos merely as a cover for looting and theft."

"The path of violence, of looting and anarchy, leads only to more violence and devastation," Ramaphosa said. The chair of the African Union Commission condemned "the surge of violence that has resulted in the deaths of civilians and appalling scenes of the looting," calling "for an urgent restoration of order."

The largest opposition party, the Democratic Alliance, announced Tuesday it would file criminal charges against Zuma's children and the leader of the leftist Economic Freedom Fighters (EFF), Julius Malema. In a statement, the party accused them of using "social media to express comments which appear to encourage and incite the violence and looting."

Once dubbed the "Teflon president," Zuma was handed the jail term on June 29 by the Constitutional Court for bucking an order to appear before a commission probing the graft that proliferated under his administration. He started serving the term on Thursday after handing himself in to authorities. He is seeking to have the ruling set aside.

Zuma, 79, is a former anti-apartheid fighter who spent 10 years in jail in the notorious Robben Island jail off Cape Town. He rose in democratic South Africa to vice president and then president, before being ousted by the ruling African National Congress (ANC) in 2018 as scandals proliferated. But he remains popular among many poor South Africans, especially grassroots members of the ANC, who portray him as a defender of the disadvantaged. South Africa is deep in an economic malaise, with cripplingly high levels of unemployment. Economic activity had already been badly affected by restrictions to stop the spread of coronavirus.