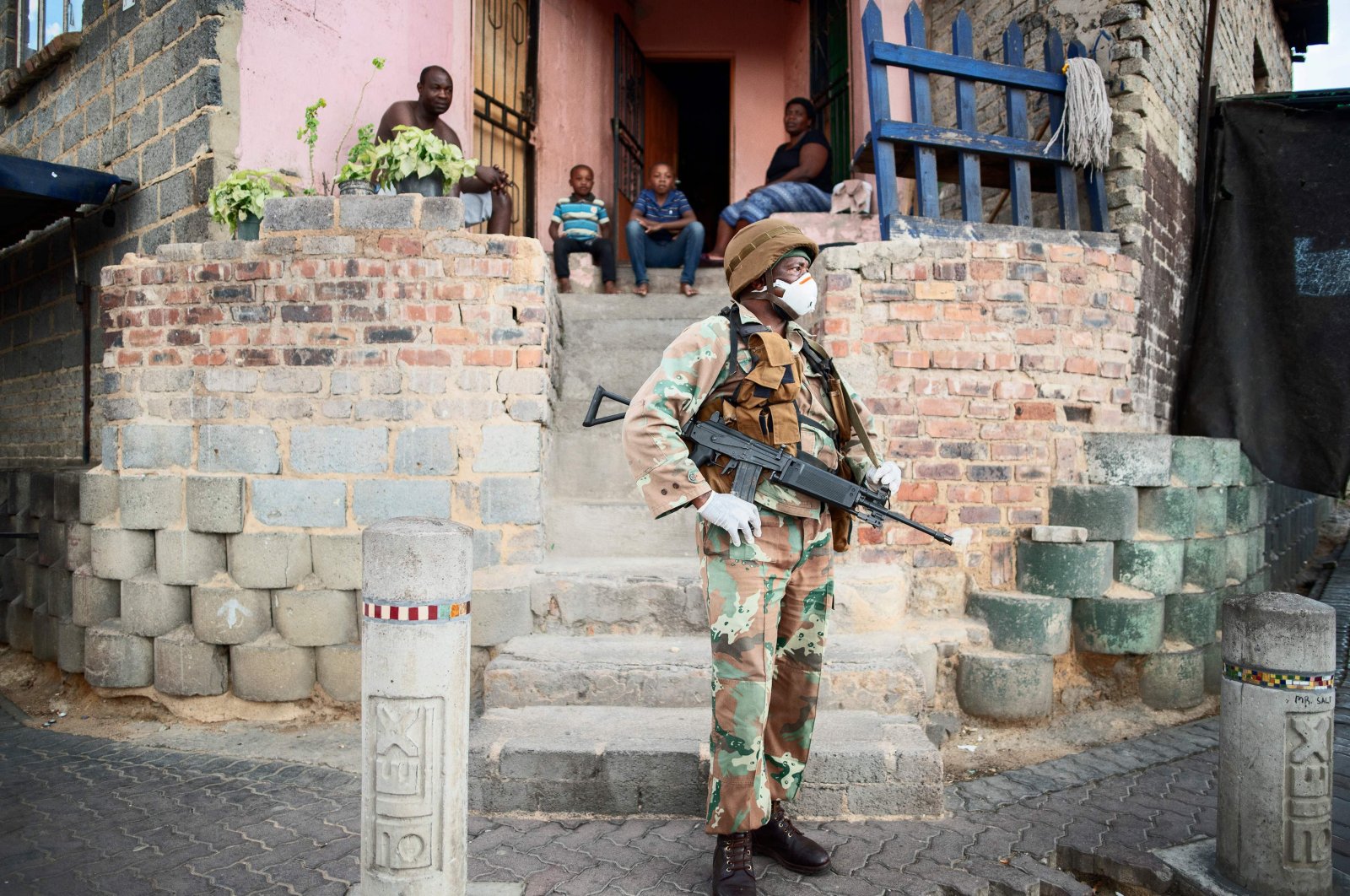 A South African National Defence Force (SANDF) soldier stands in front of a house as he patrols the streets in Alexandra, Johannesburg, on Friday, March 27, 2020 during a joint operation with the South African Police Service (SAPS) in order prevent the spread of the COVID-19 coronavirus outbreak. (AFP Photo)
by Associated Press Mar 27, 2020 8:20 pm
RECOMMENDED

South Africa announced its first deaths from the coronavirus Friday as the country's cases rose well above 1,000 and a three-week lockdown began, with military patrolling and police screaming at the homeless on quiet streets.

But some people cooly strolled through townships, alcohol in hand, or jostled in line at shops as fellow citizens looked on, worried. "Children are playing in the streets. It looks like it is the holiday season,” said Phiwe Manata, who lives in Gugulethu township outside Cape Town.

The two deaths occurred in Western Cape province, home of Cape Town. South Africa's 1,170 cases are the most in Africa, with the total across the continent now above 3,500.

Security forces with megaphones screamed at people shortly after midnight in downtown Johannesburg, the country’s commercial hub. Homeless people scattered, looking for shelter, to the astonishment of residents on balconies who filmed the patrols with their mobile phones. One baton-wielding officer took chase.

Some motorists were pursued, stopped and searched. "Go home," security forces shouted. "You cannot be outside... You are so selfish.” Around 3 a.m., sustained gunfire echoed through the streets.

South Africa’s military helped to enforce measures that include bans on sales of cigarettes and alcohol, even dog-walking. President Cyril Ramaphosa, in full military uniform, on the eve of the lockdown told troops to be a "force of kindness” and reminded police that "our people are terrified right now and we should not do anything to make their situation worse.”

Some feared the abuse of power. In Rwanda, which imposed a lockdown over the weekend, police have denied that two people shot dead on Monday were killed for defying the new measures. In Kenya on Friday, police fired tear gas at people crowding to board a ferry ahead of a curfew in Mombasa.

South Africans should go out only for essentials such as groceries or medical care or to provide essential services. Public transport operates only during rush hour.

"We are putting our lives at risk," said one commuting worker, Simphiwe Radebe, saying they had little choice. "Please pray for us." Minibus taxis were sprayed with disinfectant before passengers boarded, leaving spaces between them, some wiping their hands.

Anxiety is especially high among low-income South Africans squeezed into crowded townships with limited water supplies. Fears of an increase in domestic violence and rape have been expressed by civil society groups.

"Social distancing is very impossible here," said Sipho Moyo, a manicurist who lives in Johannesburg's Hillbrow neighborhood. "I share a room with two other people. The next room has four people, another room has a family. We all share one bathroom and a kitchen. We all try our best to maintain distance and cleanliness but it is difficult, as you can imagine.”

She watched from her window as people in long lines at local shops ran away as police sirens began to wail. "It's quiet now,” she said.

Like many informal workers, she didn't know how she will get by. Economic pain is widespread, with South Africa in recession and unemployment at 29%.

In Africa's largest city, Nigeria's Lagos, traders also worried after nonessential markets were shut down and the country's cases rose to 65. "If we do not go out, we cannot eat, our government did not make any provision for us,” Bolaji Tajudeen said.

Elsewhere in Africa, Congo announced a virus case in the eastern province of Ituri, a region that had been affected by the other current global health emergency, an Ebola virus outbreak, That outbreak is waning.

The United Nations mission in Somalia said a contractor had the virus, bringing cases in that fragile country to three. The health ministry said the person was in the international compound at the Mogadishu airport where diplomats and aid workers are based.

South Sudan's recovery from civil war became more challenging as the government suspended the training of nearly 50,000 unified forces as a precaution. The country, its health system shattered by conflict, has not recorded a virus case.

For most people, the new coronavirus causes mild or moderate symptoms, such as fever and cough that clear up in two to three weeks. For some, especially older adults and people with existing health problems, it can cause more severe illness, including pneumonia and death.

More lockdowns are expected; Eswatini on Friday barred unnecessary travel for 20 days. Twenty-four of Africa's 54 countries already have fully closed borders, according to the Africa Centers for Disease Control and Prevention.

"It is literally a matter of life and death," Botswana President Mokgweetsi Masisi said Friday, urging citizens to stay home. The country is just one of eight in Africa without a confirmed case. "Our actions will determine whether we survive this pandemic or not.”