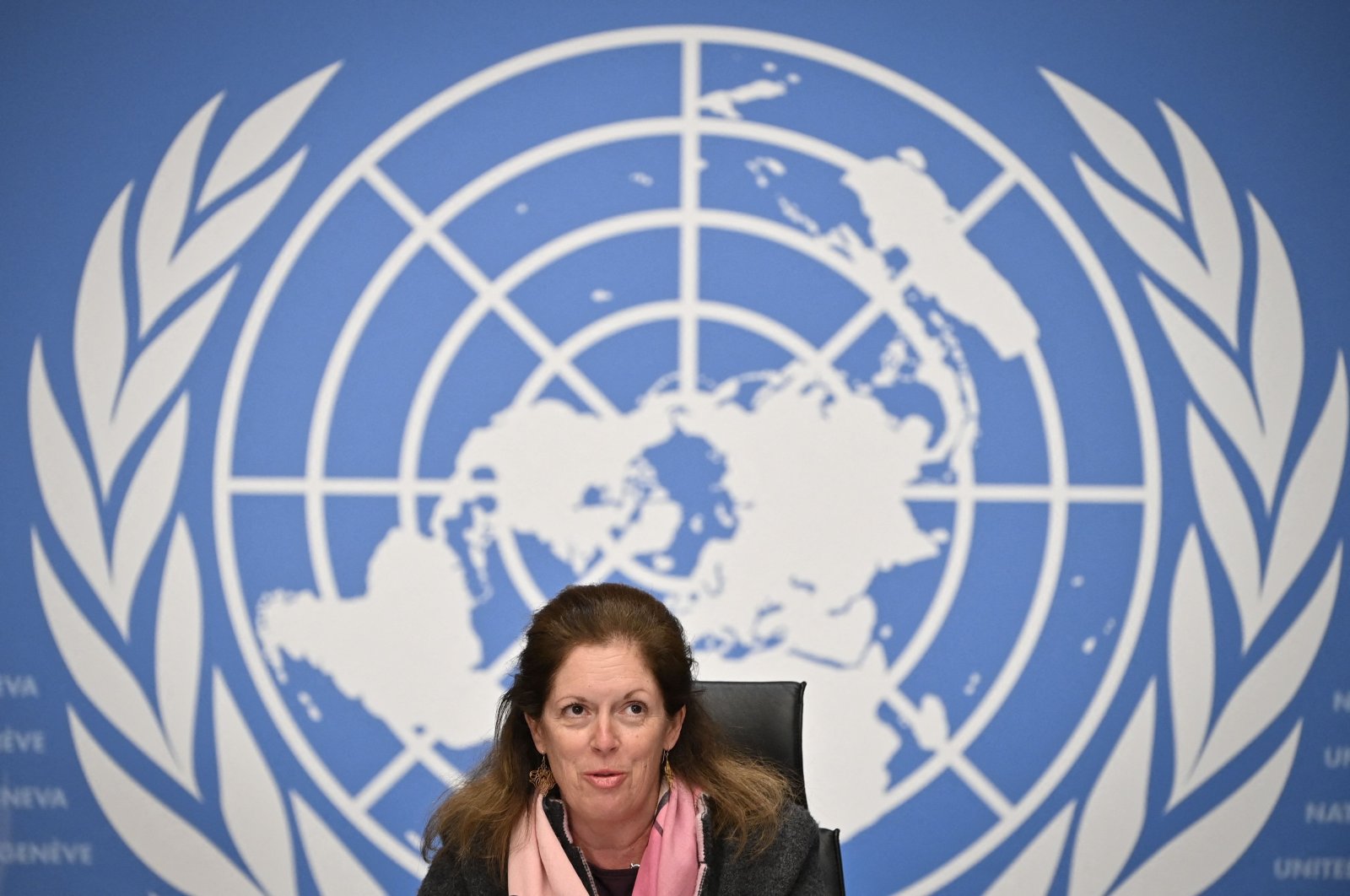 Then-deputy Special Representative of the U.N. Secretary-General for Political Affairs in Libya Stephanie Williams speaks during a press conference in Geneva following the election of a new interim government for Libya during the Libyan Political Dialogue Forum, Feb. 5, 2021. (AFP File Photo)
by DAILY SABAH WITH AGENCIES Dec 07, 2021 8:05 am
RECOMMENDED

U.S. diplomat Stephanie Williams, who led Libya reconciliation talks that led to the October 2020 cease-fire, has been appointed as the new special adviser to the U.N. chief on Libya, replacing Jan Kubis, the global body's Secretary-General Antonio Guterres announced Monday.

Her appointment as the special adviser to the U.N. chief on Libya – a new position – follows the Nov. 23 announcement that Kubis was resigning after 10 months on the job. The Geneva-based Kubis told the Security Council he was leaving to facilitate a change he considers vital: moving the mission chief’s job to Libya's capital, Tripoli, to be on the ground at a high-stakes moment for the country.

Libya is set to hold the first round of presidential elections on Dec. 24, after years of U.N.-led attempts to usher in a more democratic future and end the country’s civil war.

The country plunged into turmoil after a NATO-backed uprising in 2011 toppled dictator Moammar Gadhafi, who was later killed. It then became divided between rival governments – one in the capital Tripoli backed by the U.N., and one in the east led by putchist Gen. Khalifa Haftar.

In April 2019, Haftar and his forces, backed by Egypt and the United Arab Emirates, launched an offensive to try and capture Tripoli. His campaign collapsed after Turkey stepped up its military support of the U.N.-supported government with hundreds of troops.

The October 2020 cease-fire agreement led to an agreement on a transitional government in early February 2021 and elections scheduled for Dec. 24. Both agreements were overseen by Williams.

U.N. spokesperson Stephane Dujarric, who announced her appointment, said: “Ms. Williams did a spectacular job when she was in office, and we are delighted that she accepted the offer to return.”

He said she will return to Tripoli as special adviser “and will start in the coming days,” which “ensures that we will have the leadership in place during this very critical month of December.”

As head of the U.N. mission in Libya known as UNSMIL, Dujarric said Williams will also pursue implementation of the intra-Libyan dialogue on political, security and economic issues. But it is the Dec. 24 election that all eyes are focused on.

The vote faces many challenges, including disputes over the laws governing the elections and occasional infighting among armed groups. Other obstacles include the deep rift that remains between the country’s east and west, and the presence of thousands of foreign fighters and troops despite the October 2020 cease-fire agreement’s stipulation that they depart in three months.

In September, Kubis told the council: “Holding the elections in Libya, even in a less-than-ideal situation, and with all imperfections, challenges and risks, is much more desirable than no elections. That could only foster division, instability and conflict.”

The announcement that Williams will be returning to Tripoli follows last Thursday’s ruling by a court in Libya’s southern province of Sabha that Gadhafi’s son and onetime heir apparent, Seif al-Islam Gadhafi, can compete in the presidential election. The Sabha court overturned a decision by the country’s top electoral body disqualifying him, citing his past convictions.

Seif al-Islam had been sentenced to death by a Tripoli court in 2015 for using violence against protesters in the 2011 uprising against his father, though that ruling has since been called into question by Libya’s rival authorities. He is also wanted by the International Criminal Court on charges of crimes against humanity related to the uprising. However, many Libyans, including the armed groups that hold the balance of power across swathes of the country, view his presence on the ballot as unacceptable after the bloody struggle to oust his father.

Other candidates hoping to be president include putschist Gen. Haftar, influential former interior minister Fathi Bashagha and interim Prime Minister Abdul Hamid Dbeibah, who filed a request to run despite rules barring him from doing so.

On Monday, 70 lawmakers called for holding a parliamentary session on Monday "to question Emad al-Sayeh, the head of the elections commission, and representatives of the judicial authorities supervising the polls."

The move came after the Court of First Instance in the western city of al-Zawiya last Tuesday ordered the exclusion of putschist Gen. Khalifa Haftar from the Dec. 24 presidential polls.

An Anadolu Agency (AA) analysis of the 70 lawmakers' statement found that most of them are supporters of Haftar.

Tuesday's court ruling against Haftar is not final, and the warlord can still issue a challenge at a court of appeals.

Last Wednesday, Niger’s U.N. Ambassador Abdou Abarry, the current Security Council president, said “conditions for free, credible, democratic, consensual elections have not for the moment been met. The situation is not mature enough to allow this type of election.”