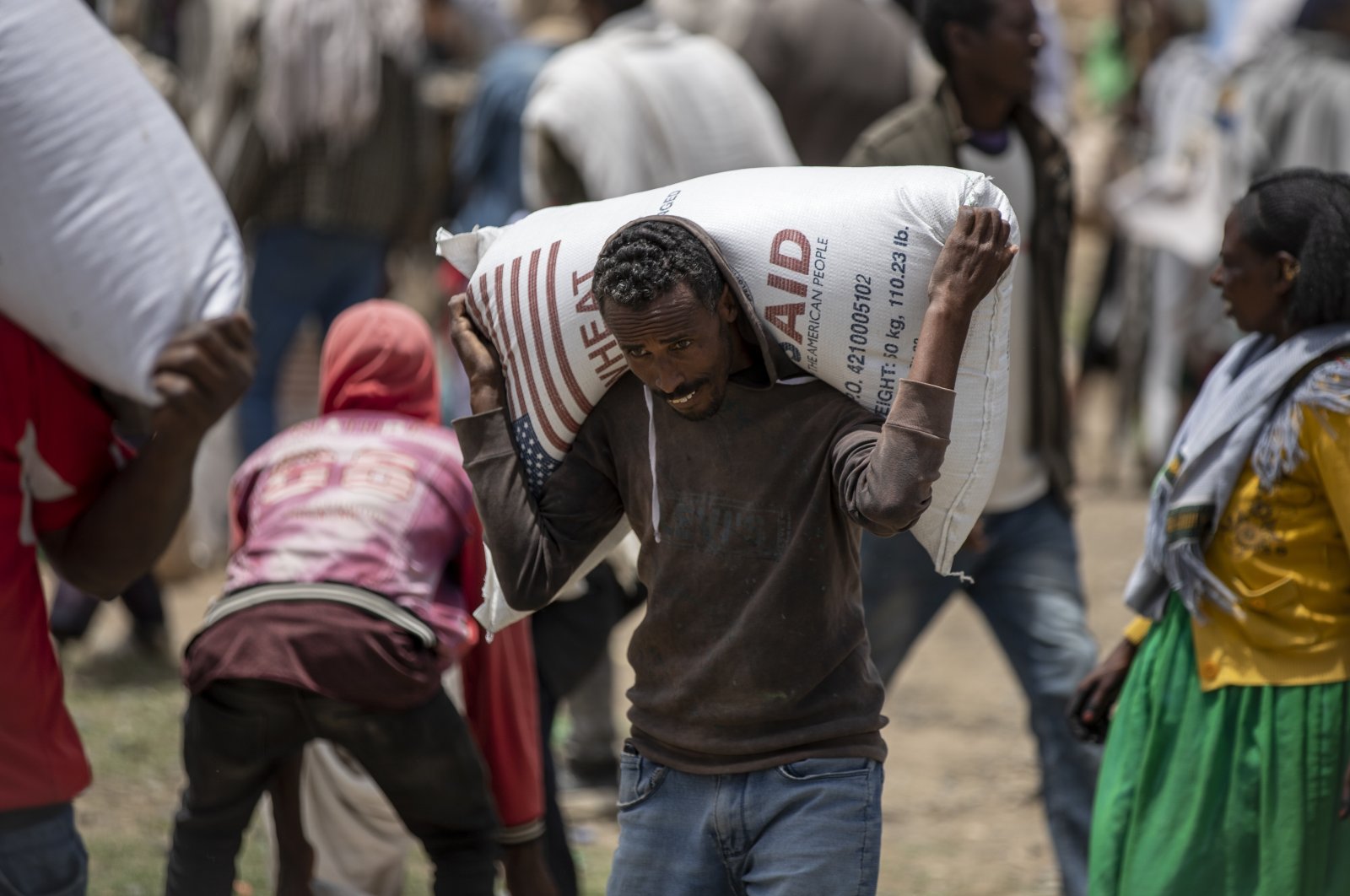 An Ethiopian man carries a sack of wheat on his shoulders to be distributed by the Relief Society of Tigray in the town of Agula, Tigray region, northern Ethiopia, May 8, 2021. (AP Photo)
by ASSOCIATED PRESS Jun 17, 2021 3:26 pm
RECOMMENDED

A new commission of inquiry into the Tigray region by an African Union body needs to "immediately cease," Ethiopia's government said. The Tigray region has been locked in a deadly conflict, leading to warnings of famine and "ethnic cleansing."

An Ethiopian foreign ministry statement on Thursday criticized the independent inquiry as "misguided” and lacking legal basis and proposed a joint probe instead.

But members of the new commission, created under the African Commission on Human and Peoples’ Rights, said they had not received that statement from Ethiopia. The investigation into alleged human rights abuses will go forward, they said.

"What we have started cannot be stopped,” the commission’s vice-chair, Remy Ngoy Lumbu, told reporters Thursday. He added that Ethiopia has given authorization for the commission to visit Tigray but no date has been set, with the security situation a factor.

Any findings "definitely will not be hidden in the drawer,” Lumbu said. It is not clear when the commission’s report will be published.

Thousands of civilians have been killed in Tigray since the conflict began in November between Ethiopian forces, backed by ones from neighboring Eritrea, and fighters supporting the region's now-fugitive leaders. Witnesses have described to The Associated Press (AP) gang-rapes, mass expulsions and forced starvation, leading the United States and others to warn of famine.

The U.S. also has reported alleged ethnic cleansing in parts of Tigray. The term refers to forcing a population from a region through expulsions and other violence, often including killings and rapes.

Ethiopia's government has rejected the allegations and asserted that it is helping Tigray to rebuild.

The United Nations human rights office is also looking into the Tigray conflict, but it is a joint investigation with the Ethiopian Human Rights Commission, which has led to concerns about independence.

While Ethiopia seeks a joint investigation with the AU commission of inquiry as well, commissioner Maya Sahli-Fadel said a probe conducted with the government would "alter and dilute the independence of the commission." Even if the commission cannot enter Tigray, she said, it can visit neighboring countries and speak to refugees among the scores of thousands who have fled.

The AU and U.N. investigations will complement each other, Lumbu said.

The commission started work on Thursday and will sit for at least three months, and that period can be renewed.