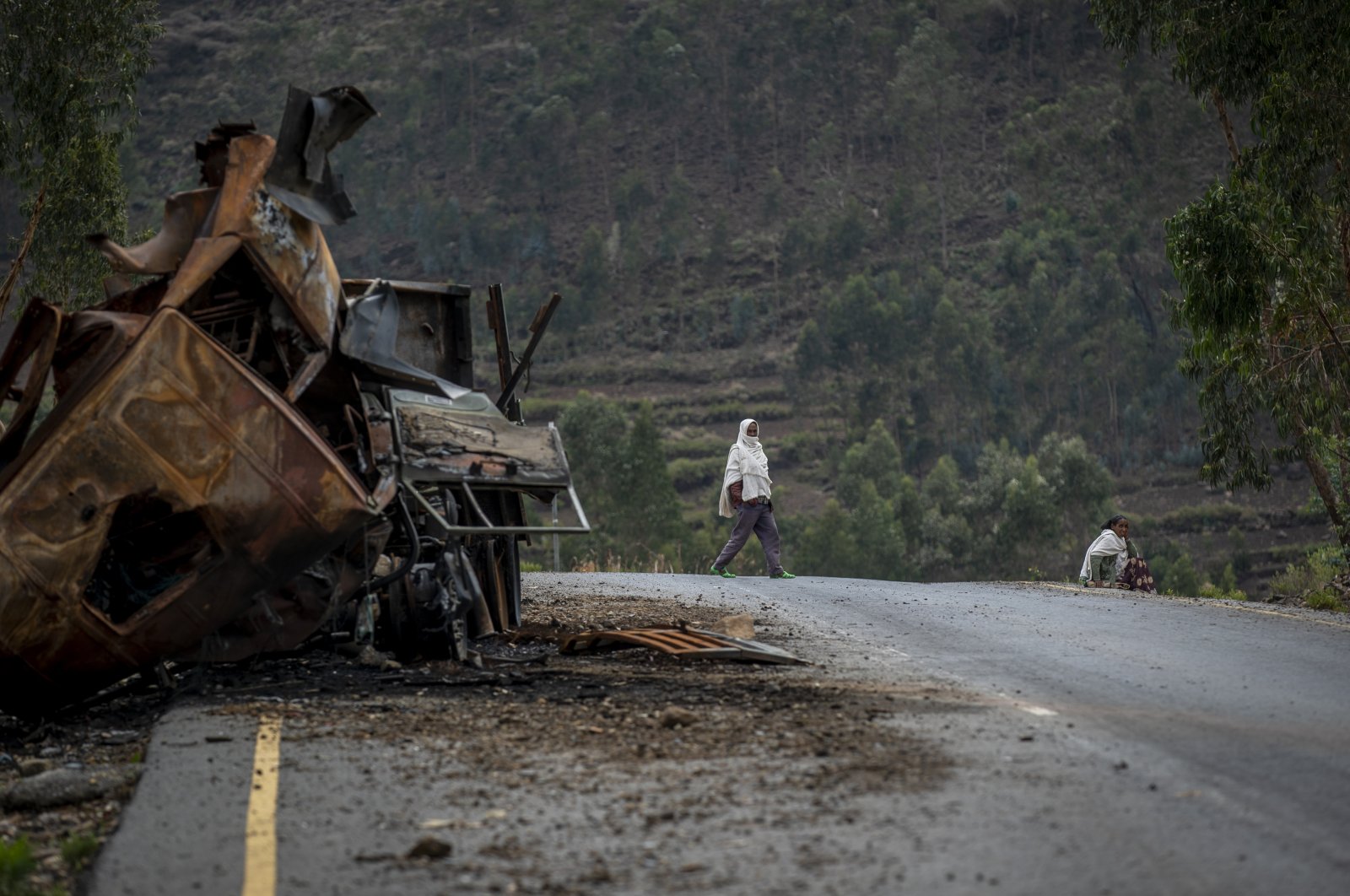 Eritrean troops fighting with Ethiopian forces in a war against the Tigray region’s fugitive leaders "will definitely leave soon,” Ethiopia’s U.N. ambassador said Tuesday in a move that would be welcomed by many including the United Nations, whose humanitarian chief accused the Eritreans of using starvation as "a weapon of war.”

The war in Tigray was the subject of an informal closed meeting of the U.N. Security Council where aid chief Mark Lowcock warned that over 350,000 people were in famine conditions, with deaths from starvation already reported and Ethiopia’s U.N. envoy Taye Atske Selassie Amde disputed the famine-related data but said there is "food insecurity” in Tigray and expressed gratitude for donor help.

Lowcock strongly defended the data released last week showing that 350,000 people are facing famine and over 2 million are just a step away. It was released by The Integrated Food Security Phase Classification, known as the IPC, which is a global partnership of 15 U.N. agencies and international humanitarian organizations, and uses five categories of food security ranging from people who have enough to eat to those facing "Famine-Humanitarian Catastrophe.”

In his briefing to the Security Council obtained by The Associated Press, Lowcock called the IPC "the world’s most sophisticated, authoritative, comprehensive, professionally rigorous assessment” and said if it was wrong, "it is because it is too optimistic.”

"The Tigray administration have reported deaths from starvation,” he said. "The situation is set to get worse in the coming months, not only in Tigray, but in (neighboring) Afar and Amhara as well.”

Lowcock said the more than 350,000 people in famine "catastrophe” conditions is a larger number than the world has seen anywhere in the world since 250,000 Somalis lost their lives to famine in 2011.

The largely agricultural Tigray region of about 5.5 million people already had a food security problem amid a locust outbreak when Prime Minister Abiy Ahmed on Nov. 4 announced fighting between his forces and those of the defiant regional government. Tigray leaders dominated Ethiopia for almost three decades but were sidelined after Abiy introduced reforms that won him the Nobel Peace Prize in 2019.

No one knows how many thousands of civilians or combatants have been killed. More than 50,000 have fled into neighboring Sudan. Though Abiy declared victory in late November, Ethiopia’s military and allied fighters remain active including troops from neighboring Eritrea, a bitter enemy of the now-fugitive officials who once led Tigray.

In addition to Eritrean soldiers using starvation as "a weapon of war,” Lowcock told the Security Council that "rape is being used systematically to terrorize women and girls. ... Displaced people are being rounded up, beaten and threatened. Aid workers have been killed, interrogated, beaten, blocked from taking aid to the starving and suffering and told not to come back.”

He warned that without an end to the war and a political solution in Tigray, protection of civilians, and the departure of Eritrean soldiers who are responsible for "substantial violations” of international humanitarian law, "no one should be surprised to see a re-run of 1984.”

In the disastrous famine of 1984-85, about 2 million Africans died of starvation or famine-related ailments, about half of them in Ethiopia.

Asked when they would leave, Ethiopia's Amde told reporters after the council meeting that "there is a commitment from my government, and the Eritreans are very clear as well, that it is a matter of sorting out some technical and procedural issues. Our expectation is they will definitely leave soon.”

Britain’s U.N. Ambassador Barbara Woodward said, "there can be no further delay.”

"Farmers have been unable to plant next year’s crops due to the violence,” she told reporters. "The window for them to do so is about to close. And while the violence continues, it is not only condemning the people of Tigray to desperate hunger this year, but next year, too.”

Woodward stressed that the lives of millions of people hang in the balance. "The solution is clear: a cease-fire, humanitarian access and political dialogue,” she said.

Woodward said the United Kingdom has announced a further 16.7 million pounds ($23.4 million) in aid for Ethiopia, bringing the total to 47.7 million pounds ($66.8 million) since the conflict began eight months ago. Ambassador Amde singled out the contributions from the UK and China.

Lowcock said the United States "is the only donor who has stepped up in any sort of meaningful way so far.” He stressed that funding is needed now "to prevent the famine from getting worse.”

The three African members of the Security Council – Tunisia, Niger, Kenya joined by Saint Vincent and the Grenadines – issued a statement late Tuesday expressing "concern for the humanitarian needs faced by 17.1 million Ethiopians including people in the Tigray region” and called for stepped-up aid.

The 14 point statement never mentions famine and warns the council that any action it takes "must recognize and respond to the reality that Ethiopia is finalizing preparations for an election that is barely a week away."