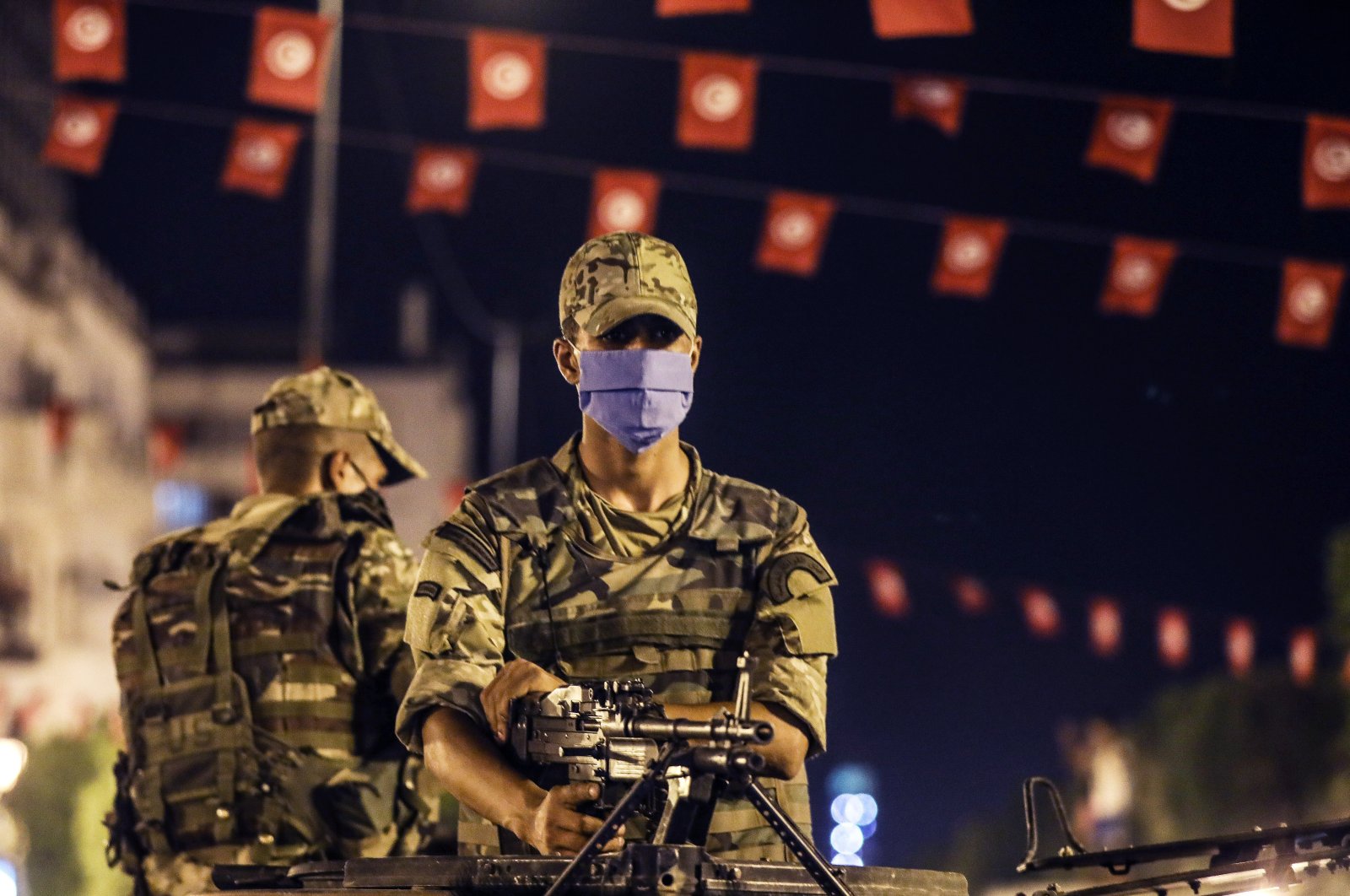 Soldiers stand by as supporters of Tunisia's President Kais Saied gather on the streets after he dismissed the government and froze parliament, in Tunis, Tunisia, July 25, 2021. (EPA-EFE Photo)
by DAILY SABAH WITH AGENCIES
Jul 30, 2021 10:23 am

Tunisia's Parliament Speaker Rached Ghannouchi, in an interview with Agence France-Presse (AFP), has called for a return to democracy after President Kais Saied's shocking power grab on the weekend, suspending the parliament and firing Prime Minister Hichem Mechichi.

Ghannouchi, also the leader of one of the leading parties in parliament, Ennahdha, voiced regret about the lack of dialogue with the presidency, and warned that if no agreement is reached on the formation of a government and the reopening of the legislature, "we will invite the Tunisian people to defend their democracy."

"There is no dialogue today with the president nor with his advisers. But we think we need a national dialogue," Ghannouchi said, "We are trying to use all peaceful means – dialogue, negotiations, street pressure, pressure from organizations ... internal and external pressure – to bring back democracy."

Asked if he would be ready to negotiate with the president after he was accused of staging the coup, Ghannouchi asserted that he and his party are ready to "make all concessions so that democracy can return to Tunisia."

"The Tunisian constitution is more important than our staying in power. We are always ready for all concessions in the context of a return to democracy, and not the imposition of dictatorship and a coup d'etat."

"That's an error in which we all bear a part of the responsibility," Ghannouchi said.

"Since the start, we have called on the people to fight the coup d'etat with all peaceful means, and this resistance will continue with peaceful means," he added. "If there is no agreement on the return of parliament, on the formation of a government and its presentation to parliament, the Tunisian street will undoubtedly mobilize, and we will invite the Tunisian people to defend their democracy."

As the birthplace of the Arab Spring, Tunisia was considered the only example of democratic success in the Arab protest wave of 2011, when the administration handed over its achievements in the field of fundamental rights and freedoms through elections to its successors.

But Tunisia has not been able to achieve political stability and, therefore, economic stability during the turbulent transition it entered after the Arab Spring. More than 10 governments have taken office in the country in the last 10 years. The revolution failed to meet its promises, such as employment opportunities, and the economic situation for ordinary Tunisians became more complicated every day due to the global storm caused by the coronavirus pandemic.

During Republic Day on July 25, there were mass protests in Tunisia against the political atmosphere throughout the country, and attacks were carried out on the headquarters of some political parties.

Saied said he would use "extraordinary constitutional powers" to "prevent the country from being dragged into civil war" after meeting with the security bureaucracy and military commanders earlier in the evening. He announced that he had dismissed the prime minister, suspended parliament for 30 days and would appoint a new prime minister and assume executive authority.

Ghannouchi, who was accompanied by deputies, was barred from entering parliament by the country’s military. He called on the people to peacefully protest Saied’s decisions and labeled them a "coup," which has no legal basis.

In the following days, Saied ousted defense and justice ministers from their post and sacked several top officials, including the army’s chief prosecutor. On Wednesday, the CEO of national television channel Wataniya found himself kicked out of office.

In addition, Saied has lifted parliamentary immunity from legislators and taken judicial powers into his hands. He also ordered an investigation into the three largest political parties in parliament, including Ennahdha. The probe claimed that all three parties received foreign funds ahead of the 2019 elections.

Four days after the coup, Saied accused 460 businesspeople of embezzlement. He slammed the "bad economic choices" made in recent years during a meeting with a leader of the employers' federation UTICA. In his comments late Wednesday, the president singled out for criticism "those who plunder public money."

Saied is a former professor of constitutional law and was among a delegation of experts studying the Tunisian constitution, which was adopted in 2014 following the Arab Spring. He entered the race as an independent candidate in the 2019 presidential election and managed to qualify for the runoff. In 2019, with his unusual campaign benefiting from that time's popular "revolution" theme, he won a landslide victory in the second round of popular elections.

Attracting the attention of the international press with his strong rhetoric, in which he dominantly used classical Arabic language, Saied stood out in the country's political structure with his defense of a system created by individuals rather than political parties.

How did Tunisia come to this point?

The Ennahdha Movement won the parliamentary elections held simultaneously with the presidential election in 2019. It took the first position with 52 lawmakers in the 217-seat parliament but failed to gain a majority that could form the government alone.

Tunisia has experienced many episodes of political wrangling within parliament since 2019.

The technocrat cabinet of Prime Minister Mechichi, appointed by Saied in July 2020 as the third prime minister in the last two years, took office in parliament with the support of parties such as Ennahdha and the Heart of Tunisia party.

However, the rift between Saied and Mechichi has become open to public opinion. Saied argued in February that Mechichi’s cabinet overhaul was not constitutional. Despite this, parliament gave the cabinet a vote of confidence. While tensions have occasionally escalated between the two with mutual statements, the fact that political actors have played a role in this decoupling has deepened the crisis.

The fact that the constitutional court, set out by the 2014 constitution with the power to finally resolve the issue, has not yet been established has also made the crisis even more unresolved.

As this disintegration within the state and politics deepened, Tunisia continued to grapple with crises made difficult by the severe economic and health conditions caused by the COVID-19 outbreak.

The U.K.-based Middle East Eye website published a plan in May that Saied’s advisers could use Article 80 of the Tunisian constitution in extraordinary circumstances to extend the powers of the president, and in that way, he could seize the power of the government. He rejected the claims, saying, "Tunisia has left behind the era of coups," according to Anadolu Agency (AA).

There were various reactions within the country to the president's announcements on suspending parliament and dismissing the prime minister. Some Tunisians celebrated the president's decisions with fireworks, while others protested on the grounds that it was an attempted coup.

On Monday, supporters and opponents of the resolutions faced off in front of parliament. Security forces took heavy measures. There were occasional skirmishes between demonstrators and security forces, who were trying to prevent a possible confrontation between the two sides decisively.

Reactions at different levels have been raised from political parties in parliament, including the Ennahdha Movement, as the largest party, and the Heart of Tunisia party as the second largest. Some of the parties said the president had violated the constitution and overused his powers with this step, while Ennahdha and the Dignity Coalition accused Saied of attempting a coup.

In contrast, the People’s Movement, which also supported Saied after the election process, the Popular Front, and finally the pro-old regime Free Constitution Party announced their support for his steps.

Most countries in the region and Western democracies have meanwhile adopted a "wait and see" approach.

U.S. Secretary of State Antony Blinken declined to take a firm stance on the events during a meeting with Saied. In a statement, Blinken called on the Tunisian president to adhere to democracy and human rights principles and continue dialogue with all political actors and the Tunisia people and said the U.S. would continue to monitor the situation closely.

The European Union has called on all actors in Tunisia to respect the country's constitution and refrain from violence. Germany and France avoided describing the developments as a "coup attempt," calling for the rule of law and abstention from violence.

The Gulf monarchies, known for their interventions in post-Arab Spring administrations, have largely chosen to remain silent. Bahrain "wants Tunisia to develop for greater stability and prosperity," while Qatar, known for its foreign policy outside its neighbors in the Gulf, called for calm on all sides.