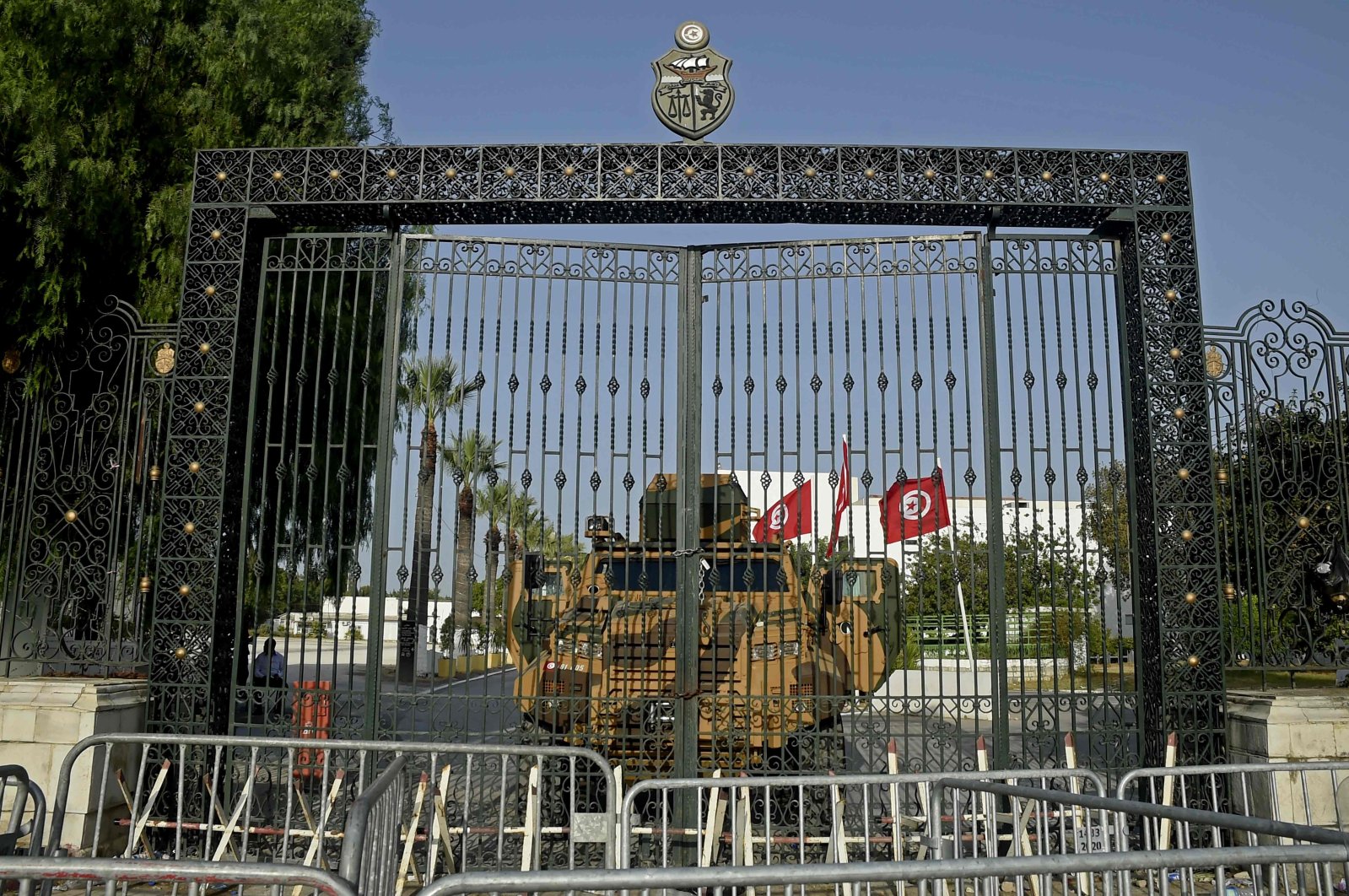 The Tunisian army barricades the parliament building in the capital after the president dismissed the prime minister and ordered parliament closed for 30 days, Tunis, Tunisia, July 26, 2021. (AFP Photo)
by Daily Sabah with Reuters Jul 28, 2021 2:42 pm
RECOMMENDED

Tunisia's judiciary said on Wednesday it was investigating the two biggest parties in parliament, which have both accused the president of launching a coup after he cited emergency powers on Sunday to seize governing control and freeze the legislative body.

The judiciary claims that the investigation started 10 days before the president's moves, but it will add to the pressure on the parties – Ennahdha and Heart of Tunisia. The parties were not immediately available for comment on the probe.

A decade after it ended autocratic rule through a 2011 revolution that prompted the Arab Spring, Tunisia faces the sternest test yet to its democratic system.

President Kais Saied has not yet appointed a new prime minister or spelled out how he will handle the situation during the 30-day period that he has frozen parliament. Ennahdha, which on Sunday had called for supporters to come out on the streets against Saied's actions, has since called for calm and sought national dialogue to get through the crisis.

There was little sign of political tensions across the country on Wednesday, with no protests or other disturbances, though a heavier security presence was in place in central Tunis. The army remains at the parliament, government and television station buildings it surrounded on Sunday.

Saied, who has reiterated a long-standing rule banning gatherings of more than three people in public streets, has also tightened some existing COVID-19 restrictions including a nightly curfew and ban on travel between cities.

The president's decision was widely denounced across the world, with European leaders calling on Saied to respect the constitution. Western governments have conveyed to Saied that they are closely watching his adherence to maintaining the rule of law, including freedom of the press and judicial independence.

Late on Tuesday, Tunisia's foreign minister spoke to his Turkish, French, Italian, German and EU counterparts, and to the U.N. High Commissioner for Human Rights to reassure them that Saied's actions were temporary, the ministry said. Turkey has strongly opposed the coup and said it is "deeply concerned" about the suspension of Tunisia's parliament, which represents the "will of the people."

“Protecting the democratic gains and the unique position of Tunisia, which is an exemplary success story in terms of the democratic process in line with the expectations of the region’s people, is not only vital for Tunisia, but also for the region,” the Turkish Foreign Ministry said in a written statement. “Within this scope, we wish that democratic legitimacy is reestablished within the framework of the decrees of the Tunisian constitution as soon as possible.”

It noted that Turkey believes the Tunisian people will overcome this challenge and pledged support.

"Turkey has no doubt that the Tunisian people, who have successfully navigated many challenges on the path to democracy, will also overcome the current test."

The suspending of the chosen parliament in Tunisia and the ousting of the government is a coup against political legitimacy, Turkey's ruling Justice and Development Party (AK Party) Spokesperson Ömer Çelik stated Monday.