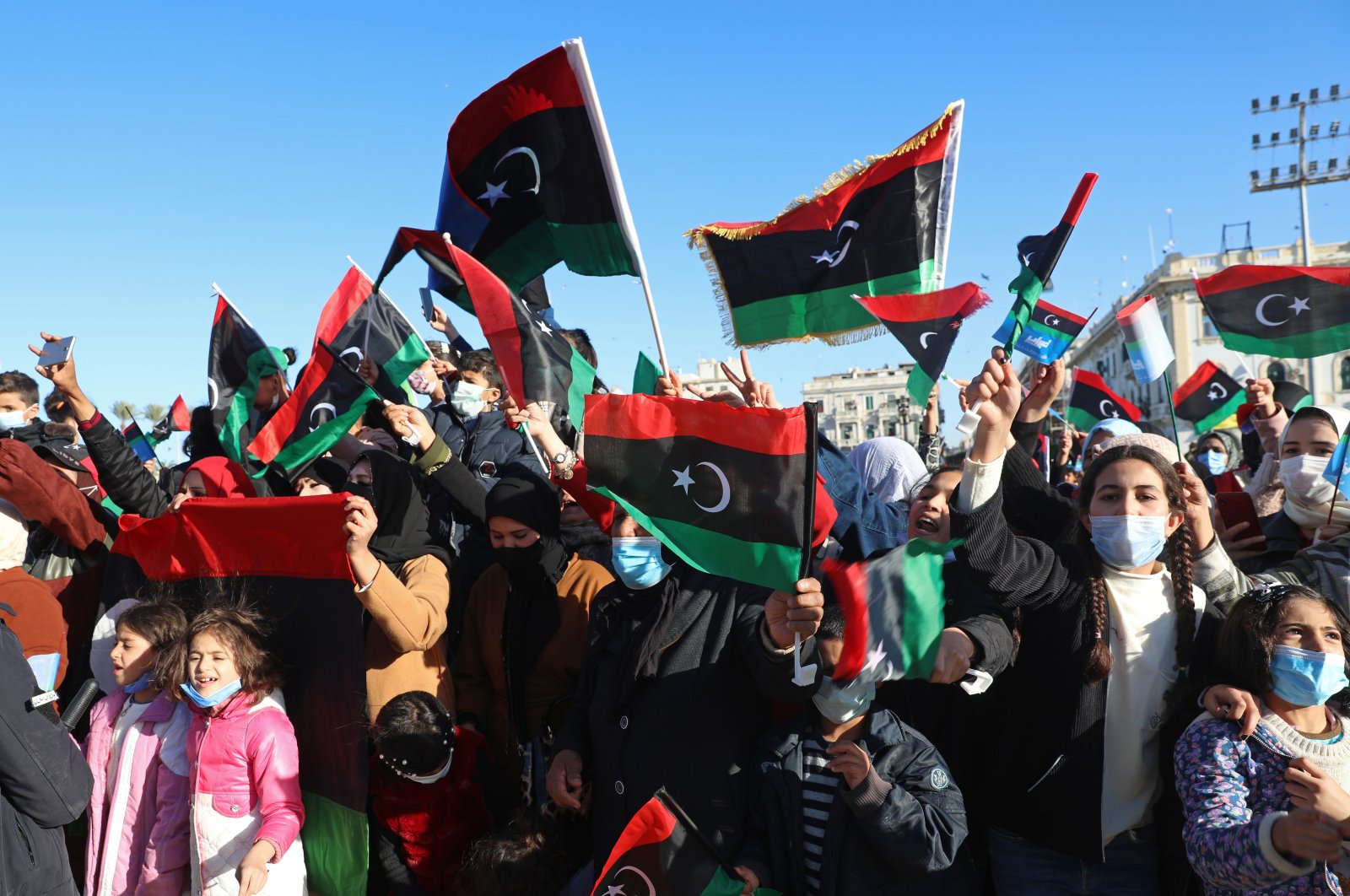 Libyans mark the 10th anniversary of their 2011 uprising that led to the overthrow and killing of longtime ruler Moammar Gadhafi, in Martyrs Square, Tripoli, Libya, Feb. 17, 2021. (AP File Photo)
by Agencies Sep 13, 2021 9:09 am
RECOMMENDED

The French, German, United States, Italian and British Embassies in Libya urged all actors in Libya to ensure inclusive, free and fair elections are held on Dec. 24, as they pledged to provide assistance in this regard.

The embassies joined the call of the United Nations Secretary-General’s special envoy for Libya, Jan Kubis, who in his briefing to the U.N. Security Council (UNSC) Sept. 10 said the failure to hold scheduled elections in Libya could renew conflict in the country and harm efforts to unite the nation after a decade of turmoil.

“Such elections, as determined in the Roadmap of the Libyan Political Dialogue Forum (LPDF) in Tunis in November 2020 and asserted in UNSC Resolution 2570, are an essential step in further stabilizing and uniting Libya, and their results should be respected by all,” the joint statement said.

The statement also highlighted that all actors should recognize that “now is the time to engage and finalize” the electoral framework, taking into account all legitimate concerns of the Libyan people.

“We stand ready to support, at their request, the interim Libyan authorities in the organization of the elections, including through raising awareness among voters and educating the public regarding the fight against disinformation during the electoral campaign. We remain committed, also, to women’s full, equal and meaningful participation in Libyan elections, as voters, candidates and decision-makers in the political process,” it said.

It also commended the Libyan parties for their readiness “to turn the page,” put behind them past conflicts and take serious steps toward the unification of Libyan institutions and ending the political transition.

“We call for the full compliance of all actors with UNSC sanctions, including through national implementation measures against those who are found to be in breach of the UNSC arms embargo or the cease-fire, threaten the peace, stability or security of Libya or obstruct or undermine the successful completion of its political transition, including those undermining elections planned for in the LPDF Roadmap,” it concluded.

Libyan Parliament Speaker Aguila Saleh has ratified a law governing the country's upcoming presidential election, sparking criticism from lawmakers and politicians who say he failed to follow due process.

Spokesperson for the eastern-based parliament, Abdallah Bliheq, Thursday posted on Facebook the text of 75 articles signed by Saleh covering the presidential electoral process.

The long-awaited move sparked condemnation among the High Council of State (HCS) and a group of 22 lawmakers who criticized Saleh for not submitting the text to a parliamentary vote.

The HCS, the equivalent of Libya's senate based in Tripoli, decried Saleh's "unilateral" decision.

It accused him of trying to "grab powers he does not have" in order to "hamper the upcoming elections by deliberately promulgating a flawed piece of legislation."

The deputies said in a statement that ratifying the law without a vote violates parliament's internal rules.

Critics accuse Saleh of trying to favor putschist General Khalifa Haftar, a likely candidate for the presidency who controls the country's eastern province and part of the south.

The U.N. envoy for Libya Jan Kubis told the UNSC Friday that Saleh informed him "the presidential electoral law was already adopted."

Saleh said that "the parliamentary elections can be organized on the basis of the existing law with possible amendments that could be considered and approved within the coming two weeks," Kubis added.

"Holding the elections in Libya, even in less than ideal situation, and with all imperfections, challenges and risks is much more desirable than no elections that could only foster division, instability and conflict," Kubis said.

The law regulating the legislative elections, also planned for Dec. 24, still needs to be debated and voted in parliament before it is ratified.

U.N.-sponsored peace talks brought about a cease-fire last October between the putschist Gen. Khalifa Haftar in Libya’s east and the U.N.-backed Government of National Accord (GNA) in the west and installed an interim government that is expected to lead the country into December elections; however, the Libyan parliament has failed to finalize a legal framework for voting to take place.

But despite months of relative peace, Libyans remain at odds over when the elections should be held, which elections and on what legal basis.