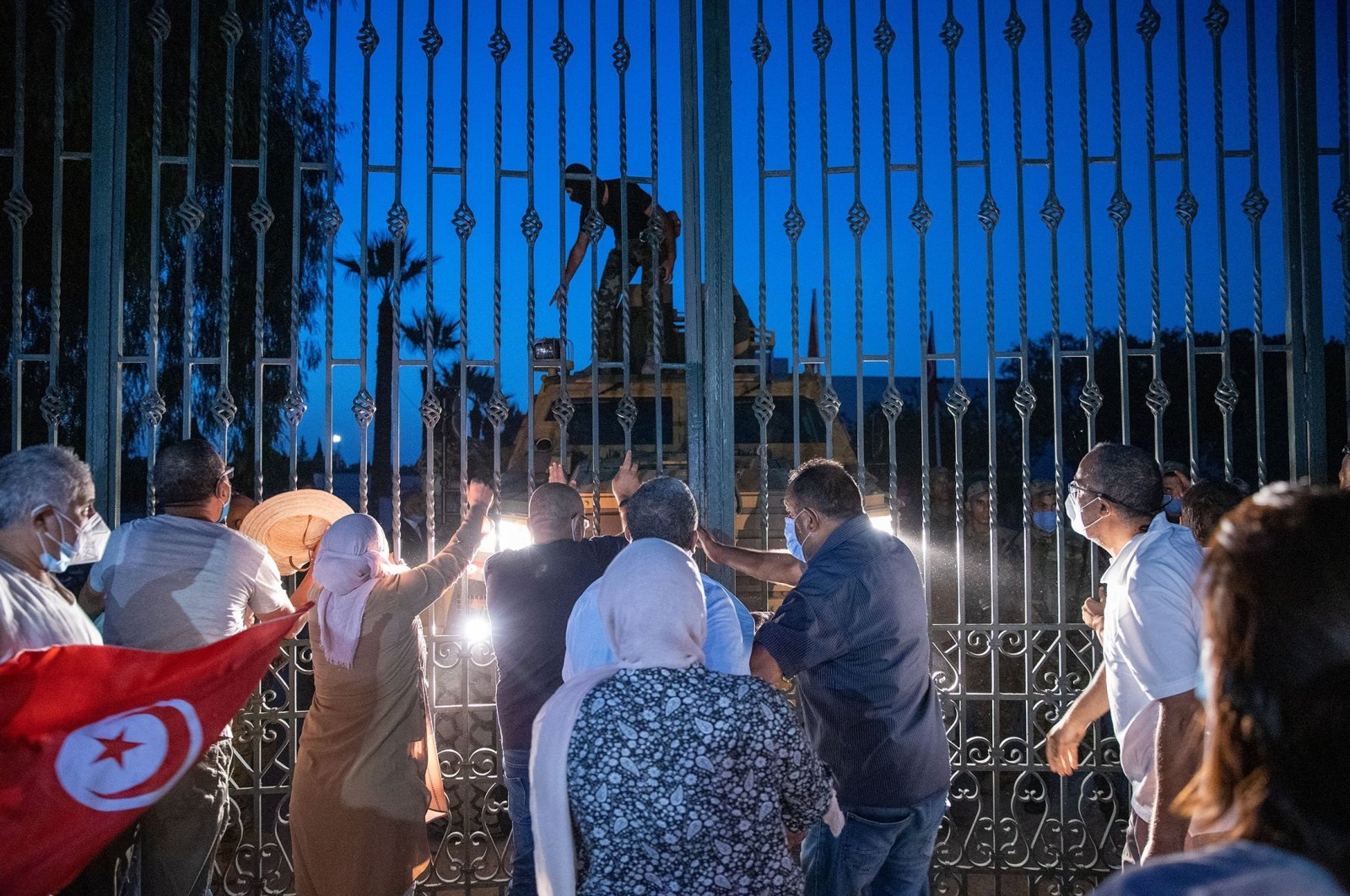 Supporters of the Ennahdha party stand at the gates of the parliament, protesting the drastic political move as a coup, July 26, 2021. (AA Photo)
by DAILY SABAH WITH AGENCIES Jul 26, 2021 11:38 am
RECOMMENDED

Messages denouncing President Kais Saied's Sunday decision to suspend Tunisian parliament and dismiss the country's Prime Minister Hichem Mechichi poured in from all corners of the world, with prominent organizations and political leaders condemning the move.

The International Union for Muslim Scholars (IUMS) rejected any "coup” in Tunisia, warning the Tunisian people to be wary of putschists' traps. "We are against any coup even if it is carried out by an Islamic group. Our legitimate position is clear," IUMS Secretary-General Ali al-Qaradaghi said in a Twitter post following the announcement by Saied late Sunday that he has fully assumed executive authority.

"Tunisia and its great people are too big and conscious to be swallowed up by the putschists and their supporters," al-Qaradaghi said. The Heart of Tunisia party on Monday denounced the dismissal of the Tunisian government and suspension of parliament as a "grave breach” of the constitution.

"The decisions taken by President Saied are a grave breach of the constitution,” the party’s parliamentary bloc said in a statement. The party, which has 29 seats in the 217-member parliament, warned that Saied’s moves risk dragging Tunisia to the era of "one-man rule."

The party reiterated its commitment to the rule of law and institutions, adding that it "respects electoral legitimacy and rejects any decision that contradicts its institutional outcomes." It went on to call on all parties to address the "legitimate demands” of Tunisians and avoid "false political battles."

The party called on the parliament to convene immediately and the prime minister "to assume his legitimate duties and to avoid creating a vacuum,” while urging the country’s security apparatus to "protect the state and its institutions, the values and principles of the republic, and ensure the security of the people."

Yemeni Nobel Peace Prize laureate Tawakkol Karman accused Saied of betraying his voters, labeling his decision to dismiss the government as a "counter-revolution.”

Saied said Sunday he has decided to suspend the immunity of all members of parliament and take control of the general prosecutor’s office. The Tunisian president claimed that his decisions were taken after consulting Mechichi and Parliament Speaker Rached Ghannouchi.

Ghannouchi, for his part, described Saied's moves as nothing but a "full-fledged coup" against the Tunisian Constitution, revolution, and freedoms in the country.

According to Anadolu Agency (AA), Saied has assigned Khaled Yahyaoui, the director-general of the presidential security unit, to supervise the Interior Ministry after dismissing the government on Sunday, two security sources said.

Turkey said it is "deeply concerned" about the suspension of Tunisia's parliament, which represents the "will of the people."

“Protecting the democratic gains and the unique position of Tunisia, which is an exemplary success story in terms of the democratic process in line with the expectations of the region’s people, is not only vital for Tunisia, but also for the region,” the Foreign Ministry said in a written statement. “Within this scope, we wish that democratic legitimacy is reestablished within the framework of the decrees of the Tunisian constitution as soon as possible.”

It noted that Turkey believes the Tunisian people will overcome this challenge and pledged support.

"Turkey has no doubt that Tunisian people, who have successfully navigated many challenges on path to democracy, will also overcome current test."

The suspending of the chosen parliament in Tunisia and the ousting of the government is a coup against political legitimacy, ruling Justice and Development Party (AK Party) Spokesperson Ömer Çelik stated Monday.

“This illegitimate initiative by the Tunisian president, has no constitutional basis,” Çelik wrote on Twitter. “Turkey and Tunisia have strong political, economic, cultural and humanitarian ties that date back to history. Turkey is on the side of the Tunisian people and respects the fight for democracy.”

Parliament Speaker Mustafa Şentop also commented on the developments, saying: “The incidents in Tunisia are worrying; decisions outlawing the chosen parliament and its deputies from doing their duties is a coup against the constitutional system.”

He underlined that military and bureaucratic coups are illegal everywhere, as is the case in Tunisia.

“The Tunisian people will protect their constitutional system and law.”

The EU on Monday called for respect for the constitution, institutions, and the rule of law.

"We are closely following the latest developments in Tunisia. We call on all Tunisian actors to respect the constitution, its institutions, and the rule of law,” Nabila Massrali, a spokesperson of the EU Commission, told AA. "We also call on them to remain calm and to avoid any resort to violence in order to preserve the stability of the country,” she added.

Meanwhile, soldiers deployed at parliament prevented Ghannouchi and accompanying lawmakers from entering the building. Police intervened Monday to prevent clashes outside the parliament building between lawmakers from the dominant Ennahdha party and demonstrators supporting the president. Both sides shouted and some threw stones, according to an Associated Press (AP) reporter and videos circulating online.

Former President Moncef Marzouki called for political dialogue, saying in a Facebook video, "We made a huge leap backward tonight, we are back to dictatorship.”

German Foreign Ministry spokesperson Maria Adebahr said the government is "very worried” by the events in Tunisia and is in discussion with Tunisian authorities.

"We think it’s important now to return really quickly to the constitutional order,” Adebahr told reporters in Berlin. She stopped short of calling it a coup but said that the Tunisian president appeared to be relying on a "pretty broad interpretation of the constitution” to defend the move