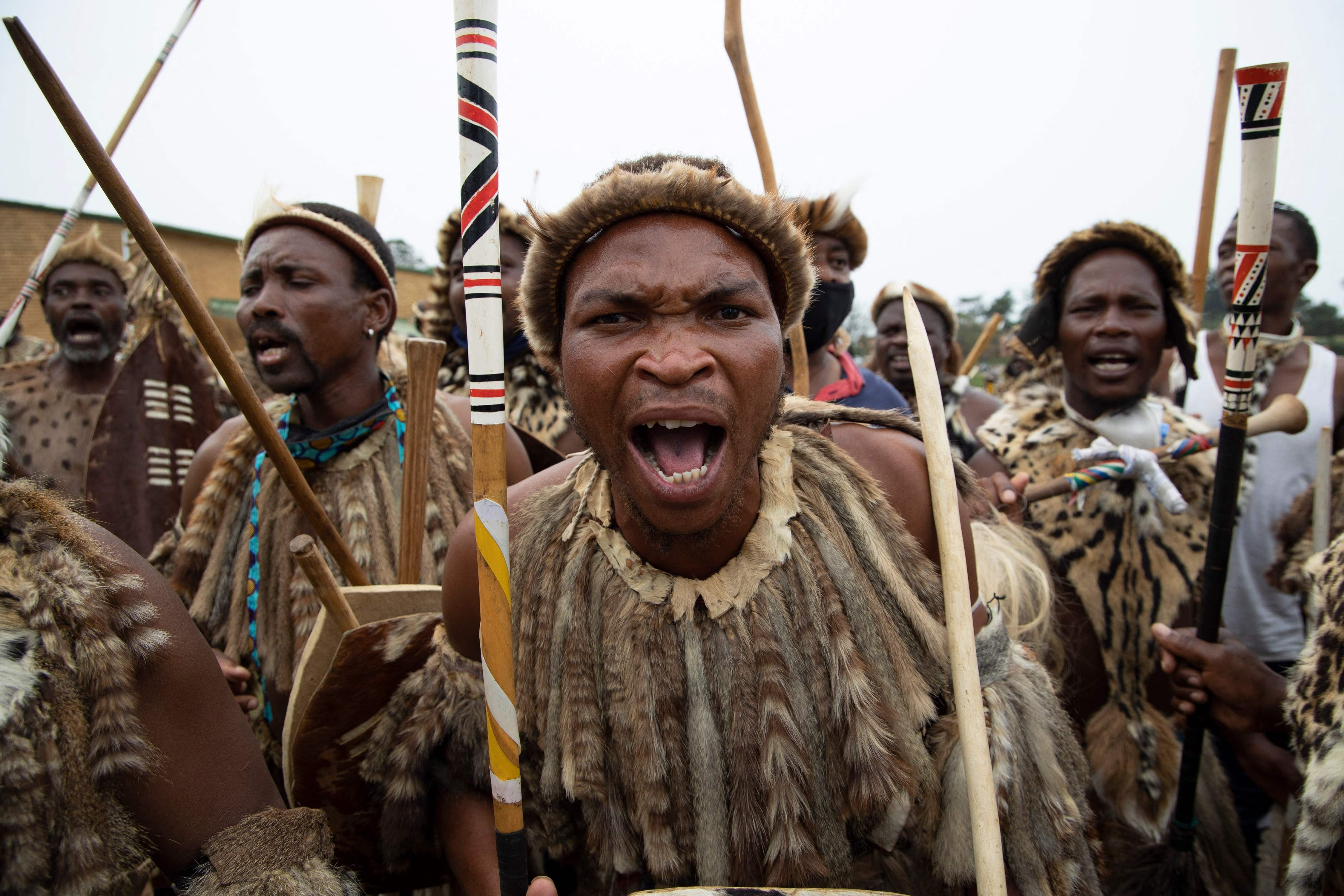 King Goodwill Zwelithini died early on Friday at the age of 72 in the eastern city of Durban after weeks of treatment for a diabetes-related illness.

He was the longest-serving monarch in Zulu history, reigning for half a century through years of apartheid and democratic transition.

His remains have been taken back to his birthplace, the small southeastern town of Nongoma in Kwa-Zulu Natal province, where he will be laid to rest after midnight.

The intimate ceremony, to be conducted behind closed doors, is referred to as a "planting" rather than a burial.

Bare-breasted women in elaborate necklaces and headbands danced and sang as they paraded to the funeral parlour where Zwelithini's body has been kept.

The mourners marched behind a banner reading "thank you for being the shining light of hope."

They stopped for a brief vigil outside the town hall where they were joined by locals, some still in work uniforms.

"We feel extremely naked, we feel like somebody has undressed us, deprived us of the blanket that covered us," said town mayor Albert Mncwango.

A select group of around 50 amaButho were allowed into the mortuary, together with family members in black Range Rovers and Mercedes.

The hearse emerged shortly afterwards, flanked by regiments chanting "we are mourning our king."

Residents lined the streets as the procession slowly made its way to the KwaKhethomthandayo royal residence under a menacing sky.

As the dark clouds thickened, historian Khaya Ndwandwe said the rain was "a symbol that we are planting a king."

Although Zwelithini's title did not bestow executive power, the charismatic king had moral influence over more than 11 million Zulus, nearly a fifth of the country's population.

"He was a symbol of respect, unity and he loved his people," said Mazwi Zulu, 31, a distant cousin to the king.

"He didn't want to see anyone begging."

Zwelithini rose to the throne during apartheid in 1971, aged only 23, three years after his father died.

Returning from hiding over assassination fears, he was crowned as the eighth Zulu monarch.

Zwelithini basked in the legacy of famous and defiant Zulu kings, his ancestors, who inflicted one of the British Empire's worst defeats in 1879.

An elderly resident named "grandpa Fanyana" said he fondly remembered the king as a little boy who enjoyed collecting honey in the bush.

"Since I heard the news I have been too weak to do anything," he told Agence French-Presse (AFP), sporting traditional animal skins and carrying a cowhide shield.

"I remember him as a forgiving disciplinarian."

But Zwelithini was also accused of playing into the hands of the apartheid system's fight against the then banned African National Congress party, which opposed white minority rule.

Following his death, a local newspaper described him as the "custodian of Zulu culture" but also as a "useful idiot in the hands of the apartheid government."

The nation's traditional leaders have been constitutionally recognised since the end of apartheid, and continue to play important symbolic and spiritual roles. South Africa also expects to crown its first official queen in a few years, when she's old enough.

They advise legislators and have a say in cultural, land management and justice administration in their territories.

The Zulu king remains the most influential of all these leaders.

Zwelithini spoke to powerful political leaders during his reign and appeared in public with Nelson Mandela.

He also had visits from President Cyril Ramaphosa and ex-president Jacob Zuma during which they were seen performing a gripping Zulu war dance known as "umzansi."

Ramaphosa himself is expected to deliver the eulogy on Thursday, and has ordered all flags to be flown at half-mast until the evening of the funeral service.

Zwelithini's successor has meanwhile yet to be disclosed.

The monarch had six wives and 28 children.

But his first son, who would traditionally have inherited the throne, was murdered in his Johannesburg home last November at age 50.

The circumstances of his death remain unclear.