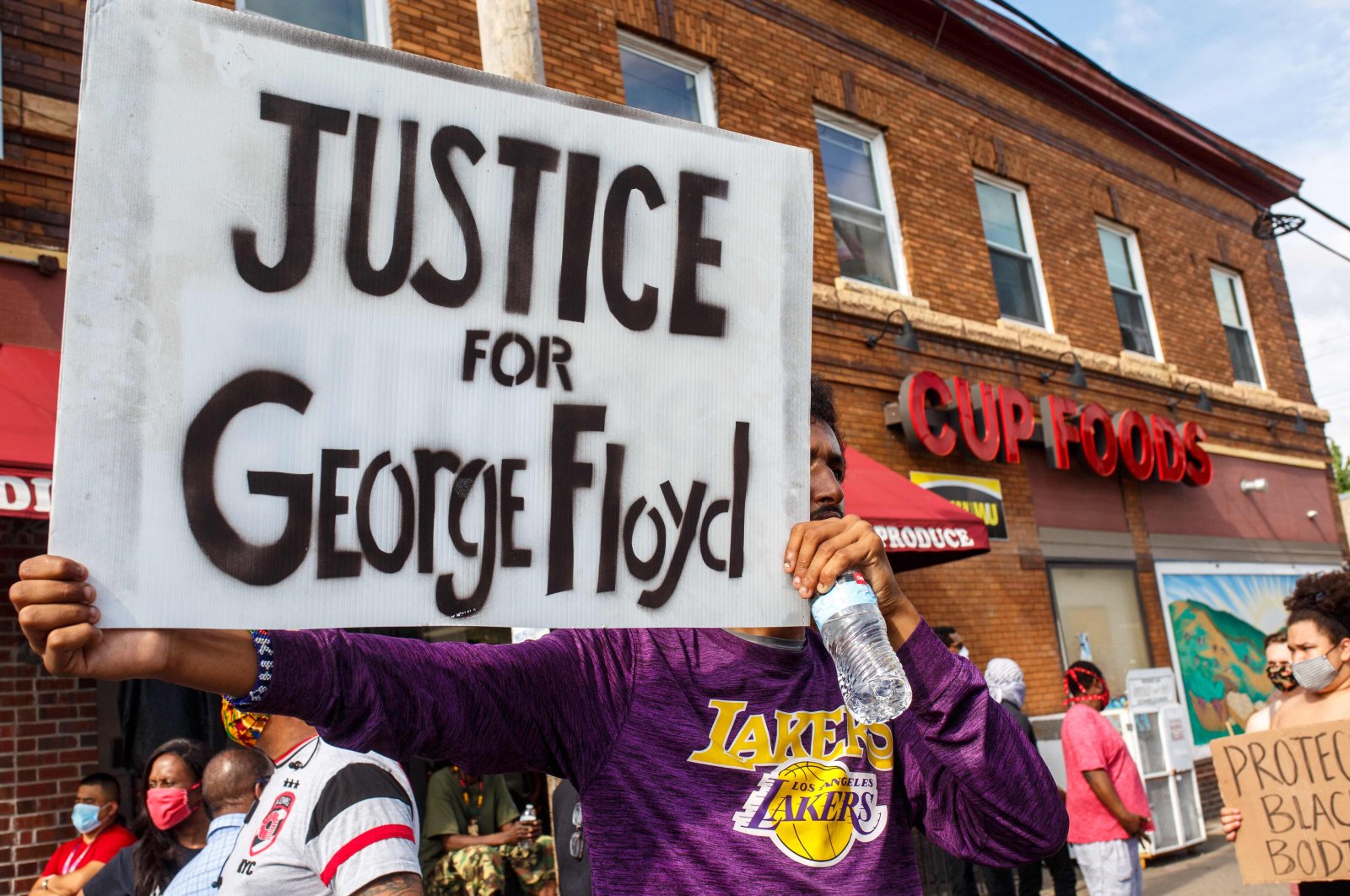 A man holds a sign while protesting near the area where a Minneapolis Police Department officer caused the death of George Floyd, Minneapolis, Minnesota, U.S., May 26, 2020. (AFP Photo)
by Associated Press Mar 05, 2021 9:41 pm
RECOMMENDED

The Minnesota Court of Appeals on Friday ordered a judge to reconsider adding a third-degree murder charge against a former Minneapolis police officer charged in George Floyd’s death, handing a potential victory to prosecutors.

The panel said Cahill should have followed the precedent set by the appeals court last month when it affirmed the third-degree murder conviction of former officer Mohamed Noor in the 2017 shooting death of Justine Ruszczyk Damond.

The unarmed Australian woman had called 911 to report a possible sexual assault. The appeals court sent the case back to Cahill for a ruling consistent with its ruling in the Noor case, giving the judge some leeway to consider other arguments the defense might make against reinstating the charge.

"This court’s precedential opinion in Noor became binding authority on the date it was filed. The district court therefore erred by concluding that it was not bound by the principles of law set forth in Noor and by denying the state’s motion to reinstate the charge of third-degree murder on that basis," the appeals court wrote.

It was not immediately clear if Friday's ruling would force a delay in jury selection for Chauvin’s case, which is due to start Monday. He's currently charged with second-degree murder and manslaughter. Prosecutors did not immediately return a message seeking comment on whether they would seek a delay. Chauvin’s attorney had no comment.

A reinstated third-degree murder count could increase the prosecution’s odds of getting a murder conviction. "We believe the Court of Appeals decided this matter correctly," Minnesota Attorney General Keith Ellison said in a statement.

"We believe the charge of third-degree murder, in addition to manslaughter and felony murder, reflects the gravity of the allegations against Mr. Chauvin. Adding this charge is an important step forward in the path toward justice. We look forward to presenting all charges to the jury in Hennepin County,” Ellison said.

Floyd, who was black, died May 25 after Chauvin, who is white, pressed his knee on Floyd’s neck while he was handcuffed and pleading that he couldn’t breathe. In the wake of his death, civil unrest spiraled into violence locally.

Protests spread worldwide and forced a painful reckoning on racial justice in the U.S. With tensions growing over the looming trial, authorities have already surrounded the courthouse and nearby buildings in downtown Minneapolis with tall barriers of chainlink fencing and razor wire in case protests anticipated before, during and after the trial turn violent.

Cahill ruled last October that third-degree murder under Minnesota law requires proof that someone’s conduct was "eminently dangerous to others,” plural, not just to Floyd. Cahill said there was no evidence that Chauvin endangered anyone else and threw out the charge.

However, the Court of Appeals rejected similar legal reasoning in Noor’s case, ruling that a third-degree murder conviction can be sustained even if the action that caused a victim’s death was directed at just one person.

The appeals court rejected the argument by Chauvin's attorney that the Noor ruling shouldn't have the force of law unless and until it’s affirmed by the Minnesota Supreme Court, which will hear oral arguments in Noor’s appeal in June.