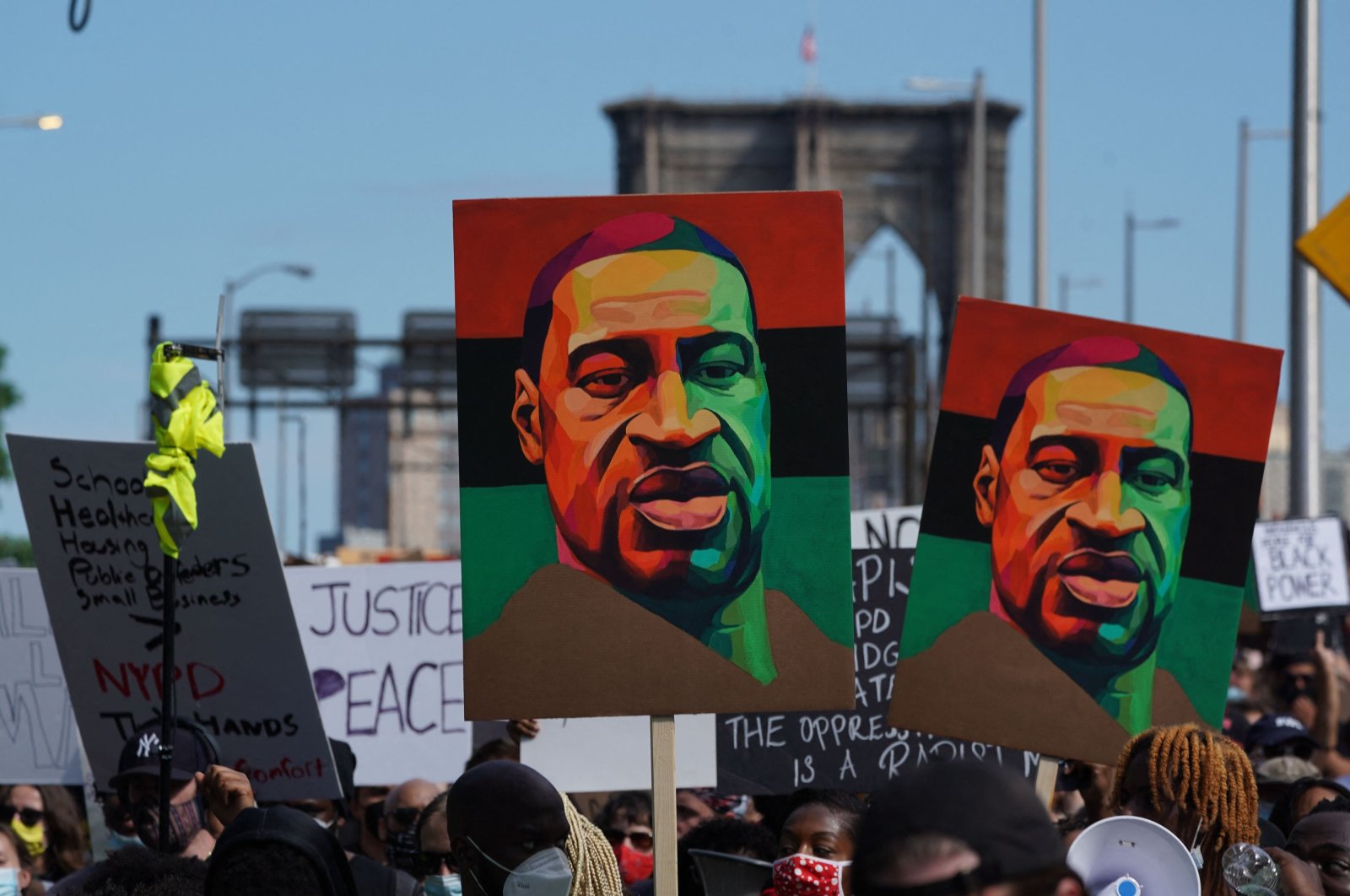 Protesters march across the Brooklyn Bridge over the death of George Floyd in the custody of Minneapolis police officers, during a Juneteenth rally in New York, U.S., June 19, 2020. (AFP Photo)
by Agencies Mar 07, 2021 11:27 am
RECOMMENDED

Dozens of people gathered in front of the Minnesota governor’s mansion on Saturday to demand accountability for police officers, days before a former Minneapolis officer is scheduled to go on trial for the death of George Floyd.

Many of the roughly 150 people who demonstrated in Minnesota were family members of others who died during police encounters, The Associated Press (AP) reported. Similar protests were being organized in cities around the country in advance of the trial of Derek Chauvin. Since his brutal death, Floyd has embodied, more than any other, the black victims of police violence and racism in the United States.

Floyd, a black man, died on May 25 after Chauvin, who is white, pressed his knee against Floyd's neck while Floyd was held face-down on the ground in handcuffs, saying he couldn’t breathe. Body-camera video time stamps provided by prosecutors show Chauvin held his position for about nine minutes, even after Floyd stopped moving. Floyd was later pronounced dead at a hospital. Chauvin is charged with second-degree murder and manslaughter, and jury selection in his trial begins Monday.

Saturday's protest in Minnesota was organized by Families Supporting Families Against Police Violence, a coalition of families who lost loved ones in police confrontations. The Star Tribune reported that speakers said in light of Floyd's death, they want other fatal police encounters reopened and examined.

Nine months after Floyd's death laid bare the racial wounds in the United States, the white police officer charged with murdering the 46-year-old black man is going on trial. Chauvin's case promises to be extraordinary in many respects: it will feature star attorneys, be held under tight security and broadcast live. The Minnesota Attorney General's Office brought in Neal Katyal, a former acting solicitor general who has argued cases before the Supreme Court, to help with the prosecution.

Katyal described Chauvin's trial as a "landmark criminal case, one of the most important in our nation's history."

Ashley Heiberger, a former police officer who now works as an advisor on police practices, said, "The fact that a police officer has been charged criminally for an abusive use of force, that in and of itself is an outlier."

"It's even rarer for them to be convicted," Heiberger said, according to remarks carried by Agence France-Presse (AFP). "There is a tendency for jurors to want to give the police officer the benefit of every doubt."

The circumstances surrounding 44-year-old Chauvin's case, however, are so troubling that "to the best of my knowledge, no police officers or police organizations came out and defended his action," he said.

Three other police officers involved in Floyd's arrest – Alexander Kueng, Thomas Lane and Tou Thao – face lesser charges and will be tried separately. All four officers were fired by the Minneapolis Police Department. Floyd's arrest was prompted by accusations that he had tried to pass off a $20 bill in a nearby store.

Chauvin, a 19-year veteran of the force, was released from prison on bail in the fall and is expected to plead not guilty to murder and manslaughter charges.

"Mr. Chauvin acted according to MPD policy, his training and within his duties as a licensed peace officer of the State of Minnesota," according to his lawyer, Eric Nelson. "He did exactly as he was trained to do." According to Nelson, Floyd died of an overdose of fentanyl.

An autopsy did find traces of the drug in Floyd's system but said the cause of death was "neck compression." Ben Crump, a lawyer representing the Floyd family, said Saturday he was expecting the defense team to attack Floyd's character.

"They're going to call George everything but a child of God, and try to make you forget what you see on that video," he said.

It will take a unanimous verdict by the 12 members of the jury to put Chauvin behind bars for what could potentially be a long prison sentence. Just a single juror not voting for conviction could result in a hung jury and give rise to another wave of anti-racism demonstrations. The authorities have mobilized thousands of police officers and members of the National Guard to provide security during the trial.

The Hennepin County courthouse where it is taking place currently resembles an armed camp surrounded by concrete barriers and barbed wire fencing. The trial is set to begin on Monday at 8 a.m. CST (2 p.m. GMT) with jury selection – a delicate process considering the widespread publicity surrounding the case.