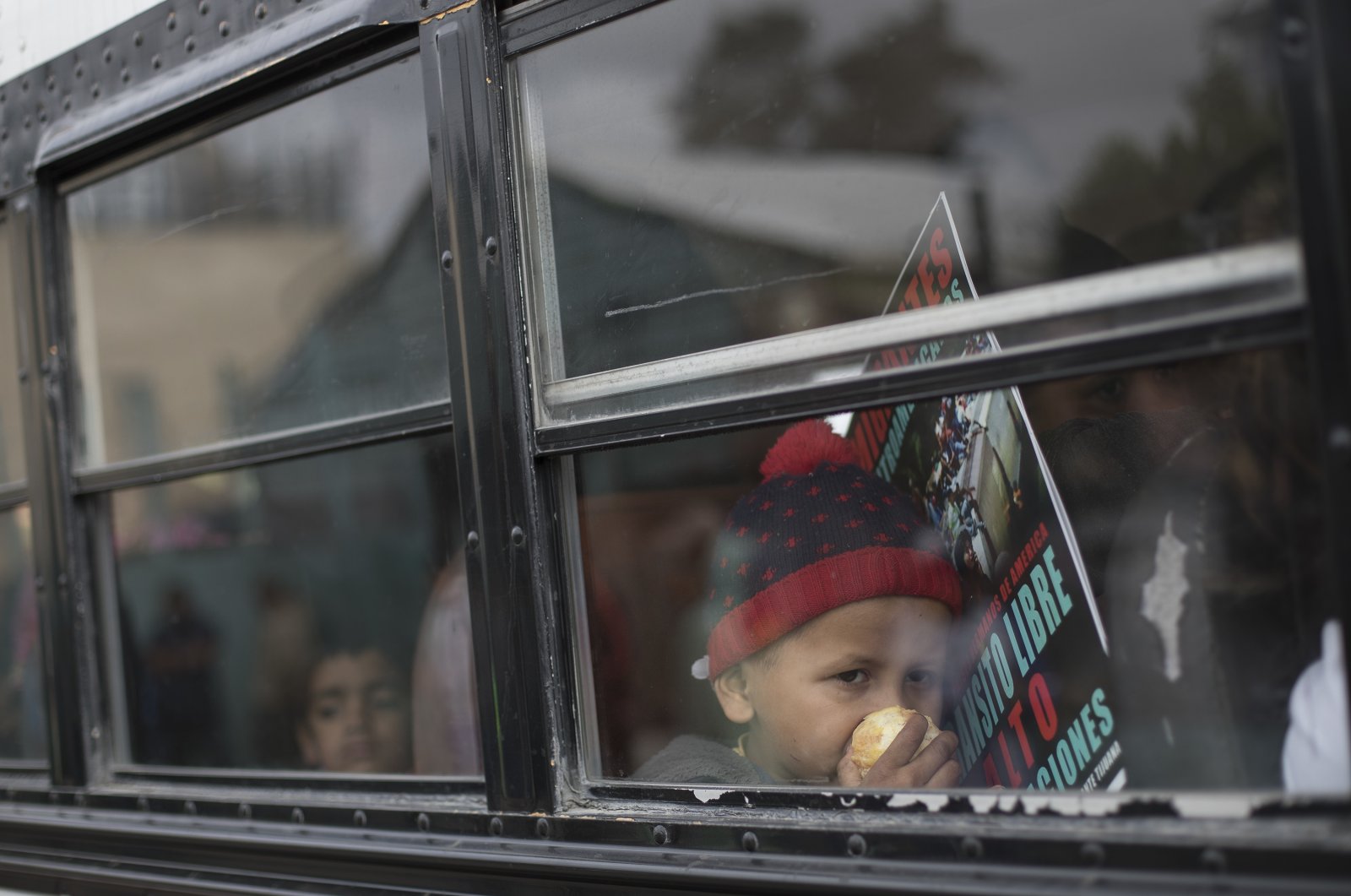 A Central American child who is traveling with a caravan of migrants, eats an orange and peers from a bus carrying the group to the border wall for a gathering of migrants living on both sides of the border, in Tijuana, Mexico, Sunday, April 29, 2018. (AP Photo)
by French Press Agency - AFP Feb 03, 2021 9:03 am
RECOMMENDED

In May 2018, a six-year-old Honduran boy named Andres was wrested kicking and screaming from his father by U.S. border guards implementing Donald Trump's "zero tolerance" policy toward undocumented immigrants.

It took another 10 months for the pair to be reunited – but they were among the lucky ones.

Hundreds of migrant children like Andres are still waiting to rejoin their parents after being taken away by the Trump administration.

President Joe Biden has prioritized creating a special task force to reunify the families as part of his sweeping rolling back of Trump's hardline policies, which focused on deterring migration from Central America.

"It was a moral failure and a national shame that the prior administration used family separation as a weapon against desperate families and children," an administration official briefing on Biden's plans told journalists.

Trump came to power in 2017 promising to halt the mass movement of undocumented migrants over the southern border.

But an initial crackdown only slowed the flow, with tens of thousands of individuals and families – especially from Honduras, Guatemala and El Salvador – crossing each month, and few mechanisms in place to send them back.

A year later he announced the zero-tolerance program, declaring that any undocumented border crossers would be arrested and charged with a crime, drawing wide criticism.

As part of the new regime, children were separated from their parents, on a promise that the families would be reunited within weeks. But this did not happen in thousands of cases.

The policy was applied with little mercy, court filings showed.

After being taken from his father Jacinto, Andres went into the custody of U.S. officials, while his father was deported to Honduras.

While their separation lasted less than a year, it took a full 16 months to reunite 13-year-old Karina from the mother she was torn from on Christmas Day 2017 as she was placed in handcuffs.

Her mother Lorena remembered how Karina cried and made a heart sign with her hands as they were separated after having been detained in a cell so cold migrants called it "the freezer."

Another youngster, seven-year-old Diana, went to sleep with her father in an immigration facility and woke up to find he was gone, taken away by U.S. authorities.

A public outcry and lawsuits forced the Trump administration to halt the separations, but for as many as 5,000 children, the damage had already been done.

And Cesar Rios, director of the Salvadoran Institute of Migrants, said the separation of families fleeing poverty and violence was "inhumane."

According to a document in one of those cases dated in January, 611 children had still not been reconnected with their parents.

Underscoring the issue of poor documentation, the court filing says that for 392 migrant children, their parents "are believed" to have been deported.

For another 201, the parents "are believed" to be in the United States. And for 18, there are no known contacts.

No one really knows how many children remain without their families but the figure is estimated to be as high as 1,000, said the Biden official.

Cathleen Caron, director of the organization Justice in Motion, told Agence France-Presse (AFP) that the poor data is only part of the difficulty in reuniting the families.

Many of them are from rural, inaccessible mountain communities, with reunification made even harder by the coronavirus pandemic and two hurricanes that ravaged Central America last fall.

"There is very little trust that anyone's going to help these families, right, they were deeply harmed by the US government having their children ripped away," Caron said. "They don't trust anyone."

The new task force will have to come up with policies to deal with reunifications.

One key question is whether the children who are reunited will be permitted to stay in the United States legally with their parents.

Migrant advocate groups also want the children to be able to benefit from counseling for the trauma of separation – a separation that, for example, left Karina with suicidal thoughts that continue today.

On these questions Biden's immigration advisors remain cautious, saying they have to act within U.S. law, but adding that each family's situation can be different.