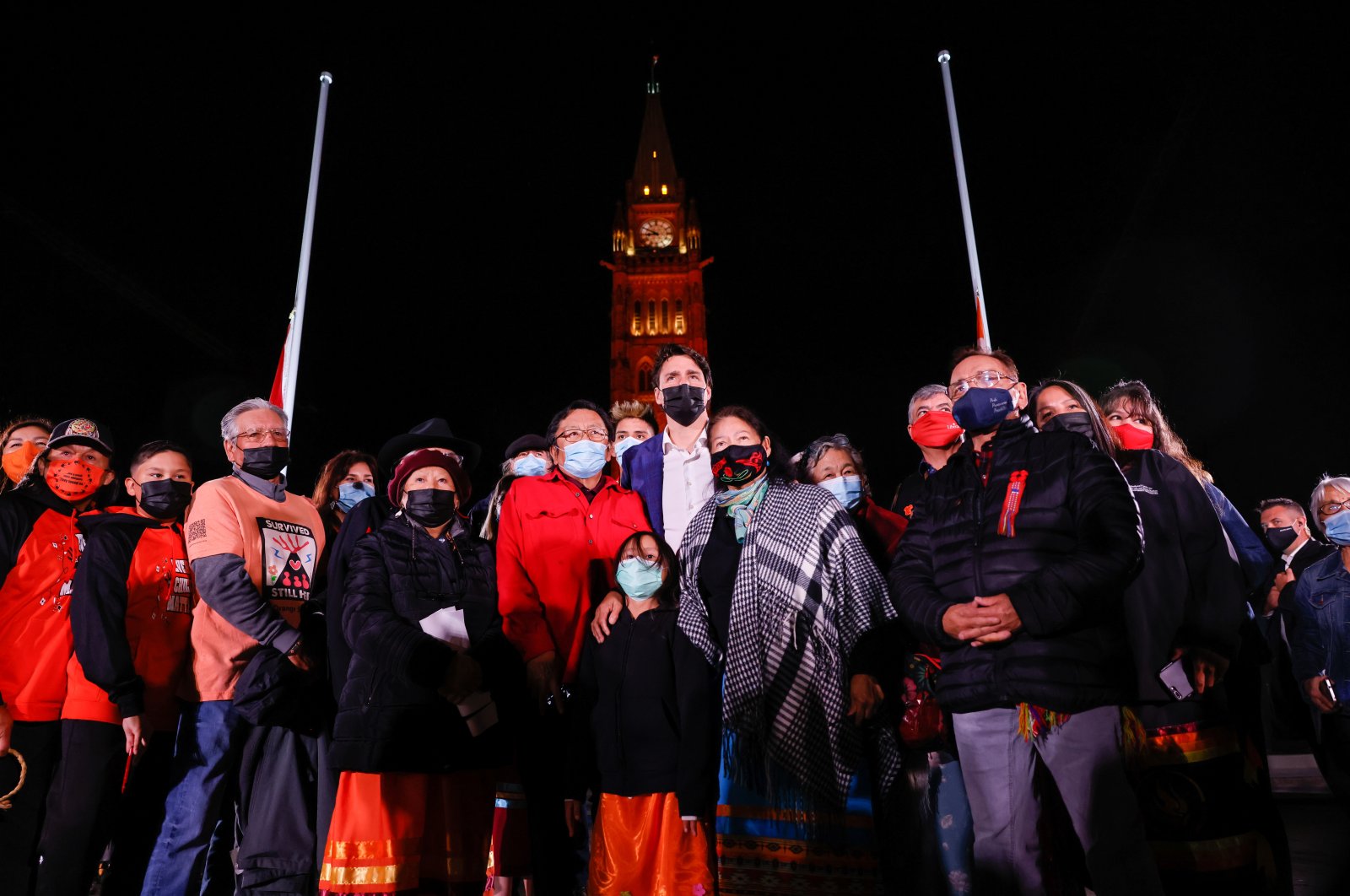 Canadian Prime Minister Justin Trudeau poses for a group photo with survivors and family members, on the eve of Canada's first National Day for Truth and Reconciliation, honoring the lost children and survivors of Indigenous residential schools, their families and communities on Parliament Hill in Ottawa, Ontario, Canada Sept. 29, 2021. (Reuters Photo)
by Anadolu Agency
Oct 01, 2021 12:16 am

"I join with all Canadians on this first National Day for Truth and Reconciliation to reflect on the painful history that Indigenous peoples endured in residential schools in Canada," the Queen said in a statement, adding that there is more work "that remains to heal and to continue to build an inclusive society."

Sept. 30 was established by the government of Prime Minister Justin Trudeau to honor an estimated 6,000 children who died while attending Indian Residential Schools and in an attempt for Canada to face its sordid past. Also honored were 150,000 children who attended the schools from their beginning in the 1820s until the last of 139 schools that were closed in the 1990s.

Some were removed from their families and forced into the schools, many of which were run by the Catholic Church. The goal was to eradicate Indigenous culture in the children. Some were subjected to physical, sexual and psychological abuse, as well as diseases like tuberculosis.

The ceremonies also commemorated the families affected by the schools and the hundreds of unmarked graves of children that have been uncovered, mostly at the schools – more than 1,000 this summer as the search continues. Some were buried and their families were never informed of the deaths of the children.

On the eve of the reconciliation day, Trudeau participated in a ceremony on Parliament Hill and spoke of the loss to the Indigenous communities of First Nations, Inuit and Metis.

"Today, I invite everyone across the country to recognize and observe the first National Day for Truth and Reconciliation," Trudeau said in a statement obtained by Anadolu Agency (AA).

"It is a day to reflect on the painful and lasting impacts of residential schools in Canada and to honor survivors, their families, and their communities. It is also a day to remember the many children who never returned home, and an opportunity for us all to learn more, and to affirm the need for reconciliation and commit ourselves to the work ahead.

"The tragic locating of unmarked graves at former residential school sites across the country has reminded us of not only the impacts of colonialism and the harsh realities of our collective past but also the work that is paramount to advancing reconciliation in Canada," read the statement.

The ceremonies were also designed to teach Canadians about the abysmal historical treatment suffered by Indigenous peoples and the discrimination that continues to this day.

Mary Simon, Canada's first Indigenous governor general – the Queen's representative as head of state in Canada – said the day was a chance for Canadians to face "uncomfortable truths."

"As we strive to acknowledge the horrors of the past, the suffering inflicted on Indigenous peoples, let us all stand side-by-side with grace and humility, and work together to build a better future for all," she said in a statement.

At the ceremonies that took place across Canada, many wore orange T-shirts, a symbol that has come to be representative of the tragedy of residential schools.