Canadian PM takes a knee with protestors for racial justice 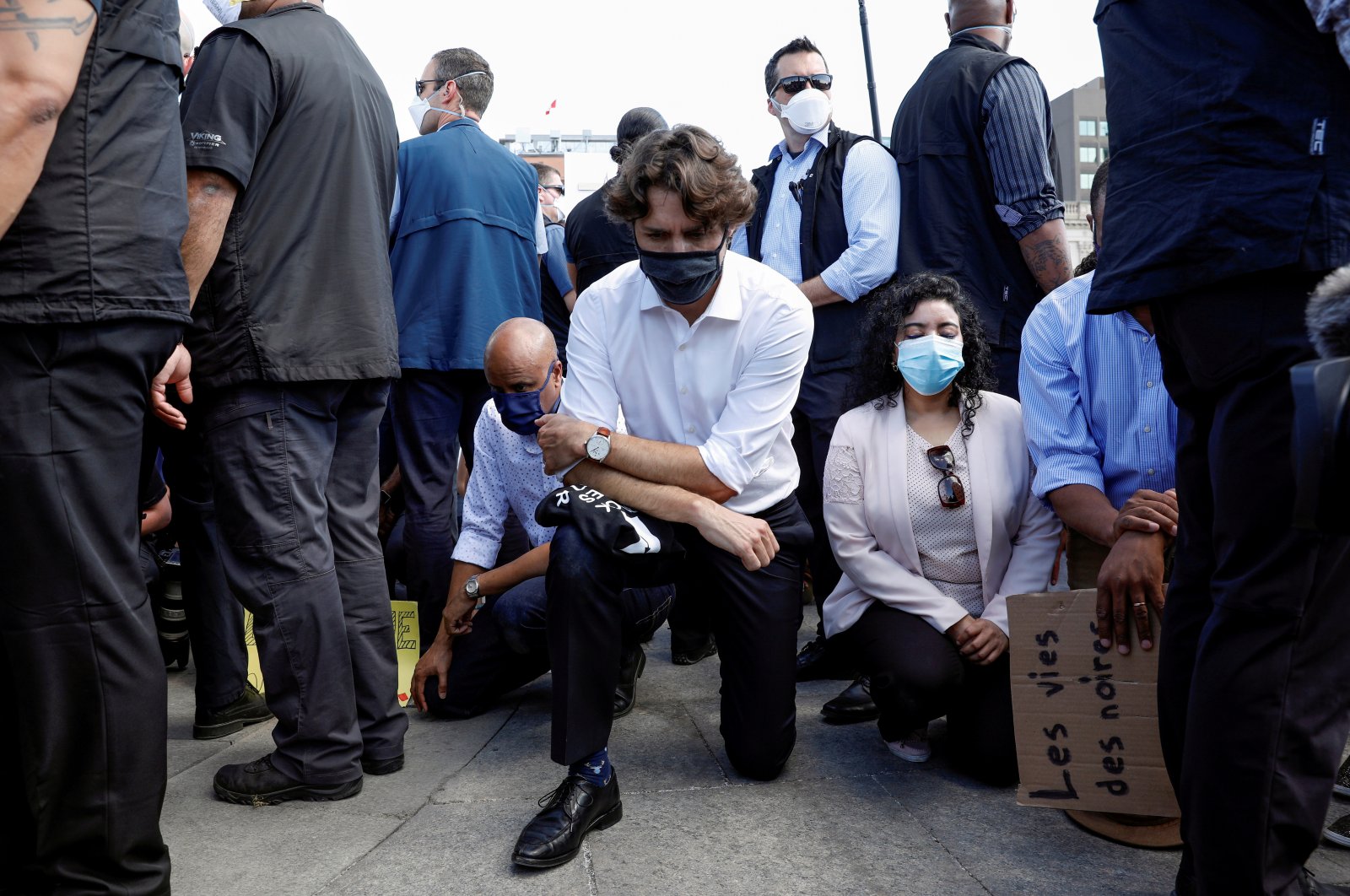 Canada's Prime Minister Justin Trudeau wears a mask as he takes a knee during a rally against the death in Minneapolis police custody of George Floyd, on Parliament Hill, in Ottawa, Ontario, Canada June 5, 2020. (Reuters Photo)
by French Press Agency - AFP Jun 06, 2020 10:23 am
RECOMMENDED

Prime Minister Justin Trudeau joined thousands on Friday in taking a knee in front of Canada's parliament in solidarity with U.S. protesters marching against racism and police brutality.

It marked a rare public outing for the Canadian leader since the start of the COVID-19 pandemic, as protests spread outside the United States after police in Minnesota killed an unarmed black man.

"Far too many Canadians feel fear and anxiety at the sight of law enforcement officers," Trudeau told his daily briefing earlier in the day.

"Over the past weeks, we've seen a large number of Canadians suddenly awaken to the fact that the discrimination that is a lived reality for far too many of our fellow citizens is something that needs to end."

Trudeau, holding a "Black Lives Matter" T-shirt, chanted from behind a mask along with the crowd that extended several blocks to the U.S. embassy, later standing in silence for eight minutes and 46 seconds.

This was the length of time that a white police officer in Minneapolis knelt on the neck of George Floyd, an unarmed African-American, who died after pleading "I can't breathe."

Video of Floyd's May 25 death has gone viral and sparked sometimes violent protests across the United States and mass demonstrations in European capitals and elsewhere.

"Look at the diversity of this crowd," said Families Minister Ahmed Hussen, who joined Trudeau at the Ottawa protest. "These are not just black Canadians. It's everyone who's saying black lives matter."

Similar protests took place in cities across Canada. In Toronto, Police Chief Mark Saunders and several uniformed officers met protestors marching through downtown, and also took a knee. "We see you and we are listening," he tweeted. "We have to all stay in this together to make a change."

"That's what you call true leadership," he said.

Ottawa protestor Stephane Kribodo said there was too much racism – "in the world, in France, in the United States, in Canada."

"It's important to stand up against it if we want change," he said.

Two women with mental health problems, in Toronto and the town of Edmundston, New Brunswick, died after calling the police for help. An Inuit man in the far north was struck by a police cruiser.

"We want a just (pandemic) recovery for all and that requires taking action against racism," Scott said.

On Tuesday, Trudeau appeared at a loss for words, pausing for 20 seconds when pressed for his thoughts on U.S. President Donald Trump's threat of military mobilization against violent protests.

"We all watch in horror and consternation at what's going on in the United States," he said finally.

Now "is a time to listen, it is a time to pull people together and a time to learn what injustices continue despite progress over years and decades," he added.