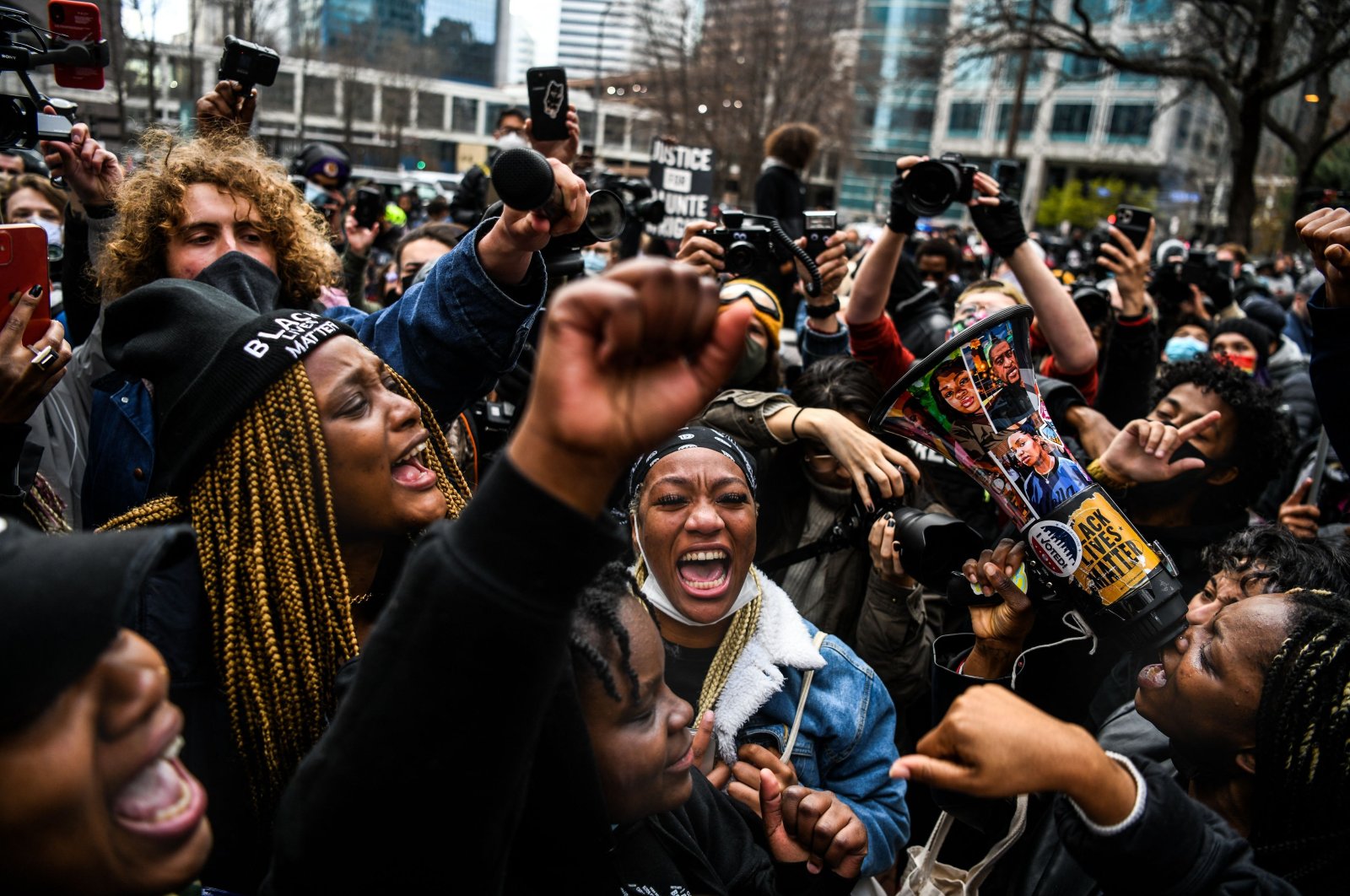 People celebrate as the verdict is announced in the trial of former police officer Derek Chauvin outside the Hennepin County Government Center in Minneapolis, Minnesota, U.S., April 20, 2021. (AFP Photo)
by Daily Sabah with AP Apr 21, 2021 12:46 pm

Joy, tears and calls for change broke out after a U.S. jury found former Minneapolis police officer who killed George Floyd after kneeling on his neck for more than nine minutes, guilty on all counts

The world came together in a united front as millions of people held their breath for the Derek Chauvin trial verdict. It was not about one police officer killing a black man. It was about racial discrimination and police brutality, two serious human rights problems which go hand in hand in the United States and other parts of the globe.

There was quiet, just for a moment, as hundreds of people standing in the intersection at 38th Street and Chicago Avenue crowded in to listen to the news. "They’re announcing the verdict!” someone shouted, calling for silence. Then thunderous cheering filled the place where George Floyd was pinned beneath a police officer's knee nearly a year ago, begging for air. Many people wept. Some sobbed. They were cheering the first guilty verdict for the fired officer, Chauvin, who was charged with murder and manslaughter.

Moments later, another wave of cheers swept the crowd as the other two verdicts – both guilty – were announced. Moments after that, Chauvin put his hands behind his back and was led out of the courtroom in handcuffs. In the place now known as George Floyd Square, a spot that millions around the world have seen in videos shot by bystanders during Floyd's arrest, there was relief.

Some 300 people gathered in the intersection, home to Cup Foods, the corner convenience store where employees had called police on the evening of May 25, saying Floyd had paid for cigarettes with a counterfeit $20 bill. It was Memorial Day. Since then, thousands have come to lay flowers, poems, photos and letters at the site where Floyd had the air choked out of him. They came to stand beside the sculpture that now fills the middle of the street, a huge metal fist raised as a cry for justice.

They came to look at the now-closed gas station, where the sign had been covered long ago with a demand: "Justice for George Floyd.” On Tuesday, a protester climbed onto the sign to add two more words: "Justice Served.”

Millions of people paused in front of television sets or other screens Tuesday. Three times they heard a Minnesota judge, Peter Cahill, read the jury's verdict declaring Chauvin guilty. Cahill's words led to a visible release of tension, both in the faces of news anchors onscreen and in crowds captured by cameras outside.

"Thank you, Jesus,” responded anchor Don Lemon on CNN. "My stomach isn't in knots anymore,” said analyst Eddie Glaude on NBC, according to remarks carried by The Associated Press (AP). "I do think this will restore some faith in the justice system that was so badly needed,” said Gayle King, CBS News anchor.

Because Floyd's death had been so vividly captured in cell phone footage by bystanders, the case led to instant protests and reckonings on race last year, moments emotionally relived during Chauvin's trial. Shortly after Cahill polled the jury, Chauvin was taken into custody.

"The whole world just got to see that: Derek Chauvin led away in handcuffs,” said MSNBC's Brian Williams. On ABC News, commentator Sunny Hostin wiped away tears and spoke about her nervousness about the verdict. She said her 18-year-old son lives in South Africa, and she feels that he is safer there. "I really believe that this is a movement that we're seeing,” she said. "For that I am so very thankful that perhaps we will see real change, much needed change in this country.”

On Fox News Channel, former prosecutor Jeanine Pirro said that "clearly the verdict was supported by the facts.” But new late-night host Greg Gutfeld drew some gasps and groans from colleagues for his reaction. "I'm glad that he was found guilty on all charges,” Gutfeld said, "even if he might not be guilty of all charges. I'm glad that he was found guilty of all charges because I want a verdict that keeps this country from going up in flames."

Leaders around the world also hailed the verdict with the country's President Joe Biden saying that "no one should be above the law."

"Today’s verdict extends that message, but it is not enough. We can’t stop here," Biden said, while former U.S. President Barack Obama wrote that "we cannot rest ... And as we continue the fight, we can draw strength from the millions of people – especially young people – who have marched and protested and spoken up over the last year, shining a light on inequity and calling for change. Justice is closer today not simply because of this verdict, but because of their work.”

"Relieved-and emotional in ways I didn’t expect. I cried tears of joy as each verdict was read," number one American TV host Oprah Winfrey expressed her happiness in Instagram. British Prime Minister Boris Johnson wrote on Twitter that he was "appalled by the death of George Floyd and welcome this verdict."

"My thoughts tonight are with George Floyd's family and friends," Johnson added.

Meanwhile, Philonise Floyd, George Floyd's brother said that he get DMs from people around the world. "Brazil, from Ghana, from Germany – everybody – London, Italy, they’re all saying the same thing: ‘We won’t be able to breathe until you’re able to breathe.’ Today, we are able to breathe again."

"There is no jury verdict that could possibly construct or suture the internal void that Gianna will continue to carry for the rest of her life, however when she stated that her daddy changed the world, this verdict will serve as a pointed and remarkable source for her to relish and find that her daddy did in fact change the world," Daniel R. Meachum, attorney for Roxie Washington, the mother of Floyd's only child, Gianna Floyd said.

For those gathered on Tuesday, they had seen at least the beginning of justice. "Let the healing work begin,” said Jennifer Starr Dodd, a Minneapolis woman, speaking through her tears. "Repentance, accountability, respect. You can’t have healing without repentance.”

By early evening, the square was a scene of celebration, prayer and community relief. More and more people streamed in. Someone played a tuba. There were occasional chants of "Say his name! George Floyd!” People danced to Tye Tribbett's "We Gon’ Be Alright” and sang along to Notorious B.I.G.'s "Juicy,” throwing their arms around each other and raising their hands in the air.

It remains unclear what will happen to the square, which sprang up organically in the days after Floyd’s death, when community members put up homemade barricades to close it off. The city later replaced them with concrete barriers. It has been a place of pilgrimage and picnics, with people painting slogans and portraits on walls and the streets, leaving flowers and sometimes just hanging out and grilling hot dogs.

But neighborhood residents and entrepreneurs say the barricaded square led to a spike in crime and decimated businesses. City leaders have said they would reopen it after Chauvin’s trial, but the activists who serve as the square's unofficial leaders say they will not step aside unless the city meets their long list of demands, including recalling the county prosecutor and firing the head of the state’s criminal investigative agency. Neither is likely to happen.

As the sun set over the square, Floyd's aunt, Angela Harrelson, spoke to the crowd. "When you came out to protect that site, to keep it sacred, you guys created a domino effect,” she said. "I don’t know all of your names, but I see you. I hear you. I appreciate you, and I won’t forget you.”

At one point on Tuesday, someone began throwing $1 bills in the air to symbolize the alleged counterfeit bill that led to Floyd’s death, and other people quickly followed. The money was soon collected in glass jars to become a donation – though it wasn’t really clear for what – and laid beside the flowers that now mark the spot where Floyd stopped breathing. Eliza Wesley has been a near-constant presence at the square since Floyd’s death.

She calls herself the Gatekeeper. Before the verdict was announced, she led the crowd in prayer. "I don’t have any doubt in you, God,” she said. "We’ve been here for 11 months.”

"This is the day the Lord has made.”