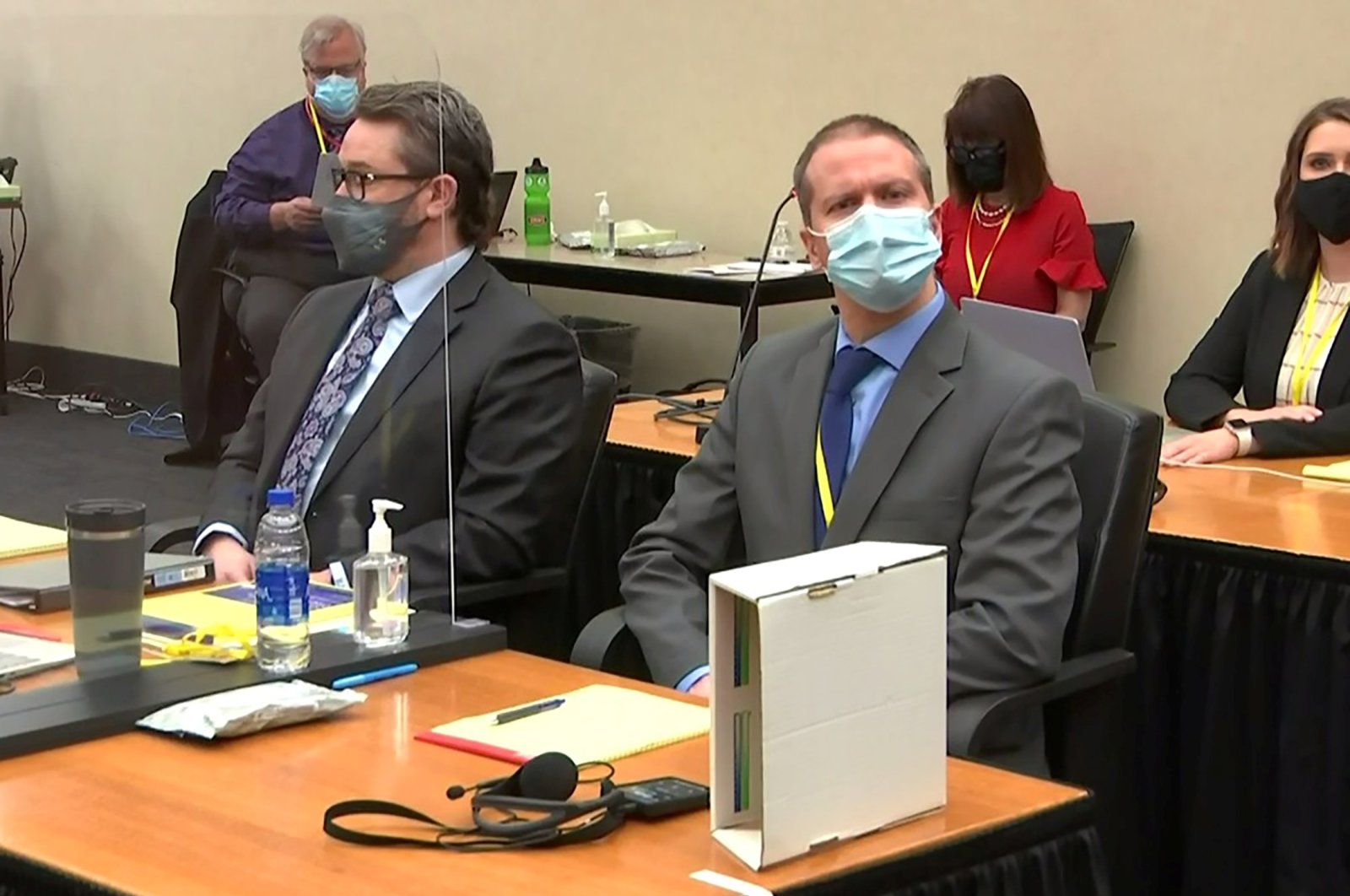 The former Minneapolis police officer charged with killing George Floyd went on trial Monday, with a prosecutor telling the jury that the figure to remember is 9 minutes, 29 seconds – the amount of time Derek Chauvin's knee was on Floyd's neck as the black man pleaded for his life and went limp.

Prosecutor Jerry Blackwell told jurors that Chauvin "didn’t let up, he didn’t get up” even after Floyd said 27 times that he couldn’t breathe and went motionless.

"Nine minutes and 29 seconds is how long that went on," Blackwell told the jury. "You will learn that on May 25 of 2020 Mr. Derek Chauvin betrayed his badge when he used excessive and unreasonable force upon the body of Mr. George Floyd," Blackwell said.

"He put his knees upon his neck and his back, grinding and crushing him, until the very breath, no ladies and gentlemen, until the very life, was squeezed out of him,” Blackwell said.

Underscoring the central role the bystander video will play in the case, the prosecution played the footage for the jury during opening statements.

The video was posted to Facebook by a bystander who witnessed Floyd's arrest after he was accused of trying to pass a counterfeit $20 bill at a convenience store. "My stomach hurts. My neck hurts. Everything hurts,” Floyd says, and "I can’t breathe officer.”

Onlookers repeatedly shout at the officers to get off the 46-year-old Floyd. One woman, identifying herself as a city Fire Department employee, shouts at Chauvin to check Floyd’s pulse.

The widely seen footage caused revulsion across the U.S. and beyond and prompted calls for the country to confront racism and police brutality.

Defense attorney Eric Nelson countered by arguing that "Chauvin did exactly what he had been trained to do over his 19-year career.”

Floyd was resisting arrest, and Chauvin arrived to assist other officers who were struggling to get Floyd into a squad car as the crowd around them grew and became increasingly hostile, Nelson said.

The defense attorney also disputed that Chauvin was to blame for Floyd’s death. Floyd had none of the telltale signs of asphyxiation and had fentanyl and methamphetamine in his system, Nelson said.

He said Floyd’s drug use, combined with his heart disease, high blood pressure and the adrenaline flowing through his body, caused a heart rhythm disturbance that killed him.

"There is no political or social cause in this courtroom,” Nelson said. "But the evidence is far greater than 9 minutes and 29 seconds.”

Blackwell, however, rejected the argument that Floyd’s drug use or any underlying health conditions were to blame, saying it was the officer's knee that killed him.

Blackwell said bystander witnesses would include the Minneapolis Fire Department first responder who wanted to administer aid. He said Chauvin pointed Mace at her.

"She wanted to check on his pulse, check on Mr. Floyd’s well-being,” Blackwell said. "She did her best to intervene. When she approached Mr. Chauvin ... Mr. Chauvin reached for his Mace and pointed it in her direction. She couldn’t help.”

Blackwell made clear he was not trying to put all police on trial, but only Chauvin, who was fired from the Minneapolis police department after the incident.

"But one of those things that this case is not about: all police, all policing. Police officers have difficult jobs ... They sometimes have to make split-second life and death decisions," he said. "This case is about Mr. Derek Chauvin," he added.

The first witness was Minneapolis police dispatcher Jena Scurry, who testified that she saw part of Floyd's arrest unfolding via a city surveillance camera and was so disturbed that she called a duty sergeant.

Scurry said she grew concerned because the officers hadn’t moved after several minutes. "You can call me a snitch if you want to,” Scurry said in her call to the sergeant, which was played in court.

She said she wouldn't normally call the sergeant about the use of force because it was beyond the scope of her duties, but "my instincts were telling me that something is wrong.”

Jurors watched intently as the video played on multiple screens, with one drawing a sharp breath as Floyd said he couldn’t breathe. Chauvin sat calmly during opening statements and took notes, looking up at the video periodically.

Legal experts said they expected prosecutors to play the video to the jury early on. "If you’re a prosecutor you want to start off strong. You want to frame the argument, and nothing frames the argument in this case as much as that video,” said Jeffrey Cramer, a former federal prosecutor and managing director of Berkeley Research Group in Chicago.

Floyd was declared dead after Chauvin, who is white, pressed his knee against Floyd’s neck as he lay handcuffed on his belly on the pavement, crying "I can't breathe."

Chauvin, 45, is charged with unintentional second-degree murder, third-degree murder and manslaughter. Almost all of the jurors selected during more than two weeks of questioning said they had seen at least parts of the video, and several acknowledged it gave them at least a somewhat negative view of Chauvin. However, they said they could set that aside.

About a dozen people chanted and carried signs in the middle of the street outside the courthouse entrance as Floyd family attorney Ben Crump, the Rev. Al Sharpton and members of the Floyd family passed by on their way inside.

The trial is expected to last about four weeks at the courthouse in downtown Minneapolis, which has been fortified with concrete barriers, fencing and barbed and razor wire. City and state leaders are determined to prevent a repeat of damaging riots that followed Floyd’s death, and National Guard troops have already been mobilized.

The key questions at trial will be whether Chauvin caused Floyd’s death and whether his actions were reasonable. For the unintentional second-degree murder charge, prosecutors have to prove Chauvin’s conduct was a "substantial causal factor” in Floyd’s death and that Chauvin was committing felony assault at the time.

Chauvin’s attorney, Eric Nelson, was expected to use his opening statement to tell jurors that medical testimony and use of force experts will show a different view. Nelson has made clear that the defense will make an issue of Floyd swallowing drugs before his arrest, seeking to convince the jury that he was at least partially responsible for his death.

The county medical examiner's autopsy noted fentanyl and methamphetamine in Floyd's system, but listed his cause of death as "cardiopulmonary arrest, complicating law enforcement subdual, restraint and neck compression.”