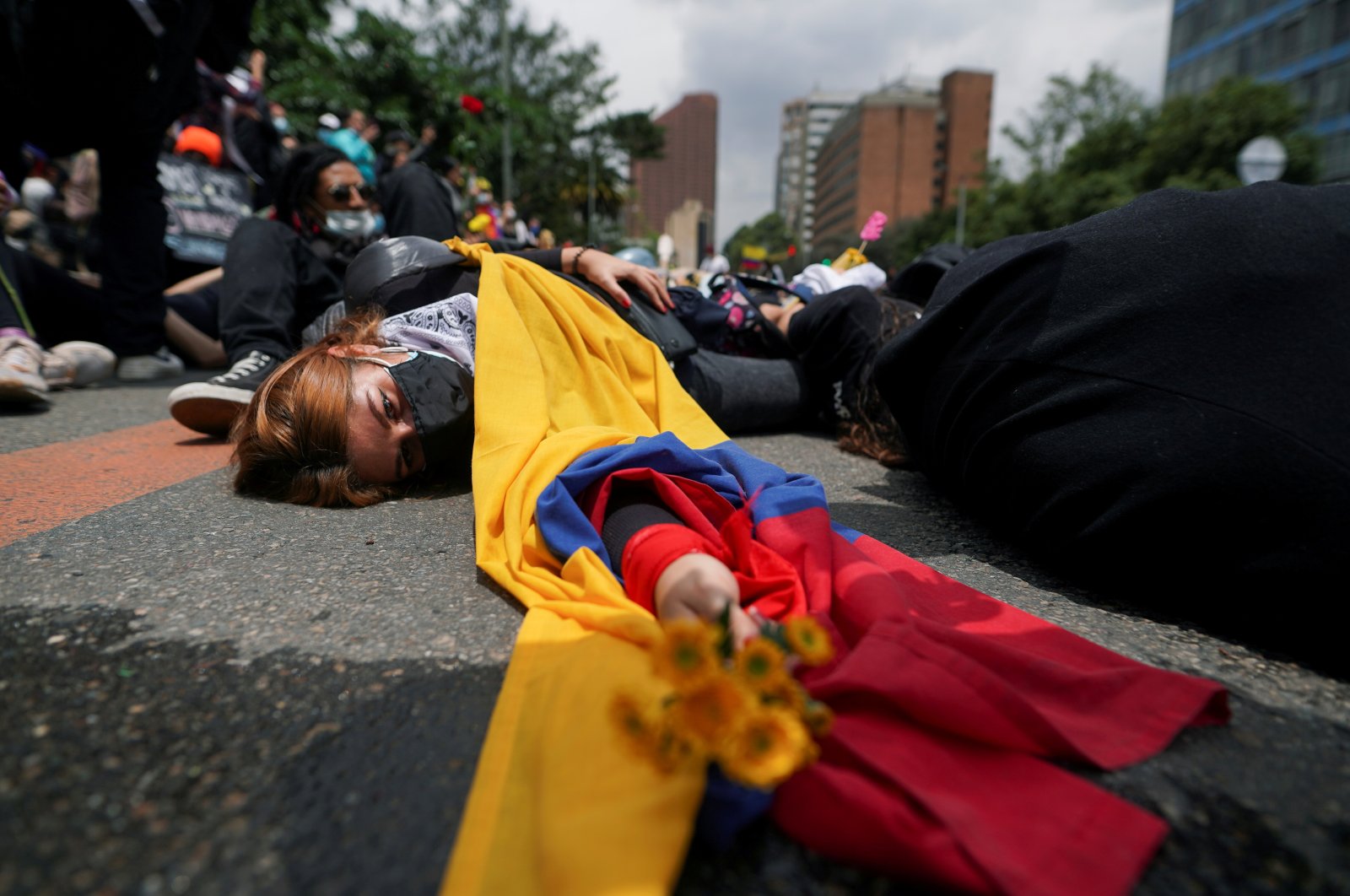 Demonstrators participate in a protest against poverty and police violence in Bogota, Colombia, May 5, 2021. (Reuters Photo)
by French Press Agency - AFP May 06, 2021 9:29 am
RECOMMENDED

Thousands of protesters Wednesday hit the streets in Colombia for the eighth straight day of demonstrations that have seen dozens killed and hundreds injured.

Students, unions, indigenous people and other groups assembled in the capital, Bogota, as well as the cities of Medellin in the northwest and Cali in the southwest.

Their frustration was initially triggered by a proposed tax reform that has since been withdrawn. However, the government's policies on health, education and inequality, as well as the violent repression by security forces, have continued to fuel the anger of demonstrators.

According to official figures, at least 24 people have died – 18 of whom were shot – with more than 800 others wounded and 89 people reported missing during the week.

Reporters Without Borders meanwhile said that 76 journalists were assaulted, 10 of whom were injured by security forces.

Presidential adviser Miguel Ceballos said that the government will meet with demonstrator representatives next week, while the high courts requested that any conversations include all parties from among those engaging in "peaceful protests and social unrest."

Thousands, most wearing face masks to prevent the spread of COVID-19, gathered at the downtown Plaza Bolivar near the presidential headquarters. Police prevented one group from entering Congress.

Another 8,000 people took to the streets of Medellin, Colombia's second-largest city, by mid-morning.

While the demonstrations have been mostly peaceful, violence has escalated in some cities.

Despite recent calls for calm from the international community, fresh havoc gripped the capital overnight.

"Police are attacking us ... we're not vandals," said a 36-year-old woman named Natalia who declined to give her last name. She was in a crowd of people dressed in mourning garb.

The aftermath of the clashes was visible Wednesday in the form of torched police stations, vandalized bus shelters and banks, and smoldering tires.

"It hurts to see this, but what hurts even more is the negligence of a deaf government that prefers to send out the security forces," Hector Cuinemi, a 19-year-old student in Bogota, said.

On Tuesday, the United Nations, European Union and the United States, as well as human rights organizations, criticized Colombian security officers' use of force.

One of the worst incidents took place in Cali late Monday when five people died and 30 were wounded.

By Wednesday, many roadblocks remained in Cali – Colombia's third most populous city and one of the most violent in Latin America – with trucks carrying fuel and medical supplies requiring military and police protection to get through as the country battles a second wave in the coronavirus pandemic.

The government blames the violence on armed gangs, including dissidents of the disbanded leftist Revolutionary Armed Forces of Colombia (FARC) guerrillas, members of another leftist rebel group, the National Liberation Army (ELN), and drug traffickers.

The president has previously promised to open "spaces for dialogue" with the various protesting sectors, although he has defended the security forces and said they are the main victims of the violence.

The social unrest comes just over a month ahead of the start of the Copa America, jointly hosted by Colombia and Argentina.

But Duque vowed that the Copa America would continue to be jointly hosted by Colombia.

"The Copa will happen ... in the two countries. I think it will be an important message at this time," he said.

The anti-government protests highlight the economic despair faced by many in the wake of the global coronavirus crisis.

In its worst performance in half a century, Colombia's gross domestic product (GDP) shrank 6.8% in 2020, and unemployment stood at 16.8% in March.

Almost half the population lives in poverty, according to official figures.