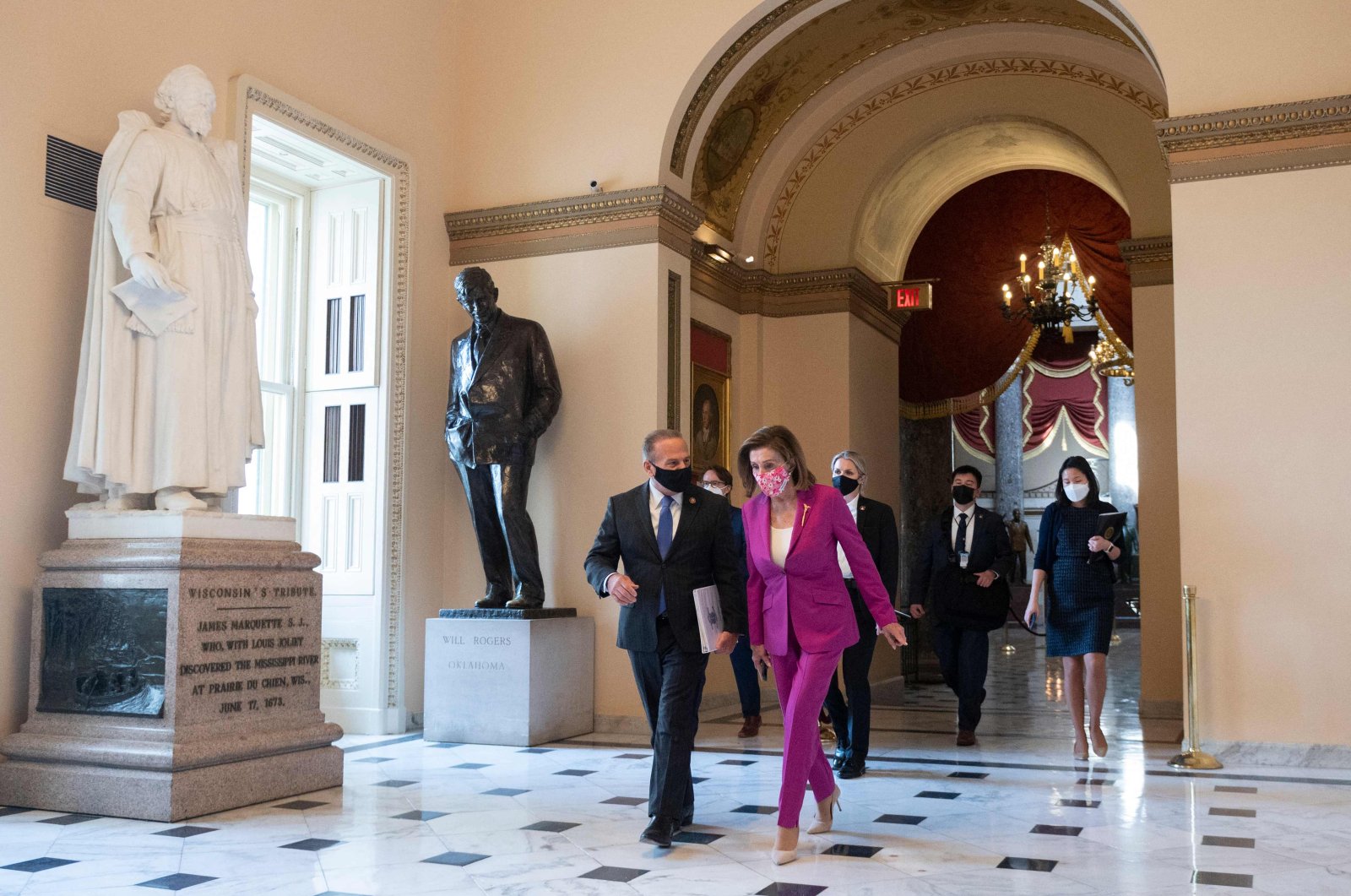 A Congress driven along party lines approved a landmark $1.9 trillion COVID-19 relief bill Wednesday, as President Joe Biden and Democrats claimed a triumph on a bill that marshals the government’s spending might against twin pandemic and economic crises that have upended a nation.

The House gave final congressional approval to the sweeping package by a near party line 220-211 vote precisely seven weeks after Biden entered the White House and four days after the Senate passed the bill. Republicans in both chambers opposed the bill unanimously, characterizing it as bloated, crammed with liberal policies and heedless of signs the crises are easing.

Most noticeable to many Americans are provisions to provide up to $1,400 direct payments this year to most adults and extend $300 per week emergency unemployment benefits into early September. However, the legislation goes far beyond that.

The measure addresses Democrats’ campaign promises and Biden’s top initial priority of easing a one-two punch that first hit the country a year ago. Since then, many Americans have been relegated to hermit-like lifestyles in their homes to avoid a disease that has killed over 525,000 people, and plunged the economy to its deepest depths since the Great Depression.

“Today we have a decision to make of tremendous consequence,” said House Speaker Nancy Pelosi, California's Democratic representative, “a decision that will make a difference for millions of Americans, saving lives and livelihoods.”

For Biden and Democrats, the bill is essentially a canvas on which they’ve painted their core beliefs, that government programs can be a benefit, not a bane, to millions of people and that spending huge sums on such efforts can be a cure, not a curse.

The measure so closely tracks Democrats’ priorities that several rank it with the top achievements of their careers, and despite their slender congressional majorities there was never real suspense over its fate.

They were also empowered by three dynamics, namely their unfettered control of the White House and Congress, polls showing robust support for Biden’s approach and a moment when most voters care little that the national debt is soaring toward a stratospheric $22 trillion.

Neither party seems much troubled by surging red ink, either, except when the other is using it to finance its priorities, be they Democratic spending or GOP tax cuts.

Representative Jared Golden of Maine was the only Democrat to oppose the measure. He said in a written statement that the bill provided hundreds of billions of dollars “in excess of meeting the most urgent needs," and he said that endangered the economic recovery.

Republicans noted that they’ve overwhelmingly supported five previous relief bills that Congress has approved since the pandemic struck a year ago, when divided government under then-President Donald Trump forced the parties to negotiate.

They said this one solely reflected Democratic goals by setting aside money for family planning programs and federal workers who take leave to cope with COVID-19 and failing to require that shuttered schools accepting aid reopen their doors.

“If you’re a member of the swamp, you do pretty well under this bill. But for the American people, it means serious problems immediately on the horizon,” said House Minority Leader Kevin McCarthy, Republican representative from California, referring to the added federal borrowing the measure will force.

A dominant feature of the 628-page bill is initiatives making it one of the biggest federal efforts in years to assist lower- and middle-income families. Included are expanded tax credits over the next year for children, child care and family leave, some of them credits that Democrats have signaled they’d like to make permanent, plus spending for renters, feeding programs and people’s utility bills.

Besides the direct payments and jobless-benefit extension, the measure has hundreds of billions for COVID-19 vaccines and treatments, schools, state and local governments and ailing industries from airlines to concert halls. There is aid for farmers of color, pension systems and student borrowers, and subsidies for consumers buying health insurance and states expanding Medicaid coverage for lower earners.

“Who’s going to help? Do we say this is all survival of the fittest? No,” said House Budget Committee Chairman John Yarmuth. “We rise to the occasion. We deliver.”

Underscoring the bill’s focus, the independent Tax Policy Center said the measure would give almost 70% of its tax breaks this year to households earning $91,000 or less. In contrast, the Trump-era GOP tax bill gave nearly half its 2018 reductions to the top 5% of households earning around $308,000, said the research center, which is run by the liberal-leaning Urban Institute and Brookings Institution.

The measure was approved amid promising though mixed signs of recovery.

Americans are getting vaccinated at increasingly robust rates, though that is tempered by COVID-19 variants and people’s growing impatience with curbing social activities. The economy created an unexpectedly strong 379,000 jobs last month, though there remain 9.5 million fewer than before the pandemic struck.

Republicans said the country will pay a price for the extra spending. “It’s certainly good politics to say, ‘Hey, we’re going to hand you a check for $1,400,” said Representative Tom Rice of South Carolina. “But what they don’t talk about is what this bill costs.”

Yet until November 2022, when control of the Senate and House will be at stake, it will be uncertain whether voters will reward Democrats, punish them for the expenditures or make decisions on other, unforeseen issues.

The bill’s pathway has underscored Democrats’ challenges as they seek to build a legislative record that will persuade voters to support them.

Democrats control the Senate, split 50-50, only because Vice President Kamala Harris gives them the winning vote in tied roll calls. They have just a 10-vote advantage in the House.

That’s almost no wiggle room for a party that ranges from West Virginia Senator Joe Manchin on the conservative side to progressives like New York Representative Alexandria Ocasio-Cortez.

On the relief bill, progressives had to swallow big concessions to solidify moderate support.

The most painful was dropping the House-approved federal minimum-wage increase to $15 hourly by 2025. Moderates also succeeded in trimming the emergency jobless benefits, which in an earlier version were $400 weekly, and phasing out the $1,400 stimulus checks completely for earners at lower levels than originally proposed.

Keeping Democrats united won’t get easier as the party tries advancing the rest of its agenda. There are fault lines within the party over priorities like immigration, health care and taxes.

At some point it seems likely that progressives will draw their own lines in the sand. They are already demanding that the party revisit the minimum-wage boost.