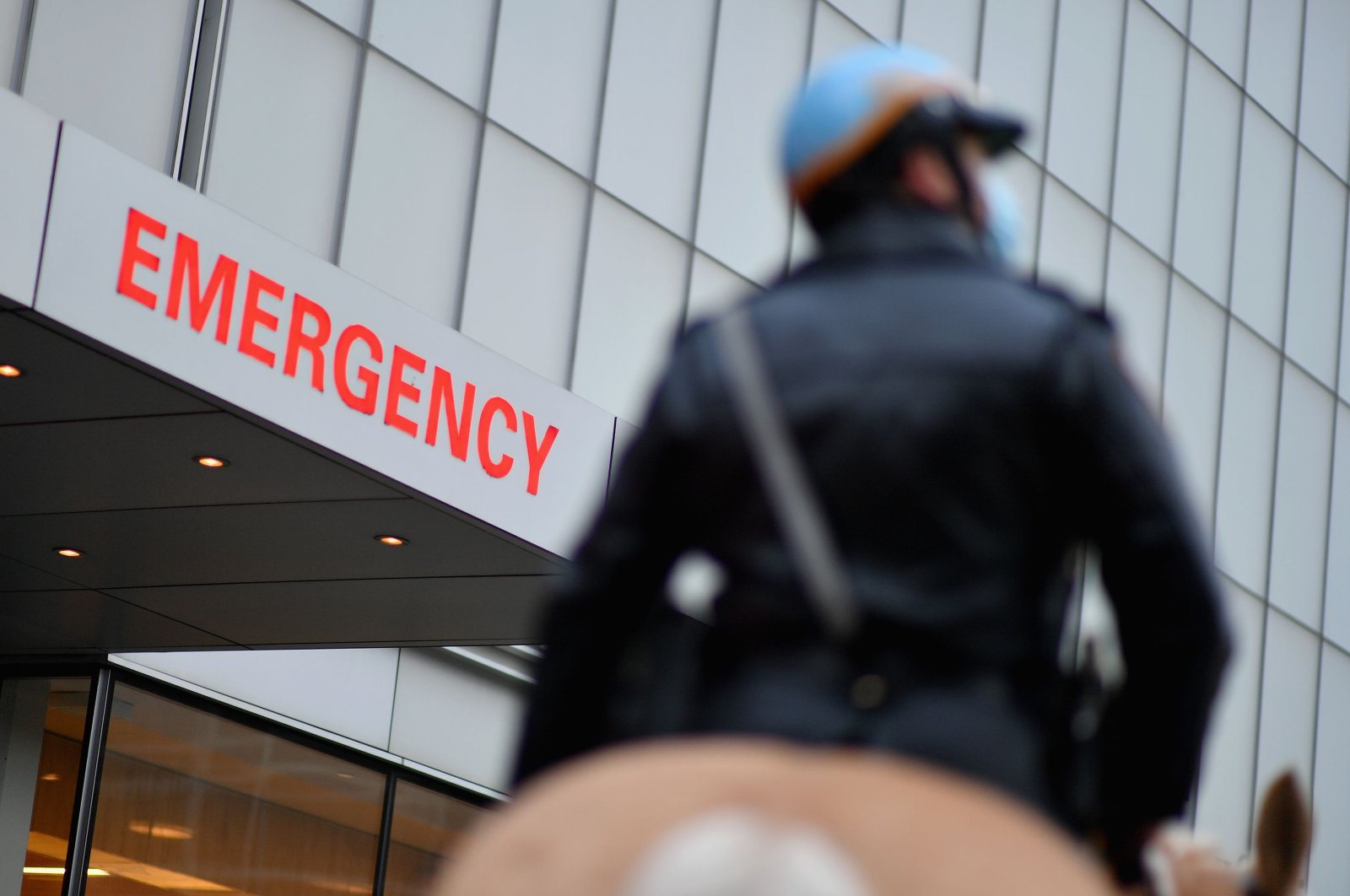 An NYPD officer sits on his horse in front of the emergency room entrance as people applaud to show their gratitude to medical staff and essential workers outside NYU Langone Health hospital, New York City, April 23, 2020. (AFP Photo)
by Associated Press
Apr 24, 2020 2:56 pm

What if the real “invisible enemy” is the enemy from within – America's very own institutions?

When the coronavirus pandemic came from distant lands to the United States, it was met with cascading failures and incompetencies by a system that exists to prepare, protect, prevent and cut citizens a check in a national crisis.

The molecular menace posed by the new coronavirus has shaken the conceit of “American exceptionalism” like nothing big enough to see with your own eyes.

A nation with unmatched power, brazen ambition and aspirations through the arc of history to be humanity’s “shining city upon a hill” cannot come up with enough simple cotton swabs despite the wartime manufacturing and supply powers assumed by President Donald Trump.

The crisis turned doctors in the iconic American shining city, New York, into beggars with hands outstretched for ponchos because they couldn’t get proper medical gowns. “Rain ponchos!” laments tech entrepreneur Marc Andreessen. “In 2020! In America!”

It’s turned a Massachusetts hospital executive into an under-the-radar road warrior, working up a deal through a friend of a friend of an employee who heard about a warehouse more than five hours away with masks. Two tractor-trailers disguised as grocery trucks picked them up, dodged interference from Homeland Security and took separate routes back in case one load got intercepted on highways through the northeast “pandemic alley.”

“Did I foresee, as a health system leader working in a rich, highly developed country with state-of-the-art science and technology and incredible talent, that my organization would ever be faced with such a set of circumstances?” asked Dr. Andrew W. Artenstein of Baystate Health, who was on hand at the warehouse to help score the equipment. “Of course not.”

But, he said, “the cavalry does not appear to be coming.”

At the time of greatest need, the country with the world’s most expensive health care system doesn’t want you using it if you’re sick but not sick enough or not sick the right way.

The patchwork private-public health care system consumes 17% of the economy, unparalleled globally. But it wants you to stay home with your COVID-19 unless you are among the minority at risk of death from suffocation or complications. It wants you to heal from anything you can without a doctor’s touch and put off surgeries of all kinds if they can wait.

In the pandemic’s viral madhouse, the U.S. possesses jewels of medical exceptionalism that have long been the envy of the world, like the federal Centers for Disease Control and Prevention and the National Institutes of Health.

But where are the results?

For effective diagnostic testing, crucial in an infectious outbreak, look abroad. To the United Arab Emirates, or Germany, or New Zealand, which jumped to test the masses before many were known to be sick.

Or to South Korean exceptionalism, tapped by Maryland’s Republican governor, Larry Hogan, who accepted a planeload of 500,000 testing kits from Seoul to make up for the U.S. shortfall. The aid was dubbed Operation Enduring Friendship and annoyed Trump, the “America First” president.

“This monumental failure of institutional effectiveness will reverberate for the rest of the decade,” Andreessen, a tech investor best known for the Netscape browser in the 1990s, said in his company newsletter.

Yet Trump uses his daily White House briefings to claim success and talk about his poll numbers, TV ratings, favorite theories about science and the praise he gets from governors, who may be at risk of seeing their states intentionally shortchanged by Washington if they don’t say something nice about him.

“A lot of people love Trump, right?” Trump asked himself at the briefing Monday.

Connecticut Gov. Ned Lamont, a Democrat, found something nice to say about the administration this past week: It’s relaxing some regulations. “They’ve now said you can come up with your own swab,” he said. “One good thing is, the federal government is getting out of the way.”

That is one iteration of American exceptionalism now – a national government responding to a national crisis by getting out of the way.

That's what plunged Dr. Artenstein into his great mask caper.