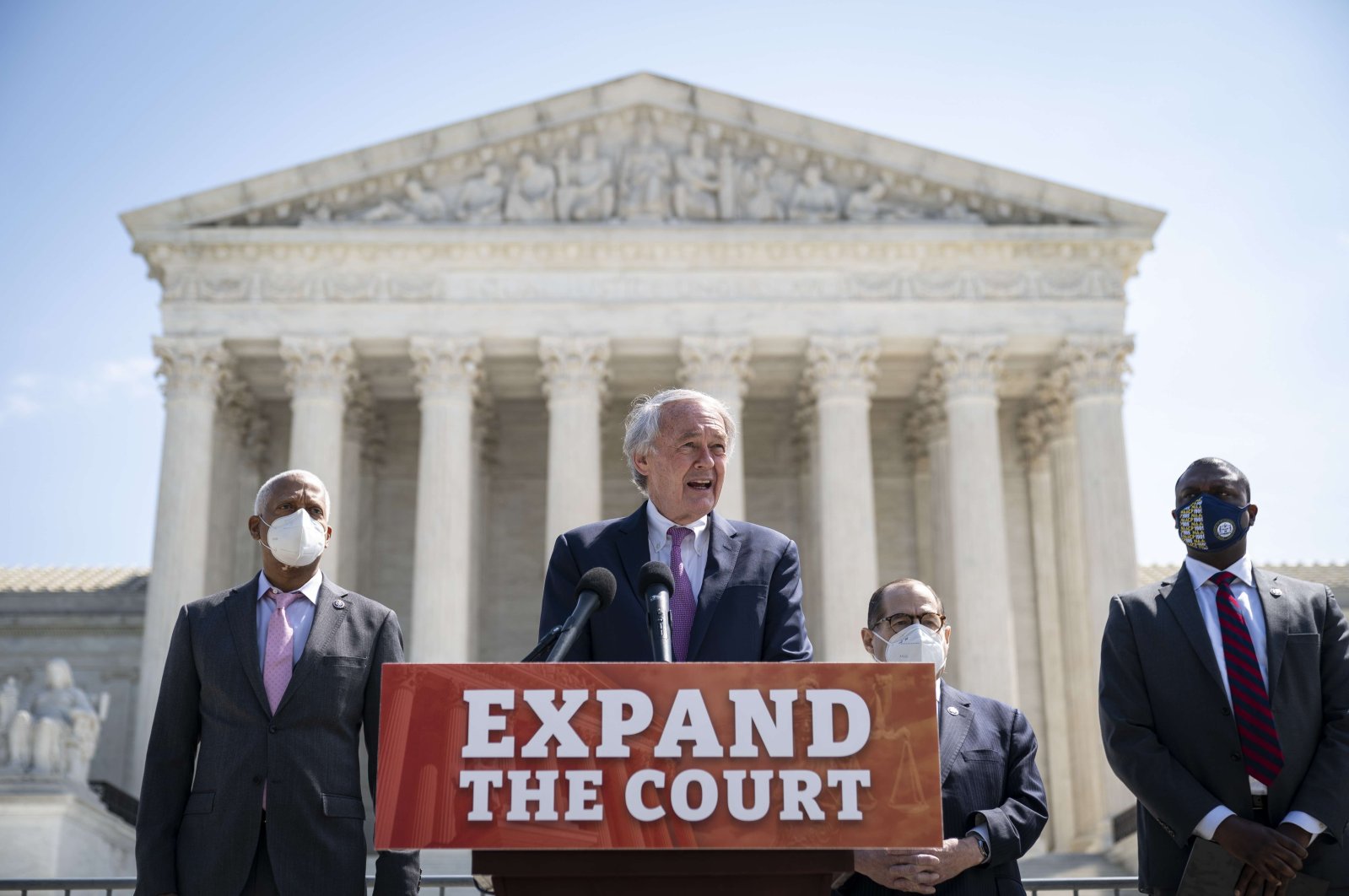 Republicans are making accusations of a power grab after Congressional Democrats proposed legislation to bring the Supreme Court to 13 from its current nine judges on Thursday.

The surprise move appears to be an effort by the party's progressive wing to pressure Biden on the explosive issue, less than one week after the president announced he was forming a commission to study Supreme Court reforms including the question of expanding its bench.

Several liberal Democrats have said such expansion is necessary after Donald Trump gave the bench a firm conservative majority by getting three of his picks onto the Supreme Court during his presidency, including one just eight days before the 2020 election.

"Our democracy is under assault, and the Supreme Court has dealt the sharpest blows," Congressman Mondaire Jones said in a tweet announcing he and three other Democrats, including House Judiciary Committee Chairman Jerrold Nadler, were introducing a bill to add four seats to the bench.

"To restore power to the people, we must #ExpandTheCourt."

The move appears doomed to fail – at least for now.

Asked whether she supports the bill, House Speaker Nancy Pelosi simply told reporters, "No," adding she had no plans to bring it to the floor for a vote.

Biden himself has been hesitant about the issue, and last year during the campaign he said he did not support expanding the court.

But as president, he has agreed to consider it. Biden last week signed an executive order creating a bipartisan commission of legal and judicial scholars, former administration officials and former federal judges to weigh the highly-charged issue of reforming the body.

But the new legislation has raised eyebrows across the political spectrum in Washington, where expanding the court – even with a commission's study, would be a very heavy lift in such a deeply divided Congress.

"Packing the court goes against everything we believe as Americans," top House Republican Kevin McCarthy said on Twitter.

"But make no mistake: this is about power and control. Democrats want to dismantle our institutions, including the courts, to enact their socialist agenda."

The issue has been a political football ever since the controversial confirmation of conservative judge Amy Coney Barrett to the Supreme Court following the September 2020 death of Ruth Bader Ginsburg, a liberal icon.

The confirmation process triggered outrage from many Democrats, who pointed to the U.S. Senate Republican leadership's refusal to hold hearings for Obama's Supreme Court pick in early 2016, much less a vote, on grounds that it was too close to that year's November presidential election.

The leader of that Senate roadblock five years ago, Mitch McConnell, remains the chamber's top Republican, and he fired a warning shot Thursday against the latest Democratic effort.

"The far left cannot even wait for the fake theatrics of (the Biden commission's) fake study to play out," McConnell told the Senate.

"They're introducing a bill to add four new seats to the Supreme Court so that Democrats can pack the court, destroy its legitimacy and guarantee the rulings that liberals want."

Congress grew and shrank the size of the court several times in the mid-19th century, including in 1863 when Republicans expanded the court to 10 seats to give president Abraham Lincoln an appointment.

It was reduced to seven a few years later, but in 1869 it was expanded back to nine, where it has remained.

Several Republicans have warned that expanding the Supreme Court now would erode public trust in the institution and effectively destroy its independence.