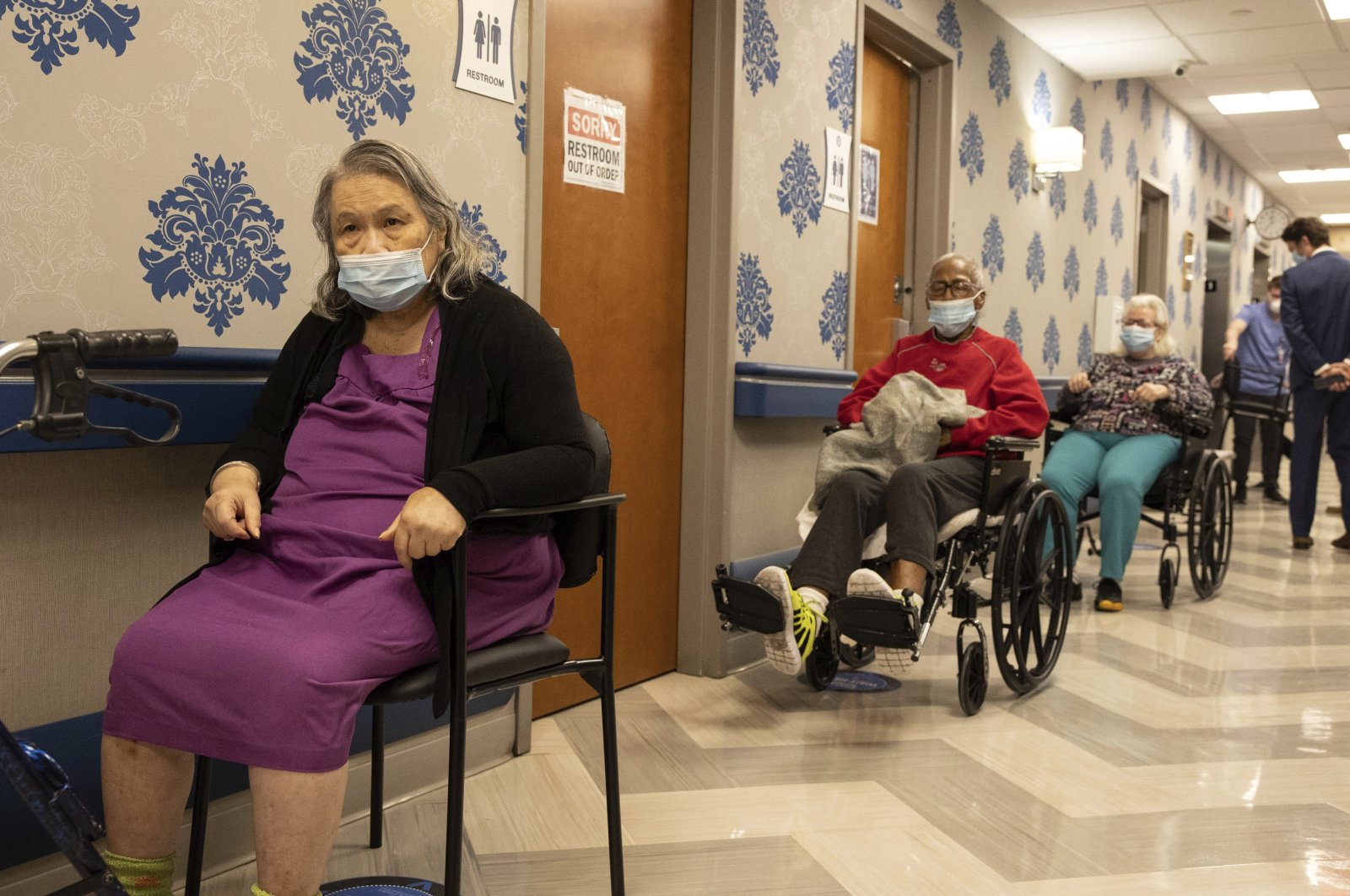 In this Jan. 15, 2021, file photo, nursing home residents wait in line for the COVID-19 vaccine at the Harlem Center for Nursing and Rehabilitation, a nursing home facility, in the Harlem neighborhood of New York City, U.S. (AP photo)
by Associated Press Mar 28, 2021 12:06 pm
RECOMMENDED

Vaccines have begun saving lives in New York's nursing homes, but they have yet to cure another crisis caused by the pandemic: loneliness.

Persistently high rates of COVID-19 have left the majority of the state's nursing homes off limits to visitors, despite relaxed guidance meant to help reopen them.

Until this week, under state and federal rules, they could admit visitors only if they had no new infections among either patients or staff for 14 days.

That mark proved too hard for most to reach. A little more than half of the state’s 616 nursing homes were ineligible for indoor visits in mid-March, according to an Associated Press (AP) analysis of data from the U.S. Centers for Medicaid and Medicare. That’s the highest percentage of any state.

New York updated its visitation rules Thursday in a way that will now allow visits to resume under certain conditions, even if a resident or staffer has recently tested positive. But that relaxed standard might not clear the way for visitation in many homes having trouble keeping the virus out.

The lack of visits has frustrated people like Debbie Barbano, who has been able to see her 69-year-old mother at a central New York nursing home only through a window.

"When this hit last year, it was like a bullet to your chest,” Barbano said. "She didn’t understand why I wasn’t coming. It was like I was abandoning her.”

Under New York’s new guidelines, homes would still have to halt visits after any resident or staffer tested positive, but they could potentially resume for some patients if a thorough round of further testing revealed the outbreak was confined to just one part of the facility.

It’s unclear, though, exactly how that guidance will be applied and whether the change would mostly affect large homes with multiple buildings, floors or units with little mingling of staff or residents between units.

Decreased infections nationwide have allowed 80% of nursing homes nationally eligible to open doors by mid-March, including the vast majority of nearly 1,200 facilities in California.

"Nursing homes have finally started to see the light at the end of the tunnel,” said Christopher Laxton, executive director of the Society for Post-Acute and Long-Term Care Medicine, whose group is seeking clarity on the new rules from the U.S. Centers for Medicare and Medicaid Services. "But we’re not out of the tunnel. We’re seeing the end of it.”

Meanwhile, some relatives are fighting to see loved ones.

Family members in New York and nationwide who have organized on Facebook groups say their loved ones are losing weight, falling, declining cognitively, dying alone and suffering from lack of attention. Federal and state guidance allows compassionate care visits, but families in New York and elsewhere say nursing homes don’t always allow them.

Laura Corridi, a 56-year-old senior programmer analyst in Hamlin, New York, has driven an hour and a half on the weekends to stand outside her 93-year-old mother’s nursing home and shout to her through a window throughout the past year.

"She gets very upset sometimes,” Corridi said. "She’ll say: ‘It’s cold out. You can’t be out there.’ She starts to cry, ‘Why don’t they let you in?’ She doesn’t want me standing out in the cold.”

State lawmakers passed a bill this year that would allow nursing home residents to designate as many as two caregivers who can visit them even if general visitation isn’t allowed, as long as they get tested and follow other infection protocols.

Gov. Andrew Cuomo hasn’t yet signed the legislation, however, and his office didn’t respond to a request for comment on whether he intended to do so. His counsel Beth Garvey told reporters Monday that the administration wants to make sure the bill is in line with federal guidelines.

Cuomo has taken political heat over recent revelations that his administration did not disclose the full number of nursing home residents who died during the pandemic's peak.

New York is one of at least 17 states where lawmakers are considering similar legislation, according to the AP review.

But many New Yorkers with relatives in nursing homes say their loved ones can’t wait for companionship.

"They’re dying now,” Karen Costner, of Greece, New York, said. "My mother’s losing her will to live every week. And I need to get in there now.”

"Too many elderly have been isolated, lonely, frightened,” said Arthur Caplan, director of the division of medical ethics at the New York University Grossman School of Medicine. "Many people with cognitive disabilities have been frightened with seeing everybody in masks and not seeing familiar people.”

But Caplan, whose mother died at a Massachusetts nursing home last year, said he still worries not enough is being done to protect vulnerable residents. Staffers should be required to be vaccinated, and visitors must be tested, he urged.

"If the staff isn’t vaccinated I think people who have family members in there should be screaming for them to get vaccinated,” Caplan said.