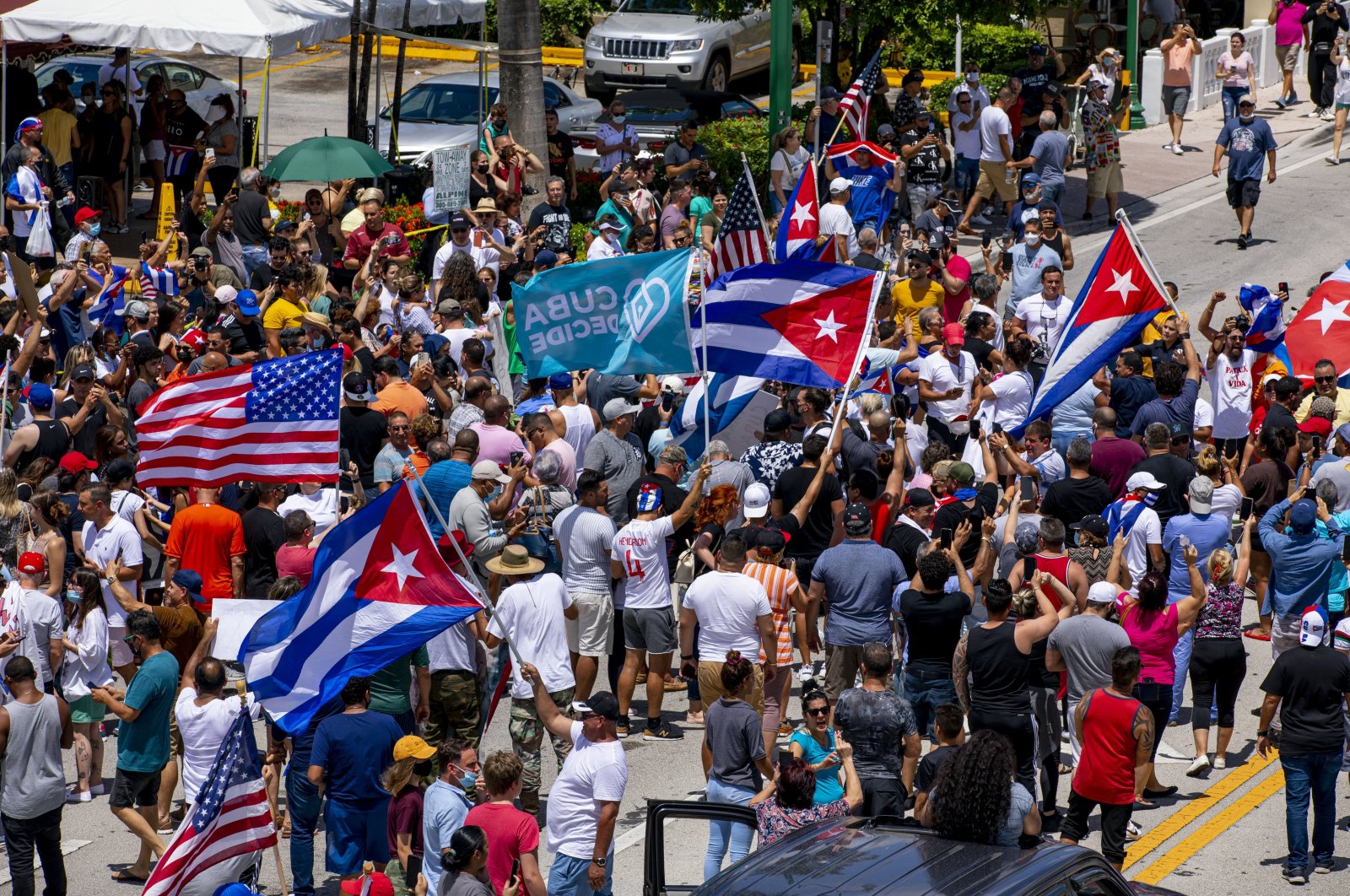 People march in the streets and wave Cuban flags during a protest in solidarity with thousands of Cubans who took to the streets in various locations in Cuba, in one of the largest protests to take place on the island, at Versailles Cuban restaurant off 8th Street in the Little Havana neighborhood of Miami, U.S., July 11, 2021. (AP Photo)
by French Press Agency - AFP Jul 14, 2021 8:55 am
RECOMMENDED

Cuba confirmed Tuesday that one protester died and more than 100 others, including independent journalists and dissidents, have been detained during rare anti-government demonstrations in Cuba, with some remaining in custody, according to observers and activists.

A 36-year-old man identified by the state news agency as Diubis Laurencio Tejeda died during an anti-government protest on the outskirts of Havana on Monday, the interior ministry said.

The ministry said it "mourns" his death while the news agency said he had taken part in "disturbances."

Relatives and friends of those detained during and after Sunday's historic demonstrations engaged in a desperate search on Tuesday for news on their whereabouts.

"They took him from the house handcuffed and beaten, without a shirt, without a mask," said a 50-year-old woman who did not wish to give her name, enquiring about her 21-year-old son at a police station in the capital. "They took many from the neighborhood, young and old," she said, before leaving empty-handed.

Cuba's San Isidro free speech protest movement published late on Monday a list on Twitter of 144 people held or reported as disappeared after thousands of Cubans took to the streets in dozens of cities and towns in a spontaneous outburst of public anger.

Droves of demonstrators chanted "Down with the dictatorship" in protests dispersed by police in some 40 different locations Sunday. About 100 protesters again gathered in Havana Monday evening, shouting "Down with communism."

The rallies were unlike any seen since the Cuba revolution. They came as the country endures its worst economic crisis in 30 years, with chronic shortages of electricity, food and medicine and a recent worsening of the coronavirus pandemic.

But Cuba's foreign minister Bruno Rodriguez denied on Tuesday there had been a "social outbreak" on Sunday, insisting that the people still support "the revolution and their government."

Havana blamed the show of discontent on the United States pursuing a "policy of economic suffocation to provoke social unrest in the country."

Cuba has been under U.S. sanctions since 1962. But Washington pointed the finger at "decades of repression" in the one-party communist state.

Cuba's Catholic church called for "understanding" in a statement published on the Bishops Conference website, adding that "the people have the right to express their needs, desires and hopes."

The bishops also criticized the government's "immobility that contributes to giving continuity to the problems, without solving them."

Many Cubans were looking for loved ones.

"They took my daughter yesterday (Monday) and I have no news of her," said a woman at a Havana police station.

A young man said his brother, 25, was taken from a neighbor's house. "They gave him a tremendous blow, unjustly, and took him away," he said.

A police official told worried family members that those arrested were taken to different detention centers, without providing details of who went where.

Julie Chung, acting assistant secretary in the U.S. State Department's Bureau for Western Hemisphere affairs, called in a tweet Monday for the "immediate release" of the detainees.

"Violence and detentions of Cuban protesters & disappearances of independent activists ... remind us that Cubans pay dearly for freedom and dignity," she said.

Granma, the official newspaper of Cuba's governing Communist Party, said Tuesday that President Miguel Diaz-Canel had met with his retired predecessor Raul Castro and the rest of the communist party politburo on Sunday to discuss the protests.

They "analyzed the provocations orchestrated by counterrevolutionary elements, organized and financed from the United States for destabilization purposes," Granma said.

Mobile internet was down in Cuba for much of Sunday and on Monday the authorities cut access to major social media platforms, according to London-based group NetBlocks.

The United States on Tuesday urged Cuba to end the internet restrictions and demonstrate "respect for the voice of the people by opening all means of communication, both online and offline."

Among those arrested was theater director Yunior Garcia, a leader of the 27N movement which was born after a much smaller protest by members of the art community on November 27 last year to demand free speech. Garcia said on Facebook that he and a group of friends were beaten "and forcefully dragged and thrown into a truck."

"We were treated like rubbish," he said, adding they were taken to a detention center in Havana where they saw "dozens of young people" arrive. He was released on Monday afternoon.

Also arrested on Monday was Camila Acosta, a Cuban correspondent for the Spanish newspaper ABC, its foreign editor said. Spain's foreign ministry on Tuesday urged the Cuban authorities to respect the right to protest and demanded that Cuba "immediately" release Acosta. The last major protests, and the first since the revolution that brought Fidel Castro to power in 1959, were in 1994. Those were also against economic hardship but were limited to the capital and quickly put down by police.