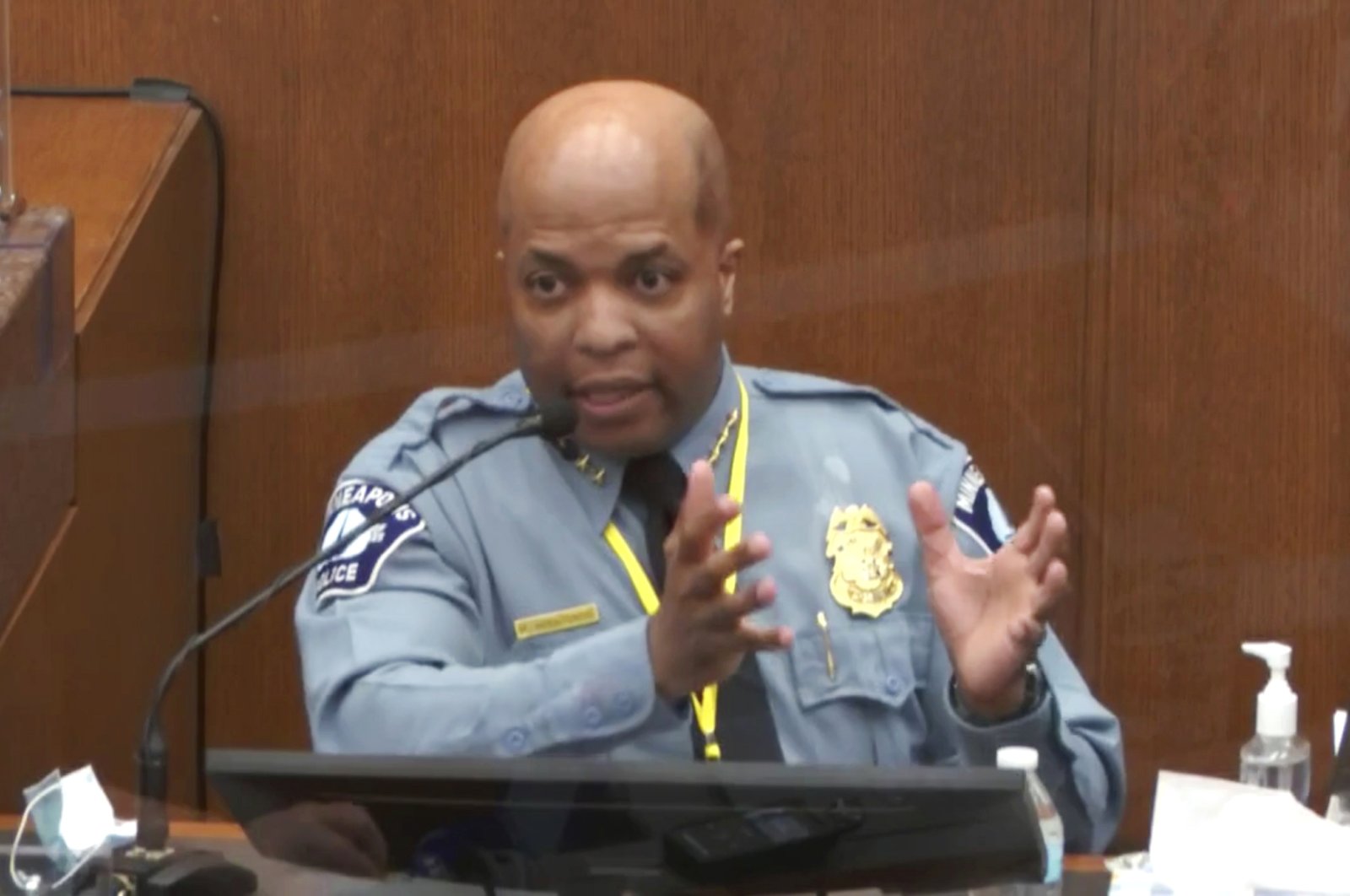 Continuing to kneel on Floyd’s neck once his hands were cuffed behind his back and lying on his stomach was “in no way, shape or form” part of department policy or training, “and it is certainly not part of our ethics or our values,” police chief Medaria Arradondo said Monday on day six of Chauvin’s murder trial.

Arradondo, the city’s first black chief, fired Chauvin and three other officers the day after Floyd’s death last May, and in June called it “murder.”

While police have long been accused of closing ranks to protect fellow members of the force charged with wrongdoing – the “blue wall of silence,” as it’s known – some of the most experienced officers in the Minneapolis department have taken the stand to openly condemn Chauvin’s treatment of Floyd.

As jurors watched in rapt attention and scribbled notes, Arradondo testified not only that Chauvin – a 19-year veteran of the force – should have let Floyd up sooner, but that the pressure on Floyd’s neck did not appear to be light to moderate, as called for under the department’s neck-restraint policy; that Chauvin failed in his duty to render first aid before the ambulance arrived and that he violated policy requiring officers to de-escalate tense situations with no or minimal force if they can.

Arradondo’s testimony came after the emergency room doctor who pronounced Floyd dead said he theorized at the time that Floyd’s heart most likely stopped because of a lack of oxygen.

Dr. Bradford Langenfeld, who was a senior resident on duty that night at Hennepin County Medical Center and tried to resuscitate Floyd, took the stand as prosecutors sought to establish that it was Chauvin’s knee on the black man’s neck that killed him.

Langenfeld said Floyd’s heart had stopped by the time he arrived at the hospital. The doctor said that he was not told of any efforts at the scene by bystanders or police to resuscitate Floyd but that paramedics told him they had tried for about 30 minutes and that he tried for another 30 minutes.

Under questioning by prosecutors, Langenfeld said that based on the information he had, it was “more likely than the other possibilities” that Floyd’s cardiac arrest – the stopping of his heart – was caused by asphyxia or insufficient oxygen.

Chauvin, 45, is charged with murder and manslaughter in Floyd’s death on May 25. The white officer is accused of pressing his knee into the 46-year-old man’s neck for 9 minutes, 29 seconds, outside a corner market where Floyd had been arrested on suspicion of trying to pass a counterfeit $20 bill for a pack of cigarettes.

Floyd’s treatment by police was captured on a widely seen bystander video that sparked protests around the U.S. that descended into violence in some cases.

The defense has argued that Chauvin did what he was trained to do and that Floyd’s use of illegal drugs and his underlying health conditions caused his death.

Nelson, Chauvin’s attorney, asked Langenfeld whether some drugs can cause hypoxia or insufficient oxygen. The doctor acknowledged that fentanyl and methamphetamine, both of which were found in Floyd’s body, can do so.

The county medical examiner’s office ultimately classified Floyd’s death a homicide – a death caused by someone else.

The report said Floyd died of “cardiopulmonary arrest, complicating law enforcement subdual, restraint, and neck compression.” A summary report listed fentanyl intoxication and recent methamphetamine use under “other significant conditions” but not under “cause of death.”

Prosecutor Steve Schleicher noted that while some people may become more dangerous under the influence of drugs or alcohol, some may actually be “more vulnerable.” Arradondo agreed and acknowledged that this must also be taken into consideration when officers decide to use force.

Before he was pinned to the ground, a frantic Floyd struggled with police who were trying to put him in a squad car, saying he was claustrophobic.

Arradondo said officers are trained in basic first aid, including chest compressions, and department policy requires them to request medical assistance and provide necessary aid as soon as possible before paramedics arrive.

“We absolutely have a duty to render that,” he said.

Officers kept restraining Floyd – with Chauvin kneeling on his neck, another kneeling on Floyd’s back and a third holding his feet – until the ambulance got there, even after he became unresponsive, according to testimony and video footage.

The officers also rebuffed offers of help from an off-duty Minneapolis firefighter who wanted to administer aid or tell officers how to do it.

Langenfeld testified that for people who go into cardiac arrest, there is an approximately 10% to 15% decrease in survival for every minute that CPR is not administered.

Nelson noted on cross-examination that department policies direct officers to do what is reasonable in a given situation. He asked whether officers need to take the actions of a crowd into account, and Arradondo agreed. Nelson has suggested that onlookers – many of whom were shouting at Chauvin – might have affected officers’ response.

But prosecutors quickly got Arradondo to note that the clip played by Nelson depicted only a few seconds before Floyd was moved onto a stretcher.

She said Chauvin, whom she’s known for about 20 years, received annual training in defensive tactics and use of force and would have been trained to use one or two arms – not his knee – in a neck restraint.

“I don’t know what kind of improvised position that is,” she said, after being shown a photo of Chauvin with his knee on Floyd’s neck.

She said Chauvin also was a field-training officer, receiving additional training so he would know what prospective officers were learning in the academy.