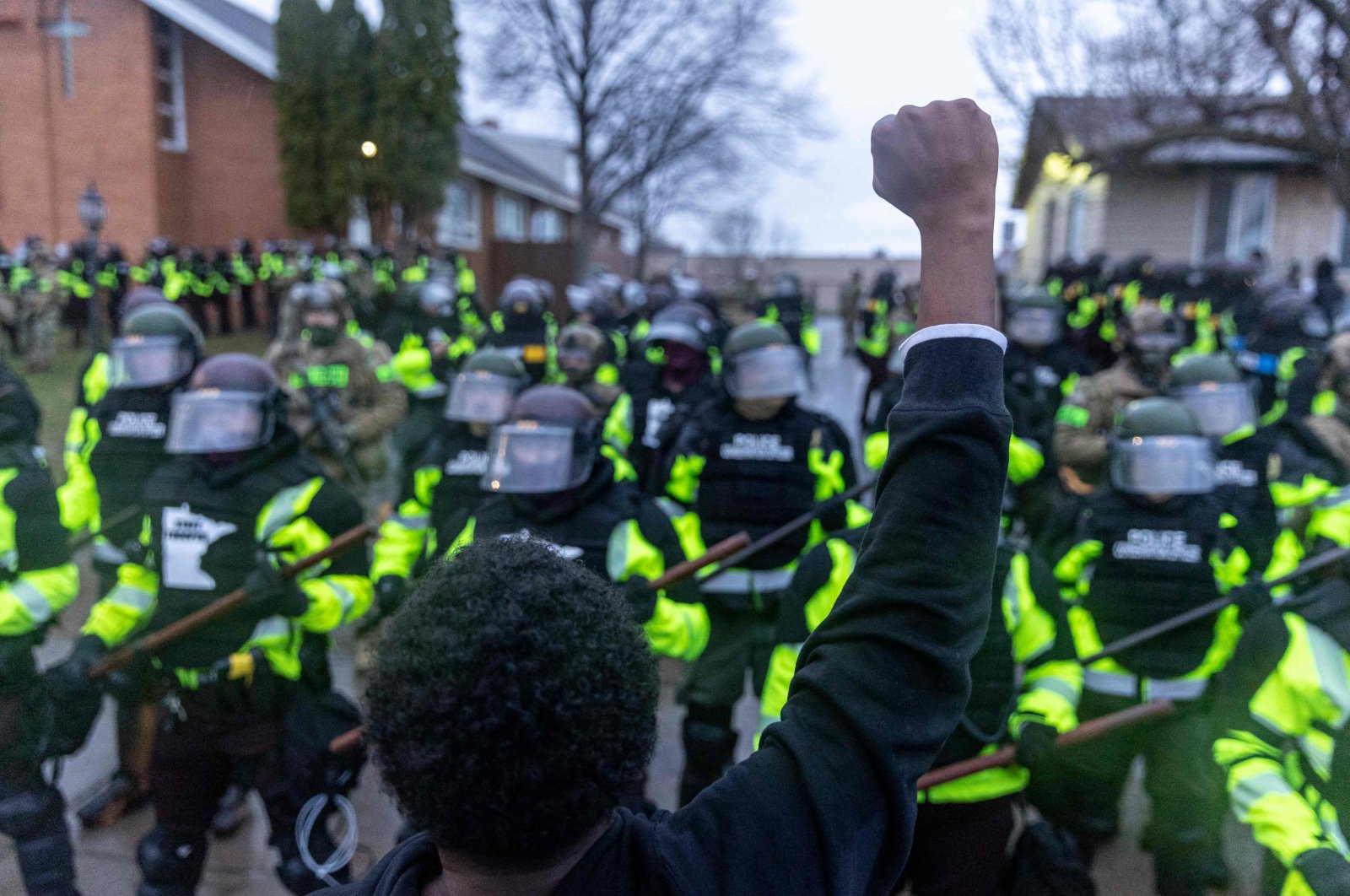 A man raises his fist as he faces the Minnesota State Troopers standing guard outside the Brooklyn Center Police Station after a police officer shot and killed 20-year-old Daunte Wright during a traffic stop in Brooklyn Center, Minneapolis, Minnesota, April 12, 2021. (AFP Photo)
by French Press Agency - AFP Apr 13, 2021 11:45 am
RECOMMENDED

Protesters were not simmering down in Minneapolis Tuesday despite a curfew implemented after a police officer said she mistakenly shot dead a black man during a traffic stop, confusing her handgun with her taser.

Shortly before 9:00 p.m. local time (2 a.m. GMT Tuesday), nearly two hours after the curfew went into effect, dozens of protesters continued to wave signs and chant slogans in front of the police station in Brooklyn Center, where Sunday's killing occurred.

Demonstrators taunted police through newly-erected wire fencing around the station and carried signs saying "Jail all racist killer cops," "Am I next?" and "No justice, no peace."

Police fired tear gas at the protesters several times and ordered them to disperse. This was the second consecutive night of protests after 20-year-old Daunte Wright was shot dead by police while driving with his girlfriend.

In police body camera video released earlier Monday in Brooklyn Center, an officer shouts "Taser! Taser! Taser!" but then instead fires a gun at the victim.

"The officer drew their handgun instead of their taser," said Brooklyn Center police chief Tim Gannon. Gannon said it was his belief that the officer, now on leave pending an investigation, "had the intention to deploy their taser but instead shot Mr. Wright with a single bullet."

"This was an accidental discharge that resulted in the tragic death of Mr. Wright," Gannon said. "There is nothing I can say to lessen the pain of Mr. Wright's family."

Wright's killing sparked protests overnight in Brooklyn Center and the looting of a shopping mall, and authorities in Minneapolis and surrounding suburbs including Brooklyn Center announced a curfew from 7:00 pm Monday until 6:00 a.m. Tuesday.

In the bodycam footage, police officers are seen pulling Wright out of his car after stopping him for a traffic violation and discovering he had an outstanding warrant. When officers attempt to handcuff Wright, he scuffles with them and gets back in the car.

A female police officer shouts, "I'll tase you" and then "Taser! Taser! Taser!" – standard police procedure before an officer fires one of the stun guns. "Holy shit, I shot him," the officer says as Wright, fatally wounded, drives off. He crashed his car a few blocks away. How the officer mistook her gun for a taser was unclear.

Gannon said police are trained to place handguns "on our dominant side, and our taser on our weak side." Minnesota's Bureau of Criminal Apprehension (BCA) identified the officer late Monday as Kim Potter, a 26-year veteran of the police force.

President Joe Biden called the killing "tragic," but warned against any potential violent unrest. "I think we have to wait and see what the investigation shows," Biden said. "In the meantime, I want to make it clear again: there is absolutely no justification, none, for looting," he added. "Peaceful protests – understandable."

The protests overnight prompted the defense attorney for former officer Derek Chauvin, who is facing murder and manslaughter charges for George Floyd's death, to ask the judge presiding over the high-profile case to sequester the jury.

Chauvin is facing murder and manslaughter charges for his role in Floyd's death on May 25, 2020, which occurred during his arrest for allegedly passing a fake $20 bill.

The 45-year-old Chauvin, who is white, was seen in a video taken by a bystander kneeling on Floyd's neck for more than nine minutes as the handcuffed 46-year-old black man complained repeatedly that he could not breathe.

The video touched off protests against racial injustice and police brutality in the United States and around the world. Brooklyn Center, where Wright was shot, is a northwest suburb of Minneapolis located not far from the heavily guarded Hennepin County Government Center where Chauvin is on trial.

Officers fired tear gas and flash bangs to disperse a crowd of hundreds who gathered outside a police station in Brooklyn Center after Wright was shot. National Guard troops were deployed.

"We are in pain right now, and we recognize that this couldn't have happened at a worse time," Brooklyn Center Mayor Mike Elliott said.

The Minnesota Twins announced they were postponing their Monday baseball game against the Boston Red Sox "out of respect for the tragic events that occurred yesterday in Brooklyn Center."

The U.S. professional basketball and hockey leagues also postponed Monday games involving Minnesota teams. Prosecutors are seeking to prove Floyd's death was due to asphyxiation by the officers conducting the arrest and have called several medical experts to bolster their case. Chauvin's attorney claims Floyd's death was due to his consumption of the illegal drugs fentanyl and methamphetamine and underlying health conditions.

Prominent cardiologist Jonathan Rich testified Monday that Floyd's death was caused by "low oxygen levels" that were "induced by the prone restraint and positional asphyxiation that he was subjected to." "I see no evidence at all that a fentanyl overdose caused Mr. Floyd's death," Rich said.