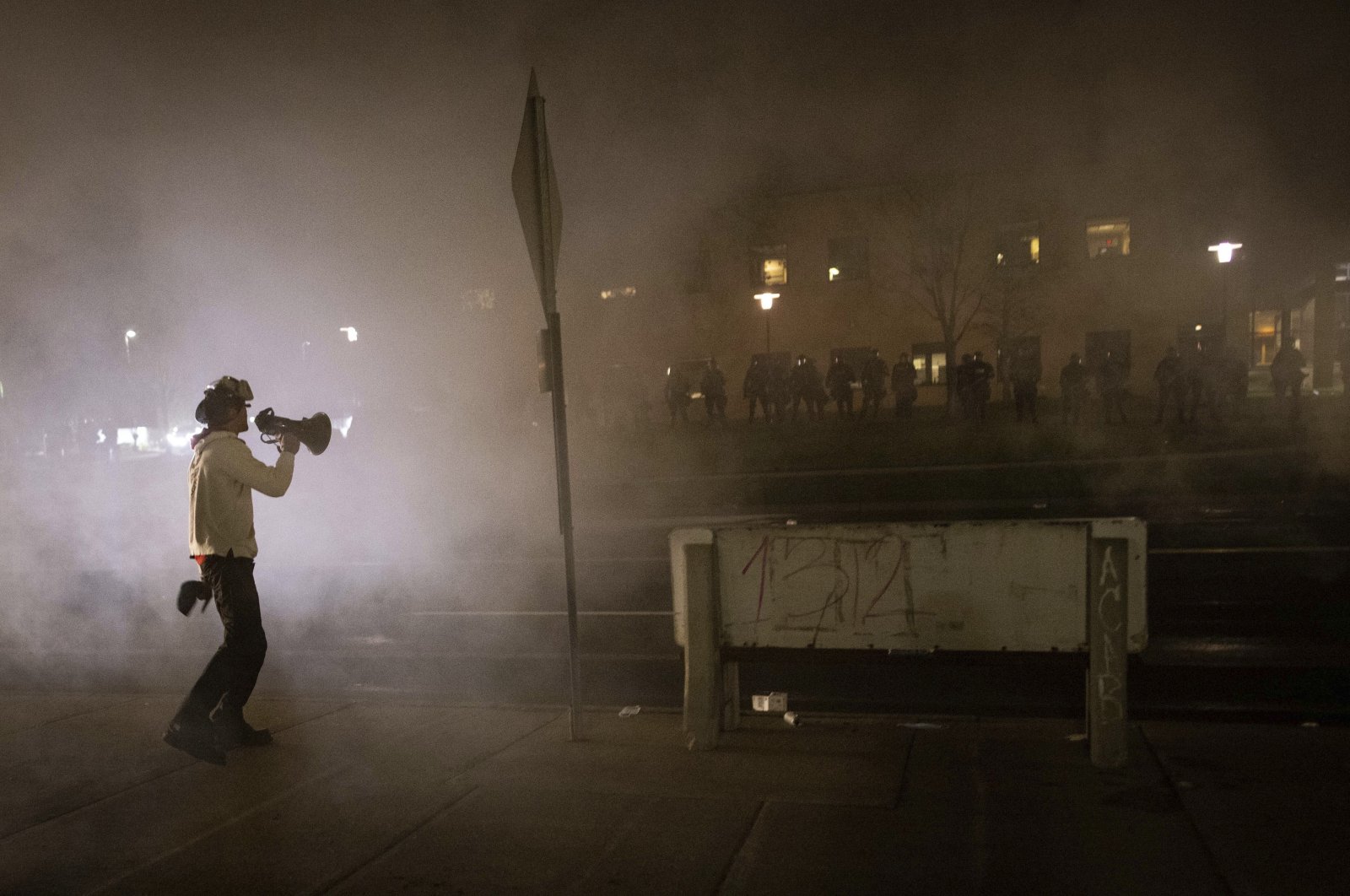 A protester confronts police in front of the Brooklyn Center Police station in Brooklyn Center, Minnesota, U.S., April 11, 2021. (Photo by Christian Monterrosa via AP)
by DAILY SABAH WITH AGENCIES Apr 12, 2021 10:22 am

The shooting of a black man by police at a traffic stop in Brooklyn Center, just north of Minneapolis led to a fresh wave of protests last night, less than a year after white police officer Derek Chauvin killed George Floyd in the same state, triggering protests across the globe

Fresh protests erupted Sunday night in a suburb of Minneapolis after United States police shot a young black man at a traffic stop, at the same time the trial of a former police officer is currently ongoing for the murder of George Floyd, which has drawn huge reaction in the U.S. and from the rest of the world.

As angry crowds swelled into the hundreds outside the Brooklyn Center Police Department building on Sunday night, officers in riot gear fired rubber bullets and lobbed flash-bang grenades at protesters and let off clouds of chemical irritants.

The man shot by police was identified by relatives and Minnesota Governor Tim Walz as Daunte Wright. Walz said in a statement that he was monitoring the unrest in Brooklyn Center, a suburb of Minneapolis, as "our state mourns another life of a black man taken by law enforcement."

Late Sunday, a group of about 100 to 200 protesters gathered around the Brooklyn Center police headquarters and threw projectiles, including rocks, at the police department, Commissioner John Harrington of the Minnesota Department of Public Safety said in a livestreamed news briefing. The group was later dispersed. Another pocket of protesters broke into about 20 businesses at a regional shopping center, with some businesses looted, according to the police and local media reports.

The mother of 20-year-old Wright told a crowd earlier Sunday evening that he called her to say he had been pulled over by police for having air fresheners dangling from his rear-view mirror, illegal in Minnesota, media reported. Katie Wright said she heard officers tell her son to put his phone down and then one of the officers ended the call. Soon after, her son's girlfriend told her he had been shot.

In a statement, Brooklyn Center police said officers pulled over a man for a traffic violation just before 2 p.m. and found he had an outstanding arrest warrant. As police tried to arrest him, he got back in the car. One officer shot the man, who was not identified in the statement. The man drove several blocks before striking another vehicle and dying at the scene. Police say both officers' body cameras were recording during the incident. The state's Bureau of Criminal Apprehension said it was investigating the shooting.

The Minnesota branch of the American Civil Liberties Union (ACLU) said another independent agency should investigate, and demanded the immediate release of any videos of the shooting. The group said it had "deep concerns that police here appear to have used dangling air fresheners as an excuse for making a pretextual stop, something police do all too often to target black people."

“The warrant appears to be for a non-felony," it said, calling for a “transparent and independent investigation by an outside agency other than the Brooklyn Center Police”. The ACLU also demanded for the “quick release of any body-cam footage” and “the naming of all officers and agencies involved.”

Near the site of the shooting, protesters yelled angrily at a line of police in riot gear holding long batons. Some protesters vandalized two police vehicles, pelting them with stones and jumping on them. Police fired rubber bullets, hitting at least two in the crowd and leaving at least one man bleeding from the head, a Reuters witness said, before crowds marched to the police department building. After about an hour, the police presence eased, and the crowd lit candles and wrote messages such as "Justice for Daunte Wright" in chalk on the street. Brooklyn Center Mayor Mike Elliott called the shooting "tragic."

"We are asking the protesters to continue to be peaceful and that peaceful protesters are not dealt with force," he wrote on Twitter. A curfew was imposed in Brooklyn Center until 6 a.m. Monday (11 a.m. GMT), Elliott said.

Anti-police protesters have already spent recent days rallying in Minneapolis as the trial of Derek Chauvin, a white former city police officer, entered its third week Monday with the state nearing the end of a case built on searing witness accounts, official rejections of the neck restraint and expert testimony attributing Floyd’s death to a lack of oxygen.

Chauvin, 45, is charged with murder and manslaughter in Floyd’s May 25 death. Police were called to a neighborhood market where Floyd, who was black, was accused of trying to pass a counterfeit bill. Bystander video of Floyd, pinned by Chauvin and two other officers as he cried “I can’t breathe” and eventually grew still, sparked protests and scattered violence around the U.S.

Chauvin attorney Eric Nelson argues that Floyd’s death was caused by drug use and underlying health conditions including a bad heart. He’s expected to call his own medical experts after the prosecution wraps its case, expected early this week. Nelson hasn’t said whether Chauvin will testify.

Prosecutors say Floyd was pinned for nine minutes, 29 seconds. Police officials testified that while officers might sometimes use a knee across a person’s back or shoulder to gain or maintain control, they’re also taught the specific dangers for a person in Floyd’s position – prone on his stomach, with his hands cuffed behind him – and how such a person must be turned into a side recovery position as soon as possible.

Prosecutors called a string of medical experts to testify that Floyd died due to a lack of oxygen, led by Dr. Martin Tobin, a lung and critical care specialist who walked jurors through graphics and charts and had them feel their own necks as he analyzed evidence from videos.

Tobin testified that other factors, not just Chauvin’s knee, made it hard for Floyd to breathe: officers lifting up his handcuffs, the hard pavement, his turned head and a knee on his back. He pinpointed the moment when he said he could see Floyd take his last breath – and said Chauvin’s knee remained on Floyd’s neck for another three minutes, two seconds.

“At the beginning, you can see he’s conscious, you can see slight flickering, and then it disappears,” Tobin said as he highlighted a still image from police body-camera video. “That’s the moment the life goes out of his body.”

Nelson sought to raise doubt about the prosecution’s case. During testimony about Chauvin’s use of the neck restraint, he sought to point out moments in video footage when he said Chauvin’s knee didn’t appear to be on Floyd’s neck. And he again questioned officers about how a gathering crowd might affect officers’ use of force.

A potential gap in the prosecutors’ case appeared Friday when Hennepin County’s chief medical examiner, Dr. Andrew Baker, testified that the way police held Floyd down and compressed his neck “was just more than Mr. Floyd could take” given his heart issues.

Baker didn’t attribute Floyd’s death to asphyxia, as several prosecution medical experts did. And while he said that neither Floyd’s heart problems nor drugs caused his death, he agreed with Nelson that those factors “played a role” in the death.

Ted Sampsell-Jones, a law professor at Mitchell Hamline School of Law in St. Paul, Minnesota, said Baker’s testimony might raise a reasonable doubt about the cause of death, but that the legal standard for establishing causation is quite low. The state has to show only that Chauvin’s conduct was a substantial contributing cause.

“If the state had to show that Chauvin’s conduct was the sole or even primary cause of death, the case would be in real trouble,” Sampsell-Jones said.