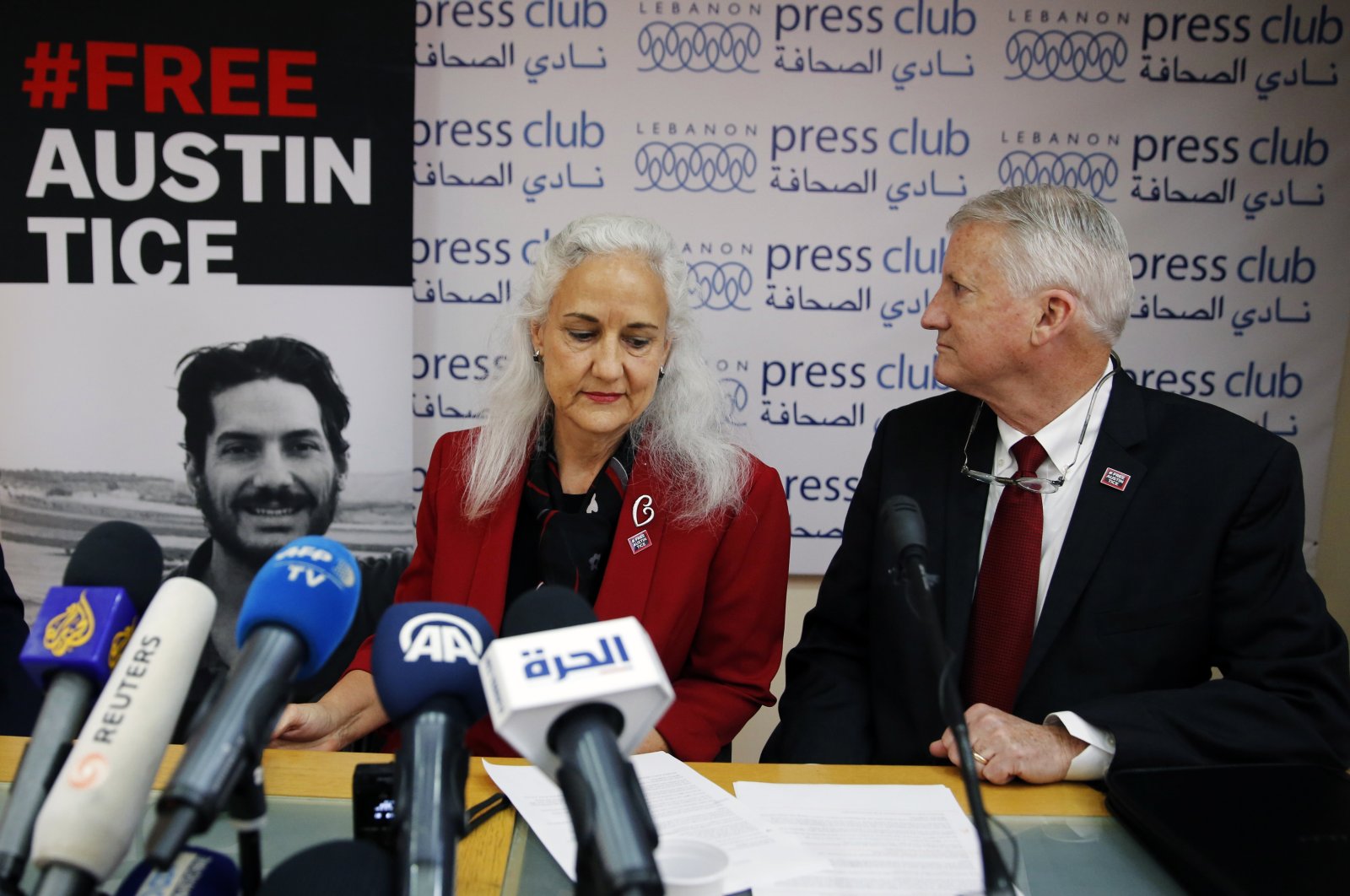 It has been nigh on nine years since the abduction of American journalist Austin Tice in Syria, and recently new details emerged that shed light on the negotiations that took place for his release, between the abductors and two United States officials who ventured into hostile territory for a secret high-stakes meeting.

The representatives that the American side was scheduled to meet in Damascus seemed ready to discuss the fate of U.S. hostages believed to be held in their country, including Austin Tice, a journalist captured eight years earlier. The release of the Americans would be a boon to President Donald Trump months ahead of the election and a breakthrough seemed possible.

Yet the trip was ultimately fruitless, with the Syrians raising a series of demands that would have fundamentally reshaped Washington's policy toward Damascus, including the removal of sanctions, the withdrawal of troops from the country and the restoration of normal diplomatic ties.

Equally as problematic for the American negotiators, the Syrian side offered no meaningful information on the fate and whereabouts of Tice and others. "Success would have been bringing the Americans home and we never got there,” Kash Patel, who attended the meeting as a senior White House aide, said in his first public comments about the effort.

The White House acknowledged the meeting in October, but said little about it. New details have emerged in interviews The Associated Press (AP) conducted in recent weeks with people familiar with the talks, some of whom spoke on condition of anonymity because of the sensitivity of the matter.

The AP has also learned about the U.S. attempts to build goodwill with Syria well before the talks took place, with Patel describing how an unidentified U.S. ally in the region offered assistance with cancer treatment for the wife of Syria's Bashar Assad.

The details shed light on the sensitive and often secretive efforts to free hostages held by U.S. adversaries, a process that yielded high-profile successes for Trump but also dead ends.

It's unclear how aggressively the new Biden administration will advance the efforts to free Tice and other Americans held around the world, particularly when demands at a negotiating table clash with the White House's broader foreign policy goals.

The August meeting in Damascus represented the highest-level talks in years between the U.S. and the Assad side. It was extraordinary given the two countries’ adversarial relationship and because the Syrian regime has never acknowledged holding Tice or knowing anything about his whereabouts. Yet the moment offered some promise.

Trump had already shown a willingness to withdraw U.S. troops from Syria and elsewhere in the Middle East, and he had made hostage recovery a top foreign policy priority, celebrating releases by inviting freed detainees to the White House.

Months after the Damascus talks, as Tice's name resurfaced in the news, Trump sent a note to Tice’s parents, who live in Houston, saying he "would never stop” working for their son’s release, his mother, Debra, told the AP.

However, Tice's fate was unknown when Trump left office on Jan. 20 and remains so to this day. The former Marine had reported for The Washington Post, McClatchy newspapers, CBS and other outlets.

The Biden administration, too, has pledged to make hostage recovery a priority. However, it has also called out the Syrian regime for human rights abuses and seems unlikely to be more receptive to the conditions Damascus raised last summer in order to even continue the dialogue.

Tice has occupied a prominent spot in the public and political consciousness since disappearing in August 2012 at a checkpoint in a contested area west of Damascus. He had ventured deep into the country at a time when other reporters had decided it was too dangerous, disappearing soon before he was to leave.

A video released weeks later showed him blindfolded and held by armed men and saying, "Oh, Jesus.” He has not been heard from since. U.S. authorities operate under the assumption he’s alive. Syrian regime has never acknowledged holding him.

Efforts to secure his release have been complicated by a lack of diplomatic relations and the conflict in Syria, where the U.S. maintains about 900 troops in the eastern part of the country in an effort to prevent the extremist Daesh group’s resurgence.

"My assumption is he’s alive and he’s waiting for me to come and get him," said Roger Carstens, a former Army Special Forces officer who attended the meeting with Patel in his capacity as U.S. special presidential envoy for hostage affairs under Trump. He was kept in the position by Biden.

At the time of the meeting, Patel was senior counterterrorism adviser at the White House after serving as House Intelligence Committee aide, where he gained some notoriety for advancing Republican efforts to challenge the investigation into Russian interference into the 2016 election. He was previously a Justice Department prosecutor under President Barack Obama.

The meeting was more than a year in the making, Patel said, requiring him to seek help in Lebanon, which still has ties with Assad. At one point, a U.S. "ally in the region” also helped build goodwill with the Syrian regime by providing assistance with cancer treatment for Assad’s wife, he said, declining to provide further details.

The Syrian regime announced a year before the meeting that she had recovered from breast cancer.

The men arrived as part of an intentionally small delegation, driving through Damascus and seeing no obvious signs of the conflict that has killed around a half million people and displaced half of Syria’s pre-war population of 23 million over 10 years.

Inside an office of Ali Mamlouk, the head of the Syrian intelligence agency, they asked for information about Tice as well as Majd Kamalmaz, a psychologist from Virginia who vanished in 2017, and several others.

Hostage talks are innately challenging, with negotiators facing demands that may seem unreasonable or at odds with U.S. foreign policy or that may produce nothing even if satisfied. In this instance, the conditions floated by the Syrians, described by multiple people, would have required the U.S. to overhaul virtually its entire Syria policy.

The U.S. shuttered its embassy in Damascus in 2012 and withdrew its ambassador as Syria’s civil war worsened. Though Trump in 2019 announced the withdrawal of troops from northern Syria, a military presence remains to help protect an opposition enclave in the northeast, an area that includes oil and natural gas.

With their demands unmet, the Syrians offered no meaningful information on Tice, including a proof of life, that could have generated significant momentum, Patel said. Though he said he was optimistic after a "legitimate diplomatic engagement,” he looks back with regret.

"I would say it’s probably one of my biggest failures under the Trump administration, not getting Austin back,” Patel said.

In a statement, the State Department said bringing home hostages is one of the Biden administration’s highest priorities and called on Syria to free them. However, prospects for talks are uncertain, especially without a more substantial commitment from Damascus.

It's unlikely that the administration sees the Syrians, called out in December by the global chemical watchdog for failing to declare a chemical weapons facility, as credible negotiating partners. Biden has said little about Syria, though he included it among international problems that the U.N. Security Council should address.

In February, he authorized airstrikes against Iran-backed militias in Syria. Secretary of State Antony Blinken said last week the situation in Syria is as grave as ever. Last November, after a journalist erroneously tweeted that Tice had been released, his mother wrote a note to be delivered to Trump saying she hoped he could one day make that news a reality.

Trump responded, photocopying her note and adding his own Sharpie-written message. "Debra,” he wrote, she recalled. "Working so hard on this. Looking for the answer. We want Austin back. I will never stop.”

However, she said the family does not need letters from the president. "The thing that is wanted here, the thing we are asking here, is to see Austin on the tarmac, and to have the president of the United States shake his hand,” she said.