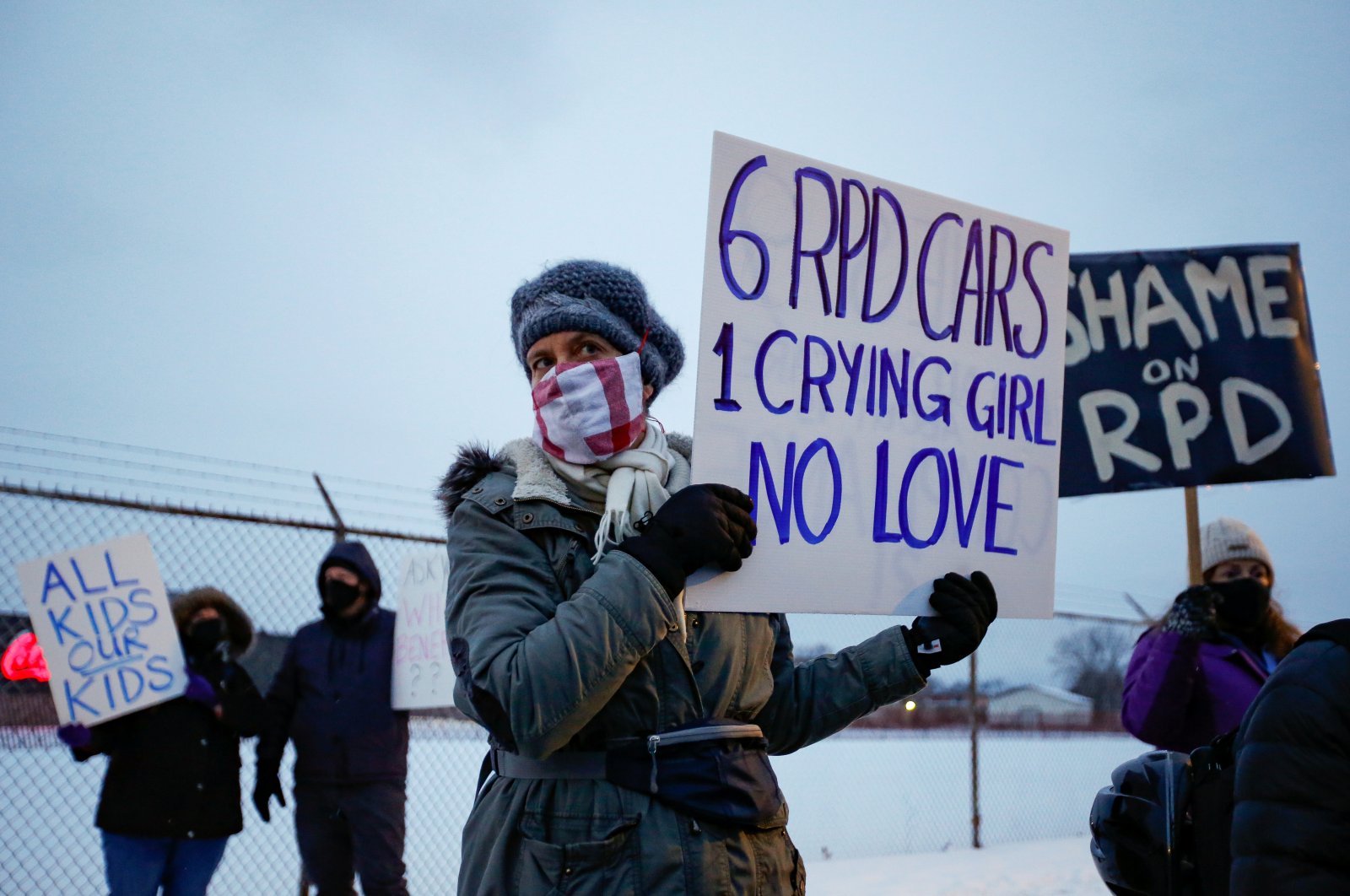 People protest the police's use of excessive force after a nine-year-old girl was handcuffed and sprayed with a chemical irritant in Rochester, New York, U.S., Feb. 1, 2021. (Reuters Photo)
by French Press Agency - AFP
Feb 02, 2021 10:41 am

Police officers who handcuffed and used pepper spray on a black nine-year-old girl in the American city of Rochester were suspended on Monday at the request of the mayor.

"What happened Friday was simply horrible, and has rightly outraged, all of our community," said Mayor Lovely Warren. "Unfortunately, (New York) state law and union contract prevents me from taking more immediate and serious action." Warren did not specify how many officers were suspended.

The suspension will last at least until the conclusion of an internal investigation by the Rochester police. Footage released Sunday, which has sparked new outrage over the use of excessive force by the country's law enforcement, showed at least seven officers were involved in the incident Friday.

Deputy Police Chief Andre Anderson said Sunday the girl – who has not been named – had been suffering from a serious mental health emergency, reportedly threatening to take her own life and that of her mother.

Officers called to the scene on Friday eventually responded by handcuffing her, before trying to force her into a car and pepper-spraying her when she resisted, body cam videos released by the city's police force showed.

Footage of police violence against African Americans, including the May 2020 killing of George Floyd, sparked a summer of protests across the U.S. against racial injustice and police brutality last year.

Rochester police on Saturday said they were "required" to use handcuffs and the irritant against the girl for her own safety.

Body cam footage initially shows officers attempting to provide assistance to the girl. When her mother arrives, the pair argue and the officers – after failing to de-escalate the situation – decide to transport the increasingly distressed child to hospital.

A struggle ensues to get the child into a police vehicle, that ends with her being pepper-sprayed. The video shows the girl crying out repeatedly for her father, while being physically restrained. At one point an officer can be heard saying, "You're acting like a child" – to which she responds, "I am a child!"

Warren condemned the use of force against a young girl, pledging an internal review of the city's law enforcement practices.

"It is clear from the video that we need to do more supporting our children and families," she said at a press conference Sunday. "I have a 10-year-old child, so she's a child, she's a baby," she added. "This video, as a mother, is not anything you want to see. We have to understand compassion, empathy."

The incident is the second time in a year that Rochester has come under national scrutiny for police violence, following the killing last March of Daniel Prude, who died after police forced him face down on the road.

The death of Prude, an African American man who was also experiencing a mental health crisis at the time of his detention, prompted a grand jury probe and sparked mass protests. Rochester city council members condemned the footage, accusing the police of excessive force in a situation where mental health professionals should have been involved.

"I'm not going to stand here and tell you that for a 9-year-old to have to be pepper-sprayed is OK," she said Sunday. "It's not."

But the local police union president defended the officers' actions, saying that "limited resources" had left them no choice but to use pepper spray against the child.

"This is not about lack of compassion or empathy," Mike Mazzeo said Sunday. "We're dealing with a very difficult situation."