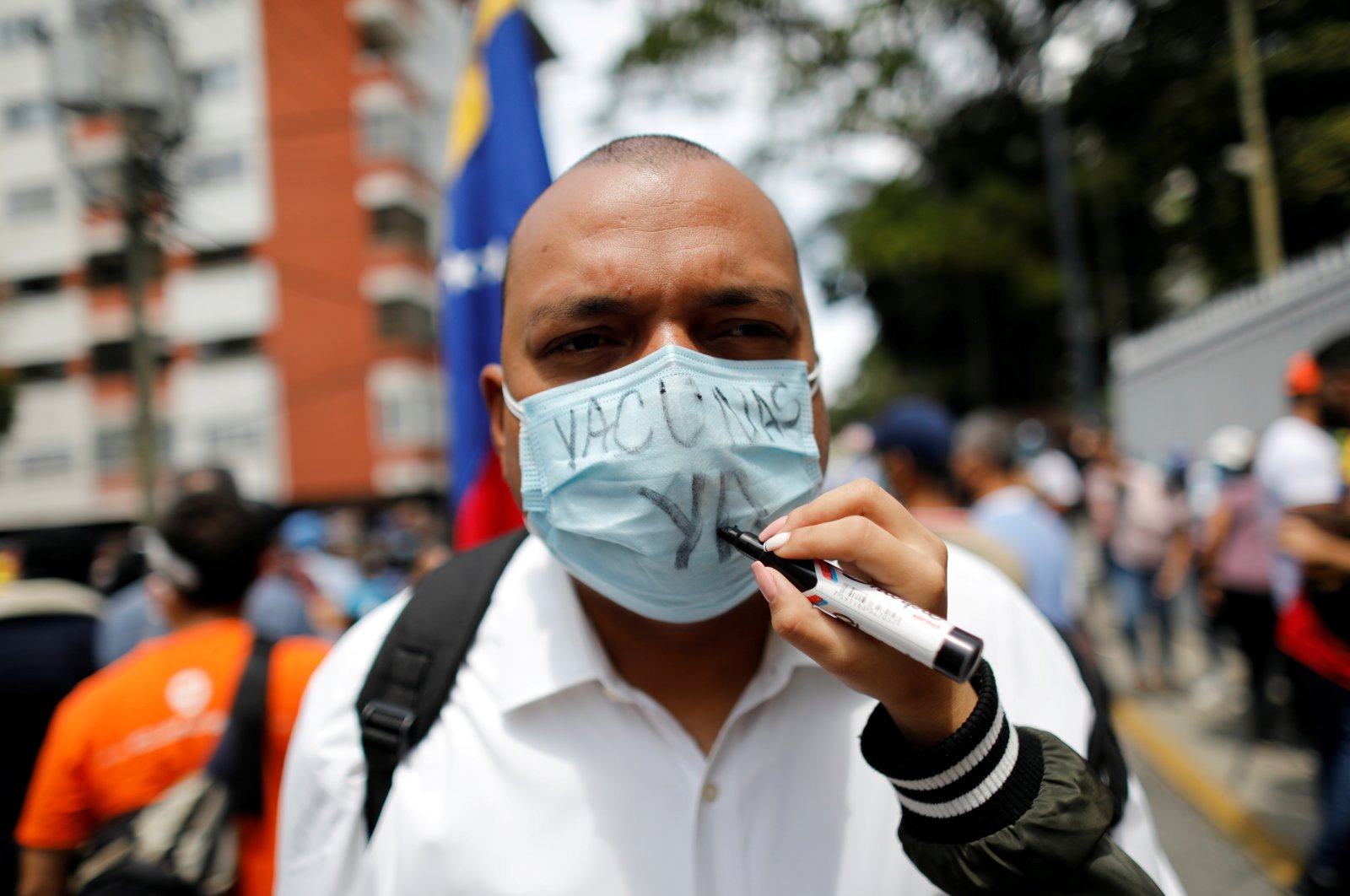 A person writes "Vaccines, now!" on the face mask of a health care worker during a protest demanding vaccinations against COVID-19, in Caracas, Venezuela, April 17, 2021. (REUTERS Photo)
by REUTERS May 18, 2021 12:07 am
RECOMMENDED

If Venezuela continues at its current pace it could take up to 10 years to fully vaccinate the country's population against COVID-19, the president of Venezuela's National Academy of Medicine said on Monday.

Venezuela, with about 30 million inhabitants, has received 1.4 million vaccines from China and Russia, according to its health ministry. Authorities hope to receive enough doses for about 5 million people from the World Health Organization's (WHO) COVAX system.

The government has not announced how many people have received the vaccine.

Venezuela has administered at least 250,000 doses of COVID-19 vaccines, with less than 1% of the population having received a first dose, according to Reuters' vaccine tracker.

Since the first COVID-19 infections were announced in March of last year, authorities have announced 215,301 cases and 2,396 deaths from COVID-19, increased by a second wave this past March.

But Dr. Enrique Lopez-Loyo, president of Venezuela's National Academy of Medicine, said specialists from the independent institution and international studies calculate the official figure should be multiplied by eight or 10 due to the country's low test rate.

"No system of (quarantine) relaxation or restriction is perfect," Lopez-Loyo said, referring to President Nicolas Maduro's quarantine plan that alternates between "flexible" weeks, during which it is easier to enter stores and move around, and "radical" weeks, marked by more closed businesses and more strict checkpoints.

Lopez-Loyo emphasized that vaccination was the best way to control the pandemic.

"At this speed (of vaccination) that we have ... it could take up to 10 years to get vaccinated if there is no effective vaccination (distribution)," said Lopez-Loyo.

He said that although the academy has made its recommendations public and is a member of the Venezuelan government's round table developing a response to the coronavirus crisis, its advice is not heeded by officials.

"We are not listened to because we are seen as enemies," he said, noting the government's rejection of the academy's criticisms of its medical training.

The information ministry did not immediately respond to a request for comment.