US braces for protests as jury deliberates verdict in Chauvin trial 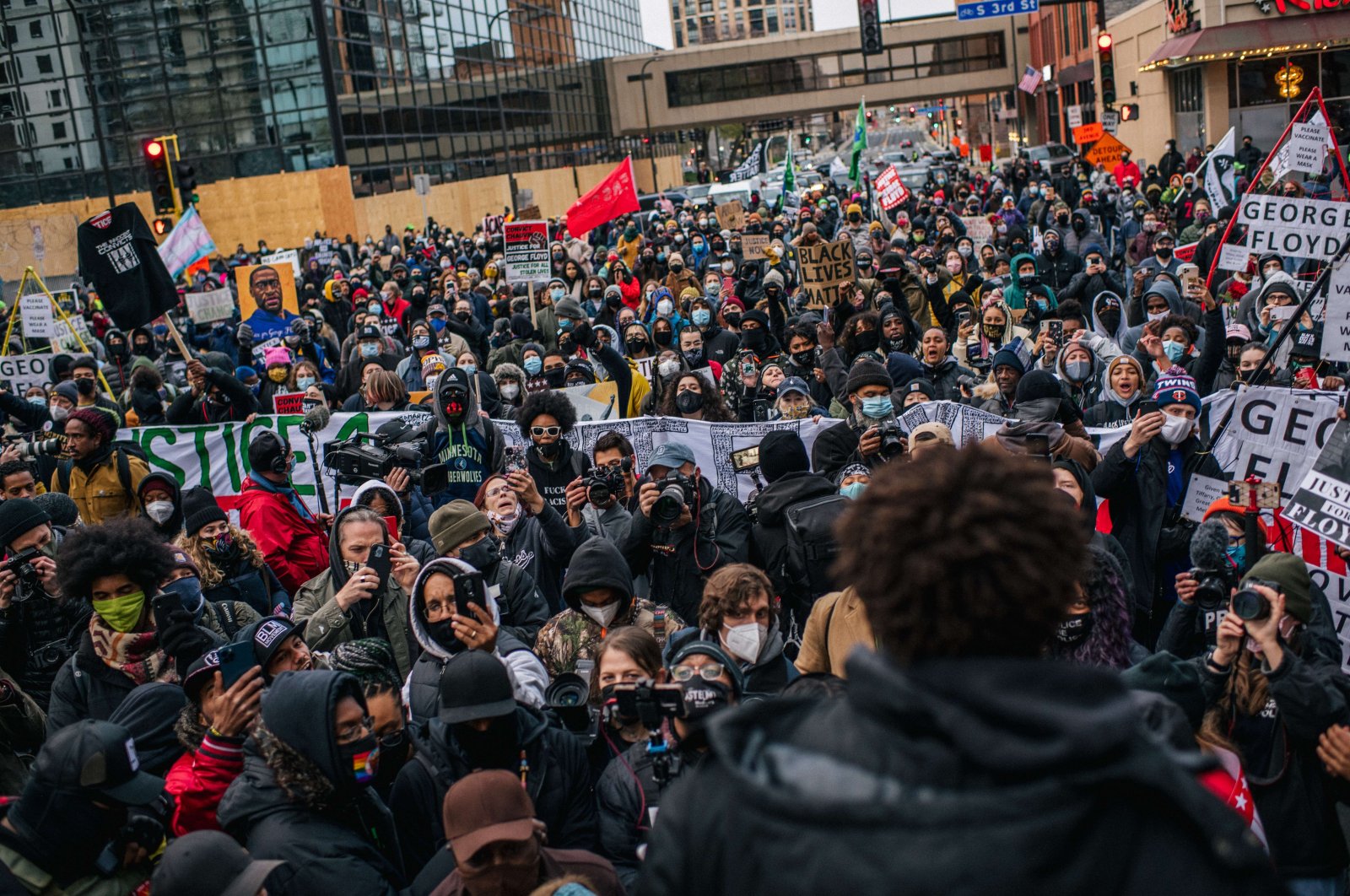 The jury in the trial of the white ex-police officer accused of killing black man George Floyd in Minneapolis last year has retired to discuss the verdict as cities across the United States are bracing for protests regardless of the final decision.

Just outside the entrance to Smile Orthodontics, in a Minneapolis neighborhood of craft breweries and trendy shops, two soldiers in jungle camouflage and body armor were on watch Monday, assault rifles slung over their backs. Snow flurries blew around them. A few steps away at the Iron Door Pub, three more National Guard soldiers and a Minneapolis police officer stood out front, watching the street. A handful of other soldiers were scattered nearby, along with four camouflaged Humvees and a couple of police cars.

Across the street was a boarded-up building spray-painted with big yellow letters: “BLACK LIVES MATTER ALL YEAR ROUND.”

More than 3,000 National Guard soldiers, along with police officers, state police, sheriffs deputies and other law enforcement personnel have flooded the city in recent days, with a verdict looming in the trial of Chauvin. But in the city that has come to epitomize America’s debate over police killings, there are places today in Minneapolis that feel almost like a police state.

Concrete barriers, chain-link fences and barbed wire now ring parts of downtown Minneapolis so that authorities can quickly close off the courthouse where the trial is being held. It’s become normal in recent days to pass convoys of desert-tan military vehicles on nearby highways, and stumble across armed men and women standing guard.

The jurors who sat quietly off-camera through three weeks of draining testimony in Chauvin's murder trial moved into the spotlight Tuesday, still out of sight but now in control of verdicts awaited by a skittish city.

The jury of six white people and six who are black or multiracial was set for its first full day of deliberations. The jury, anonymous by order of the judge and sequestered now until they reach a verdict, spent just a few hours on their task Monday after the day was mostly consumed by closing arguments in which prosecutors argued that Chauvin squeezed the life out of Floyd last May in a way that even a child knew was wrong.

The defense contended that the now-fired white officer acted reasonably and that the 46-year-old Floyd died of a heart condition and illegal drug use. Chauvin, 45, is charged with second-degree murder, third-degree murder and second-degree manslaughter, all of which require the jury to conclude that his actions were a "substantial causal factor” in Floyd's death and that his use of force was unreasonable. The most serious charge carries up to 40 years in prison.

"Use your common sense. Believe your eyes. What you saw, you saw,” prosecutor Steve Schleicher said in closing arguments, referring to the bystander video of Floyd pinned to the pavement with Chauvin's knee on or close to his neck for up to nine minutes, 29 seconds, as onlookers yelled at the officer to get off.

Chauvin attorney Eric Nelson countered by arguing that Chauvin did what any reasonable police officer would have done after finding himself in a "dynamic” and "fluid” situation involving a large man struggling with three officers.

As Nelson began speaking, the now-fired Chauvin removed his COVID-19 mask in front of the jury for one of the very few times during the trial. With the case drawing to a close, some stores were boarded up in Minneapolis.

Floyd's death set off protests last spring in the city and across the U.S. that sometimes turned violent. The city has also been on edge in recent days over the deadly police shooting of a 20-year-old black man, Daunte Wright, in a nearby suburb on April 11.

About 300 protesters marched in the streets outside the courthouse shortly after the jury got the case, lining up behind a banner reading, "Justice 4 George Floyd & all stolen lives. The world is watching.”

Prosecutor Jerry Blackwell had the final word Monday, offering the state's rebuttal argument. The prosecutor, who is black, said the questions about the use of force and cause of death are "so simple that a child can understand it.”

"In fact, a child did understand it, when the 9-year-old girl said, ‘Get off of him,’” Blackwell said, referring to a young witness who objected to what she saw. "That’s how simple it was. 'Get off of him.' Common sense.”

Under the law, police have a certain latitude to use force, and their actions are supposed to be judged according to what a "reasonable officer” in the same situation would have done. Nelson noted that officers who first went to the corner store where Floyd allegedly passed a counterfeit $20 bill were struggling with Floyd when Chauvin arrived as backup.

The defense attorney also pointed out that the first two officers on the scene were rookies and that police had been told that Floyd might be on drugs. "A reasonable police officer understands the intensity of the struggle,” Nelson said, noting that Chauvin’s body camera and badge were knocked off his chest. Nelson also showed the jury pictures of pills found in Floyd's SUV and pill remnants discovered in the squad car. Fentanyl and methamphetamine were found in Floyd's system.

The defense attorney said the failure of the prosecution to acknowledge that medical problems or drugs played a role "defies medical science and it defies common sense and reason.”

During the prosecution's argument, Schleicher replayed portions of the bystander video and other footage as he dismissed certain defense theories about Floyd's death as "nonsense." He said Chauvin killed Floyd by constricting his breathing. Schleicher rejected the drug overdose argument, as well as the contention that police were distracted by hostile onlookers, that Floyd had "superhuman” strength from a state of agitation known as excited delirium, and that he suffered possible carbon monoxide poisoning from auto exhaust.

The prosecutor sarcastically referred to the idea that it was heart disease that killed Floyd as an "amazing coincidence.”

"Is that common sense or is that nonsense?” Schleicher asked the jury. Blackwell, his fellow prosecutor, likewise rejected the defense theory that Floyd died because of an enlarged heart: "The truth of the matter is that the reason George Floyd is dead is because Mr. Chauvin’s heart was too small.”

Earlier, Schleicher described how Chauvin ignored Floyd's cries and continued to kneel on him well after he stopped breathing and had no pulse. Chauvin was "on top of him for nine minutes and 29 seconds and he had to know,” Schleicher said.

"He had to know.” He said Chauvin heard Floyd, "but he just didn't listen.”

The prosecutor said Floyd was "not a threat to anyone" and was not trying to escape when he struggled with officers but instead was terrified of being put into the tiny backseat of the squad car. He said a reasonable officer with Chauvin’s training and experience – he was a 19-year Minneapolis police veteran – should have sized up the situation accurately. Chauvin showed little expression as he watched himself and the other officers pinning Floyd to the ground on bodycam video played by his attorney. He cocked his head to the side and occasionally leaned forward to write on a notepad.

An unidentified woman occupied the single seat set aside in the pandemic-spaced courtroom for a Chauvin supporter. Floyd's brother Philonise represented the family in court in the morning, followed later by a nephew, Brandon Williams.

Schleicher also noted that Chauvin was required to use his training to provide medical care to Floyd but ignored bystanders, rebuffed help from an off-duty paramedic and rejected a suggestion from another officer to roll Floyd onto his side.

After closing arguments were done, Judge Peter Cahill rejected a defense request for a mistrial based in part on comments from California Rep. Maxine Waters, who said "we’ve got to get more confrontational” if Chauvin isn’t convicted of murder.

The judge told Chauvin’s attorney: "Congresswoman Waters may have given you something on appeal that may result in this whole trial being overturned.” He called her comments "abhorrent” and "disrespectful to the rule of law and to the judicial branch.”

The streets in Minneapolis were silent on Monday and the hearing in the court was not disrupted. Activists say local residents are preparing to hit the streets regardless of the verdict. According to media reports, if Chauvin is cleared of all charges or is found guilty only of manslaughter, mass protests will spark across the country. "A celebratory protest" is also planned if the white officer is found guilty on all counts. In this case, the campaigners will take to the streets to demonstrate their satisfaction with the sentence and demand justice for others who died in police custody.