US House committee votes to prosecute Bannon over Capitol attack 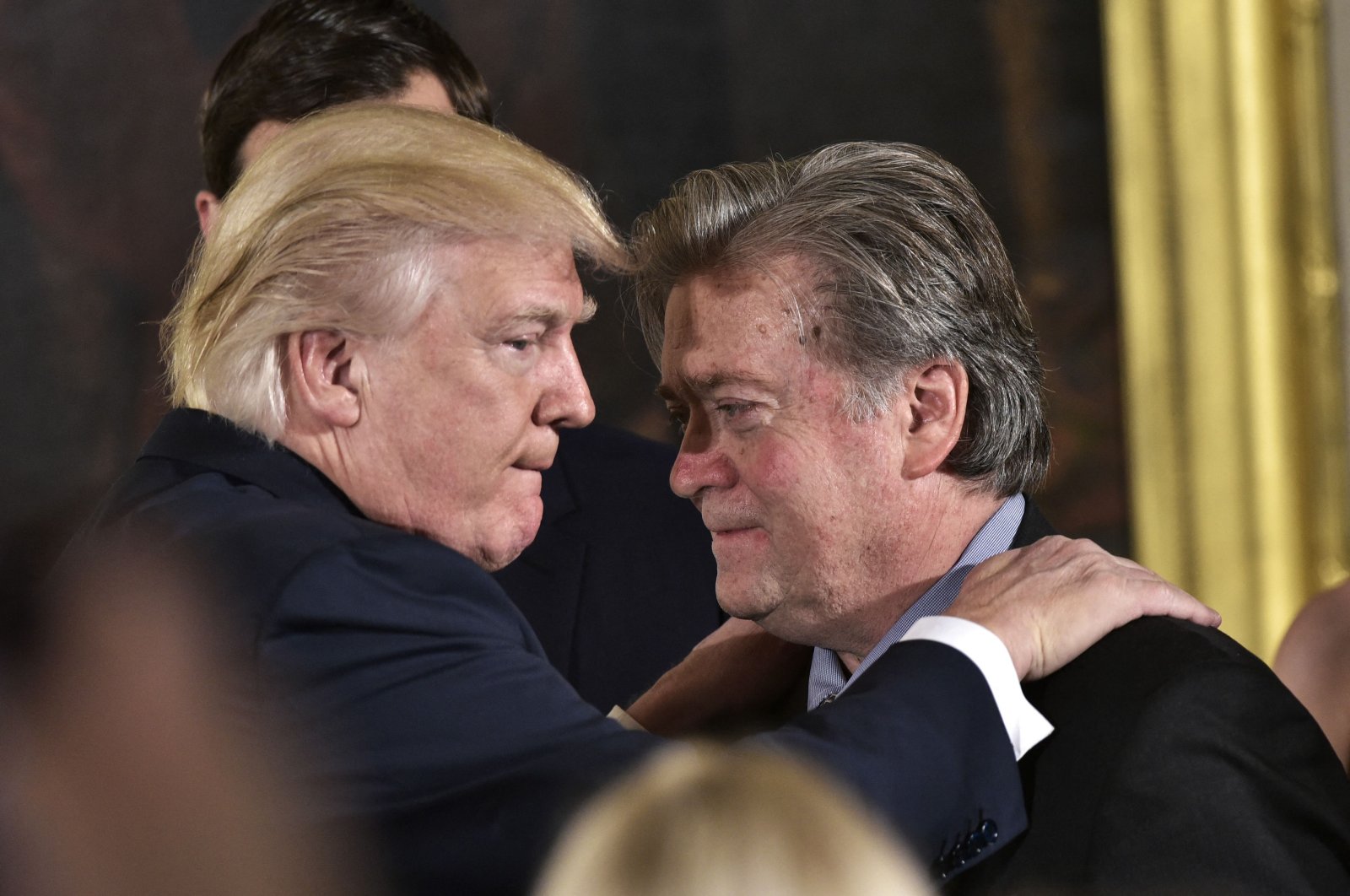 Former U.S. President Donald Trump (L) congratulates Senior Counselor to the President Stephen Bannon during the swearing-in of senior staff in the East Room of the White House in Washington, D.C., U.S., Jan. 22, 2017. (AFP Photo)
by REUTERS Oct 20, 2021 11:09 am
RECOMMENDED

A U.S. congressional committee probing the deadly Jan. 6 assault on the Capitol voted unanimously on Tuesday in favor of contempt-of-Congress charges against Steve Bannon, a longtime aide to former President Donald Trump.

The seven Democratic and two Republican members of the House of Representatives Select Committee approved a report recommending the criminal charge by a 9-0 vote, calling it "shocking" that Bannon refused to comply with subpoenas seeking documents and testimony.

Approval of the report paved the way for the entire House to vote on whether to recommend contempt charges. That vote is set for Thursday, when the full, Democratic-controlled chamber is expected to approve the report.

A spokesperson for the U.S. Attorney's Office for the District of Columbia said prosecutors there would "evaluate the matter based on the facts and the law" if the full House approves the recommendation.

"It's a shame that Mr. Bannon has put us in this position. But we won't take 'no' for an answer," Representative Bennie Thompson, the panel's chairperson, said in his opening remarks. Bannon's attorney did not respond to a request for comment on Tuesday evening.

Before leaving office in January, Trump pardoned Bannon of charges he had swindled the Republican president's supporters. Trump has urged former aides subpoenaed by the panel to reject its requests, claiming executive privilege. Bannon, through his lawyer, has said he will not cooperate with the committee until Trump's executive privilege claim is resolved by a court or through a settlement agreement.

At Tuesday's meeting, Republican Representative Liz Cheney, the select committee's vice chair, said: "Mr. Bannon's and Mr. Trump's privilege arguments do appear to reveal one thing, however: They suggest that President Trump was personally involved in the planning and execution of Jan. 6th. And we will get to the bottom of that."

Thompson said Bannon "stands alone" among those subpoenaed in his refusal to cooperate.

More than 670 people have been charged with taking part in the riot, the worst attack on the U.S. government since the War of 1812. The select committee has issued 19 subpoenas. "It's shocking to me that anyone would not do everything in their power to assist our investigation," Thompson said.

In its report, the committee argued that Bannon made statements suggesting he knew ahead of time about "extreme events" on Jan. 6, when Congress was scheduled to certify Democrat Joe Biden as the winner of the presidential election. Bannon said on a Jan. 5 podcast that "all hell is going to break loose tomorrow."

The next day, thousands of Trump supporters descended on the Capitol. Four people died on the day of the assault, and one Capitol police officer died the next day of injuries sustained in defense of the seat of Congress. Hundreds of police officers were injured and four have since taken their own lives. Trump filed suit on Monday, alleging the committee made an illegal, unfounded and overly broad request for his White House records, which committee leaders rejected.

The U.S. Supreme Court said in 1821 that Congress has "inherent authority" to arrest and detain recalcitrant witnesses on its own, without the Justice Department's help. But it has not used that authority in nearly a century. In 1927, the high court said the Senate acted lawfully in sending its deputy sergeant at arms to Ohio to arrest and detain the brother of the then-attorney general, who had refused to testify about a bribery scheme known as the Teapot Dome scandal. It was not immediately clear how the Justice Department would respond to a House recommendation – there have been few accusations of contempt of Congress – but some House members have argued that letting Bannon ignore subpoenas would weaken congressional oversight of the executive branch.

"No one in the United States of America has the right to blow off a subpoena by a court or by the U.S. Congress," panel member Jamie Raskin, a Democrat, told reporters after the meeting. The select committee was created by House Democrats against the wishes of most Republicans.

Two of the committee's nine members – Cheney and Representative Adam Kinzinger – are Republicans who joined House Democrats in voting to impeach Trump in January on a charge of inciting the Jan. 6 attack in a fiery speech to supporters earlier that day. Multiple courts, state election officials and members of Trump's own administration have rejected Trump's claims that Biden won because of election fraud.