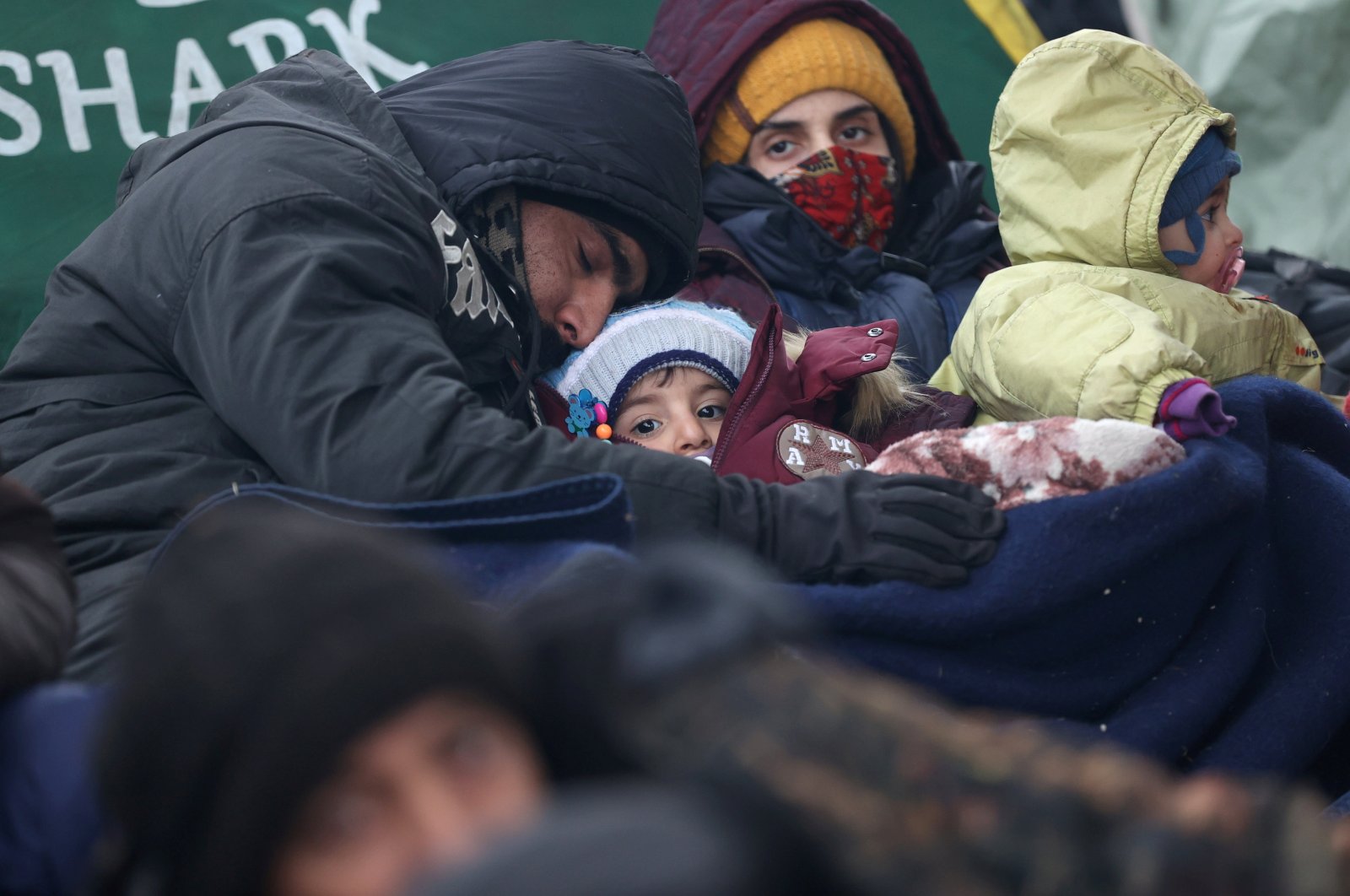 Migrants rest next to a tent set up at the Bruzgi-Kuznica Bialostocka border crossing in the Grodno Region, Belarus, Nov. 15, 2021. (Reuters Photo)
by Agencies Nov 16, 2021 8:53 am
RECOMMENDED

The United States confirmed on Monday that it is working on follow-up tranches of sanctions on Belarus over the "inhumane facilitation" of migrants camped on its border with Poland after a senior European Union official said the 27-nation bloc's penalties would be forthcoming.

The confirmation comes after EU top diplomats agreed to broaden the sanctions criteria in response to Belarus' migrant crisis, providing a legal basis for restrictive measures against airlines and travel agencies involved in transporting migrants to the bloc's borders.

The bloc has widely telegraphed the action amid the ongoing migrant crisis, and the European Commission President Ursula von der Leyen said last week in Washington that the Biden administration would be issuing its share of penalties in December.

State Department spokesperson Ned Price confirmed the forthcoming action, saying the U.S. is "preparing follow-up sanctions in close coordination with EU and other partners and allies."

Those sanctions, Price said, "will continue to hold the Lukashenko regime accountable for its ongoing attacks on democracy, on human rights on international norms." He was referring to Belarusian President Alexander Lukashenko's government.

"We call on the regime to immediately halt its campaign of orchestrating and coercing irregular migrant flows across borders into Europe," he told reporters. "As long as the regime refuses to respect its international obligations and commitments, as long as it undermines peace and security of its neighbors and of the broader continent, as long as it continues to repress and abuse its people and hold political prisoners, we will continue to put more pressure, not less pressure, on the Lukashenko regime, as we call for accountability," he added.

According to the EU, Belarus reaches out to potential travelers through seemingly official channels, including diplomatic missions and travel agencies, and invites them to Belarus by offering visas. They are then allegedly guided to the EU border.

NATO and the EU consider Belarus' approach toward migrants a hybrid attack meant to destabilize and undermine security in European countries through non-military means. Since August, the EU countries bordering Belarus – Lithuania, Latvia, and Poland – have reported a dramatically growing number of irregular crossings.

Over 8,000 people have tried to enter the bloc via the Belarus-EU border this year, compared to just 150 the previous year. Over the last week, at least 2,000 people, including women and children, have been stuck in the Belarusian-Polish border area in dire conditions.

Diplomatic efforts to defuse the crisis intensified Monday as German Chancellor Angela Merkel and French President Emmanuel Macron threw their clout into resolving the stalemate that has left thousands of migrants stranded.

Merkel held a rare telephone conversation with Lukashenko that lasted about 50 minutes, Belarusian state television reported, saying their focus was on de-escalating the situation and humanitarian support for the migrants. There was no immediate confirmation from the German side about their conversation.

Macron, meanwhile, held a lengthy telephone conversation with Russian President Vladimir Putin, who is Lukashenko's primary political backer. The two spoke about the role Russia could play in easing the conflict that began simmering this summer, as well as the plight of the migrants, sources at the Elysee Palace in Paris said afterward. According to the Kremlin, Putin said that the heads of the EU states should discuss the problem directly with Lukashenko.

Stanislaw Zaryn, the spokesperson for the country's intelligence services, said late Monday that the situation at Kuznica was calm and that refugees had begun to set up a tent camp. But Polish police said a group of several hundred migrants tried in vain to crossover border fortifications near the village of Starzyna. Polish forces deployed there were pelted with rocks. It remains impossible to verify any information independently, as both Belarusian and Polish officials keep journalists and aid groups far away from the border.

The Czech Republic on Monday offered to send help to Poland, saying its neighbor had been the victim of "an attack" by Lukashenko.

Belarusian officials suggested they were willing to work to send the migrants back home – a plan that, if credible, could calm the crisis with the EU but enrage people unwilling to return to the war zones they left.

"We are actively working on convincing these people to head home," claimed Lukashenko in comments to the Belta news agency before his conversation with Merkel. "Nobody wants to go back," he told Belta. "These people are very stubborn."

Meanwhile, Iraq says it is organizing a flight on Thursday to repatriate citizens on the Poland-Belarus border who wish to return to their country. The government is aware of around 750 Iraqis stuck at the border and living in difficult weather conditions. There are more in the forest areas at the border and it is difficult to reach them without the help of international organizations, Iraqi Foreign Ministry spokesperson Ahmed al-Sahaf said.

Iraq suspended regular flights to Belarus a few months ago. It also suspended the work of the Belarusian consul in Baghdad and the northern Iraqi Kurdish city of Erbil to stop the issuance of visas, he added.

Poland's Interior Minister Mariusz Kaminski said Poland plans to start construction this year on a permanent barrier with Belarus. Kaminski tweeted that the construction, once it begins, will focus at first on four sections, with building work taking place around the clock.

Poland has already put up a temporary fence along the border to keep migrants from illegally entering the country. It is made out of barbed wire and stands around 2.5 meters (8.2 feet) high. It will be replaced by a permanent barrier standing 5.5-meter-high and equipped with motion detectors and cameras.

The Polish government calls the fortification a "barrier" or "barricade" – noticeably avoiding the word "wall."