EU agrees on sanction regime against Belarus amid migrant row 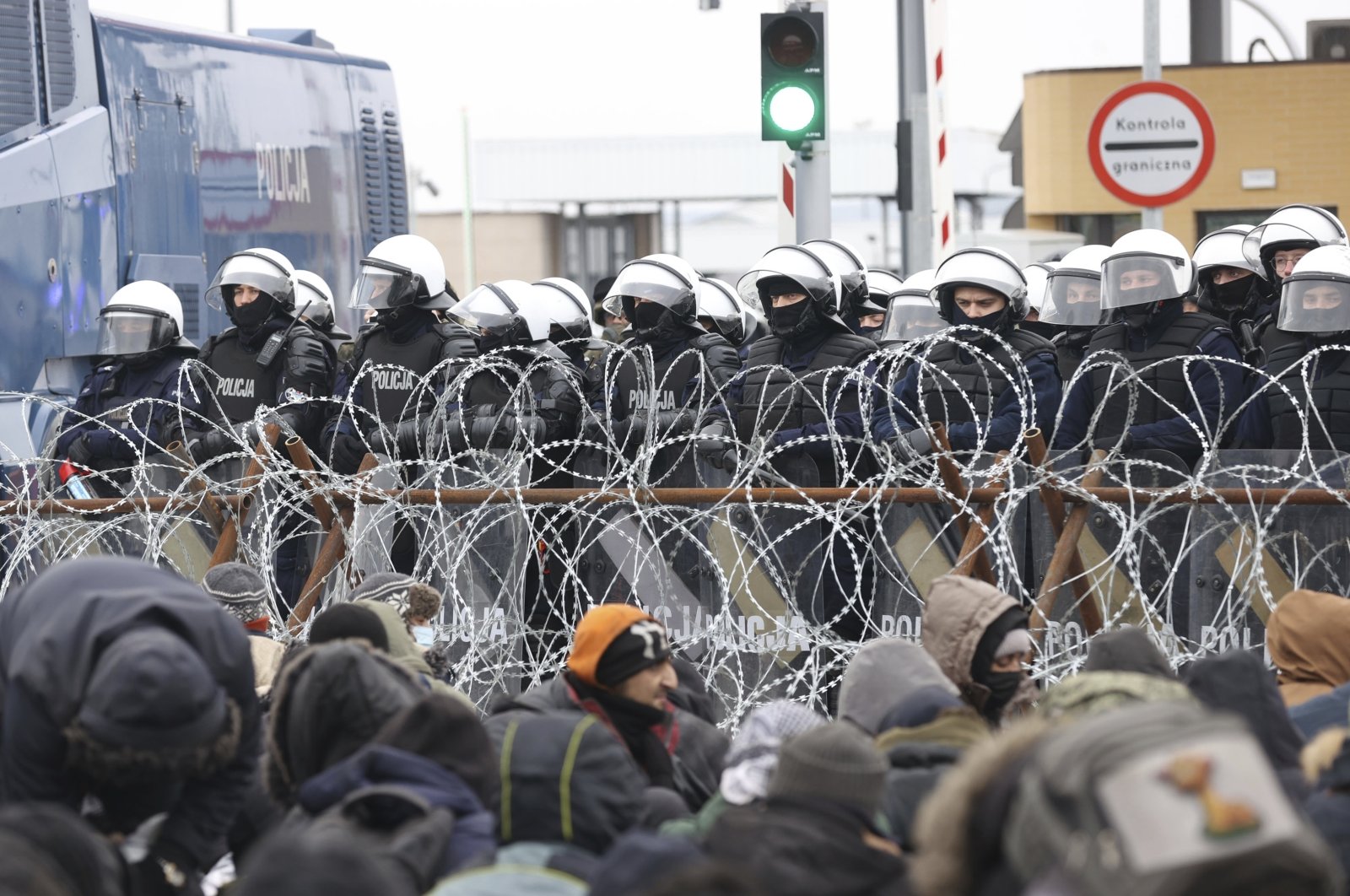 Migrants gather in front of a barbed wire fence and Polish servicemen at the checkpoint "Kuznitsa" at the Belarus-Poland border near Grodno, Belarus, Nov. 15, 2021. (AP Photo)
by DAILY SABAH WITH AGENCIES Nov 15, 2021 2:00 pm

European Union foreign ministers signed off on changes to the bloc's sanctions framework, preparing the way for a new round of sanctions on Belarus

The European Union on Monday ratcheted up pressure on Belarus by agreeing to extend sanctions on President Alexander Lukashenko's regime and others accused of helping him wage a "hybrid attack" against the bloc using migrants.

The foreign ministers of the EU amended their sanctions regime against Belarus so that it can be used to penalize the facilitation of illegal migration into the bloc. A response to the ongoing crisis at the Polish-Belarusian border, the move means that companies – for example, airlines transporting people hoping to claim asylum in the EU – could from now on be blacklisted and unable to do business with EU firms. Individuals could also have any assets in the EU frozen, or be banned from traveling into the bloc. No names of entities or individuals were actually added to the sanctions list in the first instance, however.

"The Council today amended its sanctions regime in view of the situation at the EU's border with Belarus, so as to be able to respond to the instrumentalisation of human beings carried out by the Belarus regime for political purposes," the statement said, according to Reuters.

EU foreign affairs chief Josep Borrell said the move "reflects the determination by the EU to stand up to the instrumentalization of migrants for political purposes."

"We are pushing back on this inhuman and illegal practice," Borrell said in a written statement announcing the extension of the sanctions regime.

"Lukashenko demands that we remove all sanctions. We will give our answer today. We will further tighten sanctions," German Foreign Minister Heiko Maas, who also arrived for a meeting with EU colleagues, said before the announcement of sanctions, while Lithuania's Foreign Minister Gabrielius Landsbergis called for all Belarusian airports to be off-limits for airlines potentially carrying would-be migrants, also offering to help with repatriations from Belarus back to the Middle East.

"We need to make Minsk airport a no-fly zone," he told reporters, including Reuters as he arrived for an EU foreign ministers meeting. "The second thing that we need to talk about is how do we provide safe passage to the people who are already in Belarus, for them to go back home," Landsbergis added.

"We need to work with international organizations like the United Nations and others to bring people back."

Ahead of an EU meeting over new sanctions on Minsk, Lukashenko said that Belarus was working to repatriate the migrants that have amassed on its border with Poland, appearing to move to defuse the crisis. Lukashenko asserted that Belarus does not want the border situation to escalate into a "conflict" and that it was working to send home the several thousand migrants, mostly from the Middle East.

"Active work is underway in this area, to convince people – please, return home. But nobody wants to go back," Lukashenko said, as quoted by state news agency Belta. "But these people, I must say, are very stubborn: no one wants to return," the strongman leader said. "They do not have housing there, they understand that there is nothing to feed their children."

The 67-year-old also suggested that Belarus could take up an offer by officials in Munich to ferry the migrants via its state-run airline Belavia to Germany if Poland does not provide a "humanitarian corridor."

"We will send them to Munich by our own planes, if necessary," Lukashenko said. "Organizing a migration flow through Belarus is more expensive for ourselves," he said. "We have never done this and do not intend to do this." Lukashenko also brushed aside the threat of fresh EU measures.

"We will defend ourselves. That's it, there's nowhere to retreat further," he said, as the Deutsche Presse-Agentur (dpa) reported. Lukashenko also denied that his government has organized the migrant influx, saying that "it isn't worth the effort."

The 27-country EU has already imposed four sets of sanctions on the Belarus authorities and senior officials over the disputed election in August last year that returned Lukashenko to office and the security crackdown on peaceful protesters that followed. EU headquarters said the bloc "will now be able to target individuals and entities organizing or contributing to activities by the Lukashenko regime that facilitate illegal crossing of the EU's external borders."

A list of those to be hit by the asset freezes and travel bans is expected to be finalized in coming days. The EU believes Lukashenko began luring migrants to Belarus in recent months as part of a retaliatory attack meant to destabilize the bloc. The EU has been deeply divided over how to manage migrants since well over 1 million people entered in 2015.

Belarus's state-run airline announced Monday that Syrians, Iraqis, Yemenis and Afghans are banned from incoming flights from the United Arab Emirates (UAE) at Dubai's request, after Minsk was accused of bringing in migrants to send on to Europe. In a statement to citizens of the four countries posted on its website on Sunday, Belavia said they would not be allowed on flights from Dubai to Belarus "in accordance with the decision of competent authorities in the UAE." On Friday, Turkey banned citizens of Syria, Iraq and Yemen from flying from its airports to Belarus, while private Syrian carrier Cham Wings Airlines on Saturday halted flights to Minsk.

A few thousand migrants are stuck in makeshift camps in freezing weather after Poland reinforced its border with 15,000 soldiers last week, in addition to border guards and police. At least nine have died. Many people want to head further west, often to Germany. Numerous clashes and attempted crossings have been reported at the border, but under a state of emergency in Poland only the security forces have access, and the incidents are impossible to independently verify.

On Monday, Poland reported fresh new attempts to cross its border in several parts of the country. Polish defense ministry as well as border guards released a series of videos depicting a large crowd of migrants gathering at a shut border crossing between Poland and Belarus.

"More and more groups of migrants are being brought to the Kuznica border crossing by Belarusian forces," the defense ministry said on Twitter, as videos appeared to show hundreds of migrants in front of lines of Polish police and soldiers. Deputy Interior Minister Maciej Wasik said there were "thousands of migrants" at the crossing.

"Polish forces are prepared for any scenario," Wasik said.

The border guard service said that "illegal immigrants have been gathering at the border crossing since the morning" and "an attempt is being prepared to force through the border."

It said some of the migrants "have so far been camping out at the border" nearby in the Belarusian village of Bruzgi. The videos could not be independently verified as Poland has banned journalists from the immediate border area under state of emergency rules brought in as part of efforts to block migrants.

Poland says that between 3,000 and 4,000 migrants are currently camped out along the border in a crisis that has pitted Western countries against Belarus and its ally Russia. According to Qatar-based media outlet Al-Jazeera, migrants are managing to cross the border.

“Regardless of how many forces Poland puts along the border ... people are still managing to get through,” said Al-Jazeera's reporter Assed Baig in Polish town of Hajnowka, which is just near the crossing point with Belarus. “And we are hearing that there is a push this morning on the Belarusian side, from those people who are stuck there, to again try and get past the border,” he asserted in Polish

The EU says that the authoritarian Belarusian regime has for months invited migrants to Minsk, many of them Iraqis and Syrians, with the promise of help to get them across the borders of the three countries, which form the eastern flank of both the 27-nation EU and NATO.

In an interview Sunday, Polish Prime Minister Mateusz Morawiecki said he and his two Baltic counterparts are discussing whether to call for emergency consultations at the NATO military alliance.

Meanwhile, the closest ally of Belarus, Russia, said on Monday that it was ready to mediate in the migrant crisis between Minsk and the EU, and that the Kremlin was already doing so to an extent. The Kremlin has denied any Russian role in the crisis, but the country's President Vladimir Putin offered to help resolve it on Sunday.

Asked on Monday how Russia saw itself contributing, Kremlin spokesperson Dmitry Peskov said: "exclusively as a negotiating intermediary, which is partly (already) happening."

On a conference call with reporters, Peskov also dismissed as "wrong" a statement by the United States State Department that Belarus' actions on the border with the EU aimed to distract from Russian military activities close to Ukraine. Kyiv has said there are nearly 100,000 Russian soldiers near its border and the U.S. has issued warnings over possible Russian aggression.