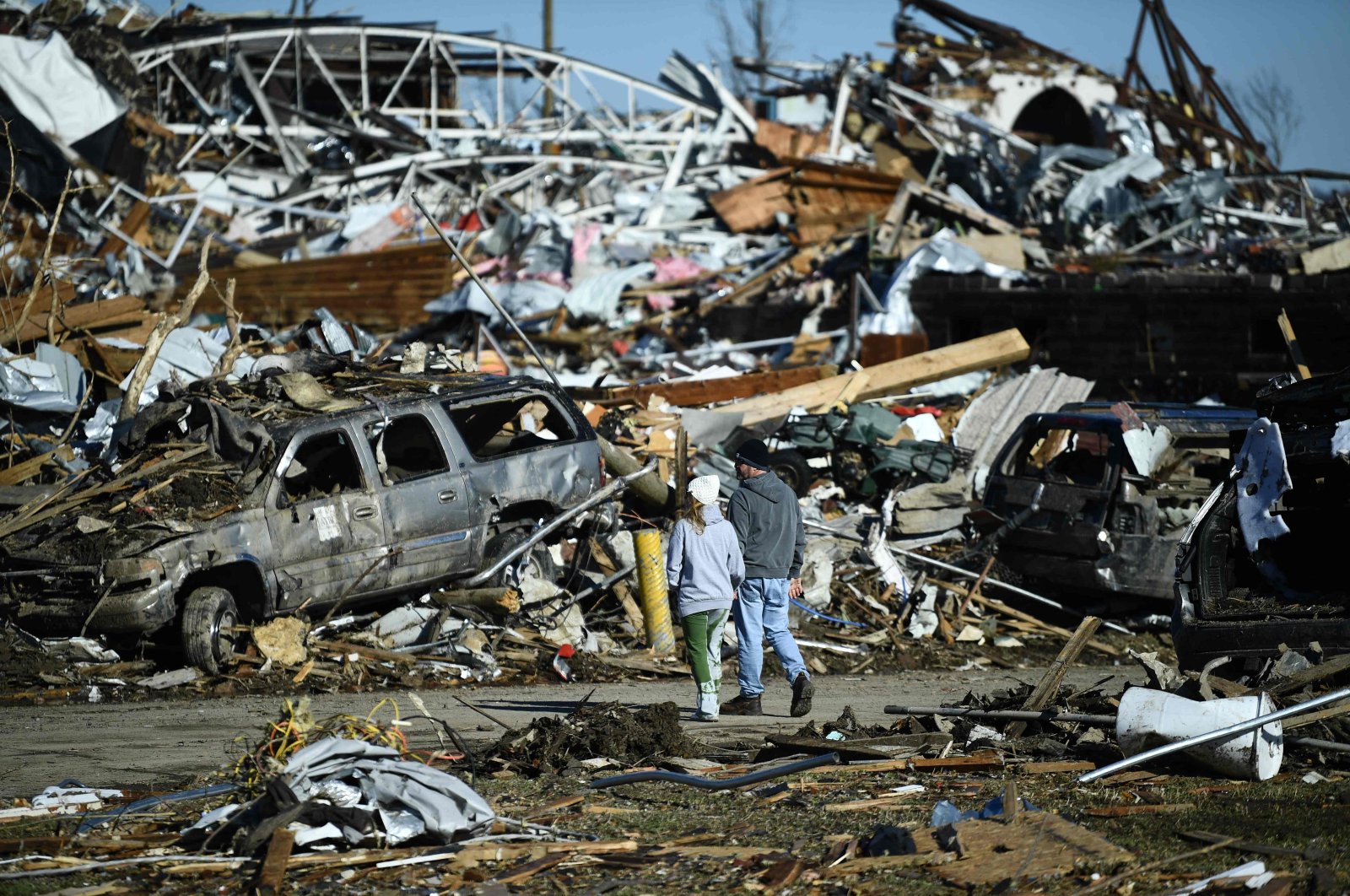 US emergency workers continued their search for survivors Monday after ferocious tornadoes killed dozens of people across several states and left towns in ruins, as the governor of hard-hit Kentucky warned that cadaver dogs were still finding bodies

Night-shift workers were in the middle of the holiday rush, cranking out candles at Mayfield Consumer Products, when a tornado closed in on the factory as people in the area sought shelter.

For Autumn Kirks, that meant tossing aside wax and fragrance buckets to make an improvised safe place. She glanced away from her boyfriend, Lannis Ward, and when she looked back, he was gone. Later in the day, she got the terrible news – that Ward had been killed in the storm.

At least eight people at the factory were killed, among dozens of fatalities across several Kentucky counties. The state was the worst hit by far in an unusual mid-December swarm of twisters across the Midwest and the South that leveled entire communities and left at least 14 people dead in Illinois, Tennessee, Arkansas and Missouri. But the factory toll, at least, will be lower than initially feared.

Gov. Andy Beshear said Saturday that only 40 of the 110 people working in the factory at the time were rescued, and that "it’ll be a miracle if anybody else is found alive in it.” But on Sunday, the candle company said that while eight were confirmed dead and eight remained missing, more than 90 others had been located.

"Many of the employees were gathered in the tornado shelter and after the storm was over they left the plant and went to their homes,” said Bob Ferguson, a spokesperson for the company. "With the power out and no landline they were hard to reach initially. We’re hoping to find more of those eight unaccounted as we try their home residences.”

Beshear had said Sunday morning that the state’s toll could exceed 100. But after state officials heard the company's update, he said that afternoon it might be as low as 50.

"We are praying that maybe original estimates of those we have lost were wrong. If so, it’s going to be pretty wonderful,” the governor said, adding that the search forces are "still finding bodies."

"We've got cadaver dogs in towns that they shouldn't have to be in," he said.

Rescuers at the candle factory had to crawl over the dead to get to the living at a disaster scene that smelled like scented candles. By the time churchgoers gathered Sunday morning to pray for the lost, more than 24 hours had elapsed since anyone had been found alive. Instead, crews recovered pieces of peoples’ lives – a backpack, a pair of shoes and a cellphone with 27 missed messages were among the items.

Four twisters hit the state in all, including one with an extraordinarily long path of about 200 miles (322 kilometers), authorities said. The outbreak was all the more remarkable because it came at a time of year when cold weather normally limits tornadoes. Twelve people were reported killed in and around Bowling Green alone.

"I’ve got towns that are gone, that are just, I mean gone. My dad’s hometown – half of it isn’t standing,” Beshear said of Dawson Springs. He added that going door to door in search of victims is out of the question in the hardest-hit areas: "There are no doors.”

"We’re going to have over 1,000 homes that are gone, just gone,” the governor said, according to The Associated Press (AP).

With afternoon high temperatures forecast only in the 40s, tens of thousands of people were without power. About 300 National Guard members went house to house, checking on people and helping to remove debris. Cadaver dogs searched for victims.

Kirks said she and her boyfriend were about 10 feet (3 meters) apart in a hallway when someone said to take cover. Suddenly, she saw sky and lightning where a wall had been, and Ward had vanished.

"I remember taking my eyes off of him for a second, and then he was gone,” she said. "It was indescribable,” Pastor Joel Cauley said of the disaster scene. "It was almost like you were in a twilight zone. You could smell the aroma of candles, and you could hear the cries of people for help. Candle smells and all the sirens is not something I ever expected to experience at the same time.”

The outbreak also killed at least six people in Illinois, where an Amazon distribution center in Edwardsville was hit; four in Tennessee; two in Arkansas, where a nursing home was destroyed and the governor said workers shielded residents with their own bodies; and two in Missouri.

Amazon cargo driver Austin J. McEwen, 26, was an only child who loved to listen to rapper Mac Miller and hunt with his friends. He died trying to shelter from a powerful tornado in the bathroom at an Amazon.com warehouse on Friday night, according to a coworker.

McEwen was one of six workers identified by police on Sunday who were killed when their plant in Edwardsville, Illinois, buckled under the force of the devastating storm. A barrage of tornados ripped through six U.S. states, leaving a trail of death and destruction at homes and businesses stretching more than 200 miles.

"He was my friend and he didn't make it," said coworker Brian Erdmann, who was on his way to make a delivery to the warehouse. "If I would have got back 45 minutes earlier, I probably would have been at the same place. I would have been right there with him."

"Our team worked quickly to ensure as many employees and partners could get to the designated Shelter in Place," the company said in a statement. "We thank them for everything they were able to do."

At least 45 Amazon employees made it out safely. Authorities had given up hope of finding more survivors as they shifted from rescue to recovery efforts that were expected to last days.

Amazon said it was donating $1 million to the Edwardsville Community Foundation. The company said it is providing relief supplies as well as transport, food and water.

On Sunday, Amazon workers arrived at the warehouse across the street, heavily guarded by security, to start shifts.

"It's a reminder of the trauma that I just endured but I will be returning to work at Amazon," said McEwen's friend and coworker Emily Epperson. "This is my livelihood."

Debris from destroyed buildings and shredded trees covered the ground in Mayfield, a city of about 10,000 in western Kentucky. Twisted sheet metal, downed power lines and wrecked vehicles lined the streets. Windows were blown out and roofs torn off the buildings that were still standing.

In the shadows of their crumpled church sanctuaries, two congregations in Mayfield came together on Sunday to pray for those who were lost. Members of First Christian Church and First Presbyterian Church met in a parking lot surrounded by rubble, piles of broken bricks and metal.

More and more tornadoes like this are forming in Alabama and elsewhere in the south of the country, and experts say that in general, especially recently, tornadoes don’t behave the way they used to. They are more likely to occur in large outbreaks and happen earlier and later during the year. The meteorological monsters are slightly less common in some of the traditionally tornado-prone states of the Great Plains known as “Tornado Alley,” stretching from Texas to South Dakota.

“Basically, over the last 50 years, if you live in a place like Dallas, your chance of a tornado there has gradually gone down,” Victor Gensini, an associate professor in the Department of Geographic and Atmospheric Science at Northern Illinois University told USA Today media outlet. “But if you’re in a place like Birmingham, Alabama, or Memphis, Tennessee, your threat has gone way up.”

According to Gensini, devastating tornados still pose a threat to the plains.

“It’s not that Texas and Oklahoma don’t get tornadoes,” he said. “They’re still the No. 1 location in terms of tornado frequency, but the trend in many locations is down over the past 40 years.”

However, in Alabama and Kentucky, according to an analysis of federal tornado data by USA Today, the average annual number of registered tornadoes more than doubled between 2000 and 2020, compared to the annual average for the previous 20-year period. That average increased by over 50% in Arkansas, Mississippi, Missouri, Tennessee and Virginia.

Scientists are not entirely sure why some states are seeing growth and others declining. But they do know that many tornadoes form in storms generated by the warm, humid air off the coast of the Gulf of Mexico, and that warming there is rapidly accelerating.