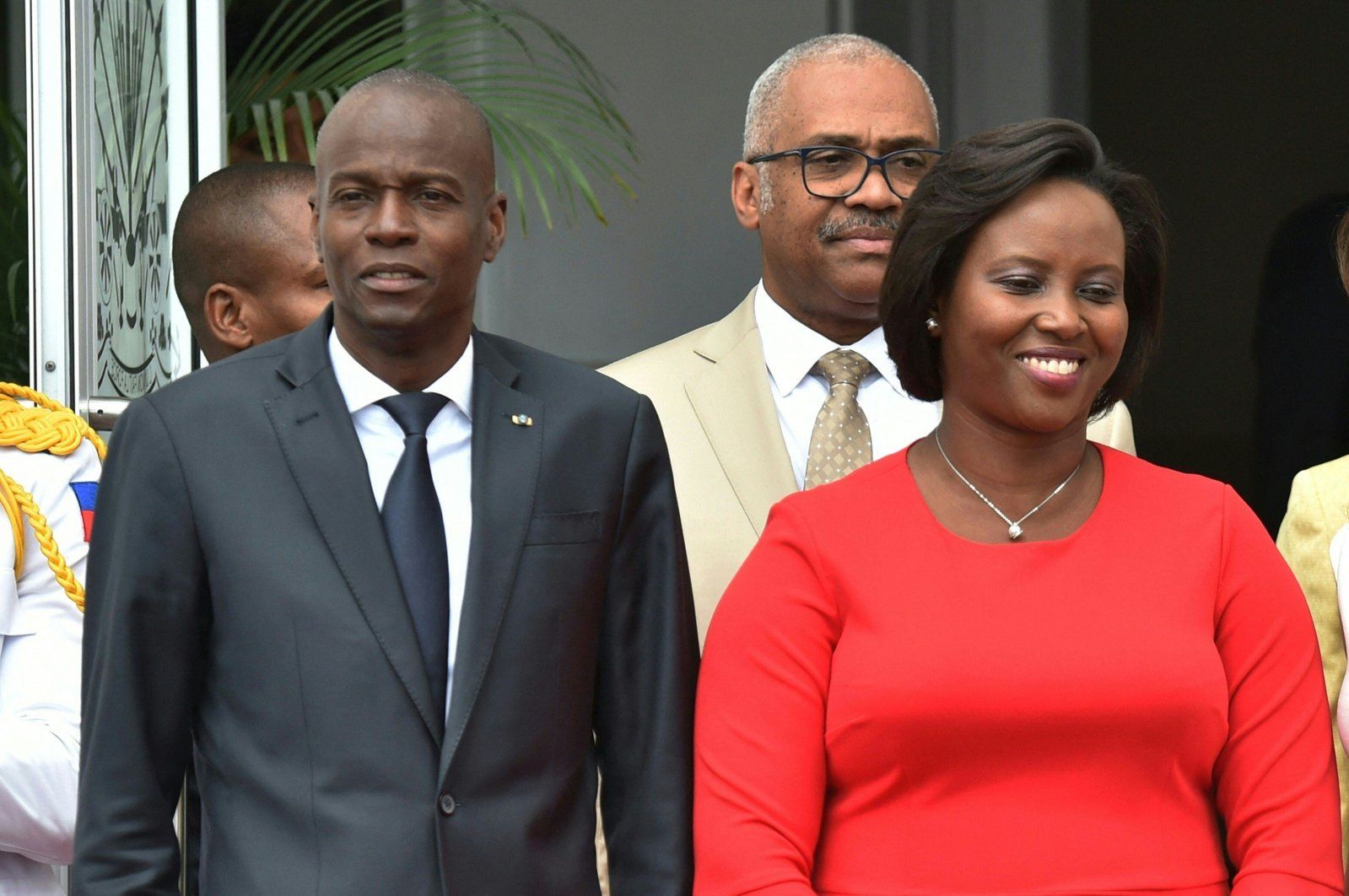 The widow of slain Haitian President Jovenel Moise on Saturday accused shadowy enemies of organizing his assassination to stop democratic change, as a struggle for power intensified in the Caribbean country.

Moise was gunned down before dawn on Wednesday at his Port-au-Prince home by what Haitian authorities said was a unit of trained assassins comprised of 26 Colombians and two Haitian Americans.

Doubts have grown, though, about that narrative, with families of at least two of the Colombians saying they had been hired as bodyguards. Martine Moise, who was wounded in the attack on the president's private residence and flown to Florida for medical treatment, said her husband was targeted for political reasons. "You know who the president was fighting against," she said in a recording released on Twitter, without naming anybody.

"They sent mercenaries to kill the president at his home with members of his family because of roads, water, electricity and the referendum as well as elections at the end of the year so that there is no transition in the country."

The late president had spoken of dark forces at play behind years of unrest under his mandate – rival politicians and oligarchs angry about what he called his attempts to clean up government contracts and politics – and proposed a referendum to change Haiti's constitution. The referendum, scheduled for Sept. 26 along with presidential and legislative elections, could abolish the prime minister's position, reshape the legislative branch and strengthen the presidency.

Critics called it a power grab. Moise's killing has clouded those plans and led to political disarray in Haiti, where the acting government has appealed for U.S. and U.N. troops. The United States said it has no plans to provide Haiti with military assistance for now, while the request to the United Nations would need Security Council authorization.

Late on Friday, the man Moise appointed as prime minister just before the assassination claimed the right to lead Haiti, pitting him against acting head of state Claude Joseph, whose government has managed the response to the killing to date. Ariel Henry, a neurosurgeon who Moise named prime minister on Monday, told Reuters late on Friday he was now the highest authority in Haiti, not interim Prime Minister Joseph, and that he was forming a government.

"After the president's assassination, I became the highest, legal and regular authority because there was a decree nominating me," he said. Henry said his government would create a new electoral council which would determine new dates for elections to be held "as soon as possible." But Henry has yet to be sworn in, and Joseph, who was named interim prime minister in April, has stayed put. The power struggle has created confusion over who is the legitimate leader of the country's 11 million people.

Elections Minister Mathias Pierre said acting premier Joseph would keep that role until the Sept. 26 vote. Meanwhile, Haiti's Senate, which currently comprises just a third of its usual 30 senators, on Friday nominated its head, Joseph Lambert, to act as the interim president, a document reviewed by Reuters showed. Haiti's 1987 constitution stipulates the head of the Supreme Court should take over as interim president. But amendments that are not unanimously recognized state that it be the prime minister, or, in the last year of a president's mandate – as was the case with Moise – that the parliament should elect a president.

Further complicating matters, the head of the Supreme Court died last month after contracting COVID-19 in one of the few countries yet to start a vaccination campaign. There also is no sitting parliament as legislative elections scheduled for late 2019 were postponed amid political unrest.

Haitian officials have not given a motive for the assassination or explained how the killers got past Moise's security detail. None of Moise's guards were injured in the attack, Pierre, the elections minister, told Reuters.

Taking power in 2017, Moise's administration was beset by mass protests, first over corruption allegations and his economic record, then over his increasing grip on power and impunity amid worsening gang violence. Seventeen of the men suspected of involvement in his assassination were captured after a gun battle with Haitian authorities in a hillside suburb of Port-au-Prince, while three were killed and eight are still at large, police say.

Steven Benoit, a former senator, told local radio station Magik9 on Saturday, "The president was assassinated by his own guards, not by the Colombians ... The latter were hired by the Haitian state."

Benoit could not be reached on Saturday for comment. The sister of Duberney Capador, 40, a Colombian killed in the firefight with Haitian police, told Reuters in a video call on Saturday that the retired soldier had been offered work in security for high-profile people.

Jenny Carolina Capador said her brother messaged her on the day of Moise's death, saying, "We got here too late; unfortunately the person we were going to guard ... we couldn't do anything." Colombian media reports from outlets including Semana and El Tiempo suggested the Colombian suspects were hired to work as security for politicians in Haiti, including Moise. Semana cited conversations with other former soldiers and family members of some of the men.

El Tiempo said some of the men were contracted to provide security to "several dignitaries" in Haiti for a three-month trial period. Reuters was unable to verify those reports. Colombian police declined to specify on Saturday who hired the men, saying the matter is still under investigation.

Officials have said the soldiers were hired by four companies, without naming them. Colombian officials acknowledge soldiers are often recruited to work as mercenaries in other countries upon retirement from the army.

Colombia has requested more information from Haiti about what the soldiers are suspected of participating in. Colombian investigators on Friday flew to Port-au-Prince to help Haitian authorities with the assassination probe, said Colombia's head of national police.