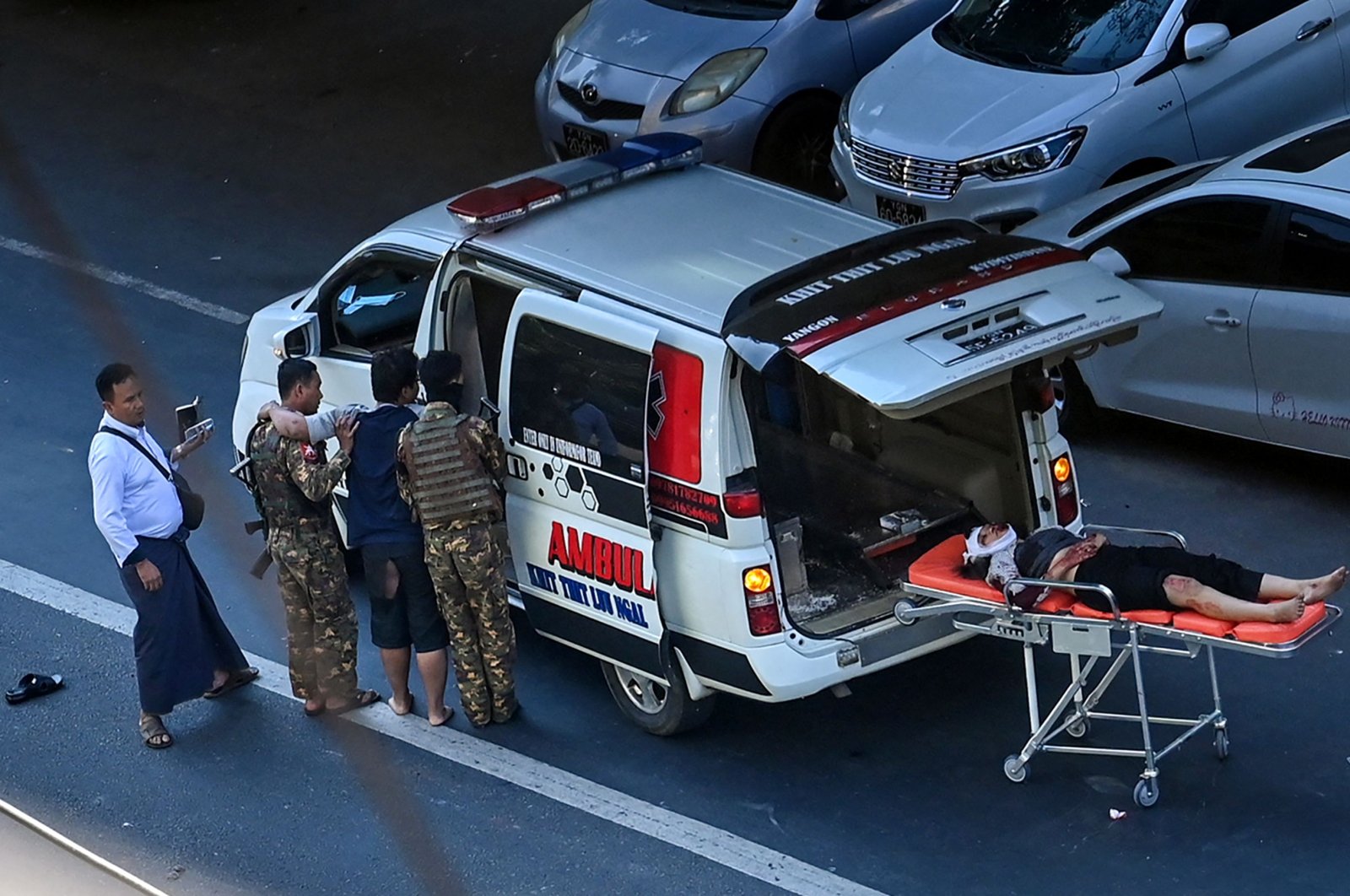 A journalist (3rd L), who was covering a protest against the military coup, receives medical attention as an injured protester lies on a stretcher beside an ambulance after a crackdown on the demonstration by security forces in Yangon, Myanmar, Dec. 5, 2021. (AFP Photo)
by Reuters Dec 05, 2021 10:30 am
RECOMMENDED

Five people were killed and at least 15 arrested after Myanmar security forces in a car plowed into an anti-coup protest on Sunday morning in Yangon, local news portal Myanmar Now reported.

Witnesses on the scene told Reuters dozens had been injured. Photos and videos on social media show a vehicle that ran over the protesters, leaving behind bodies lying on the road.

Another protest was held in Yangon in the afternoon despite the morning violence.

Anti-military protests are continuing despite the killing of more than 1,300 people since the Feb. 1 coup. The scattered protests are often small groups opposing the ouster of an elected government led by Nobel laureate Aung San Suu Kyi and the return of military rule.

"I got hit and fell in front of a truck. A soldier beat me with his rifle but I defended and pushed him back. Then he immediately shot at me as I ran away in a zig-zag pattern. Fortunately, I escaped," a protester, who asked for anonymity due to security reasons, told Reuters over the phone.

A civilian car occupied by soldiers hit the mob from the back, two witnesses said, and followed the scattered protesters arresting and beating them. According to the witnesses, some were seriously injured with head wounds and were unconscious.

A spokesperson for the ruling junta did not answer calls seeking comment on Sunday.

The military has said that protesters, who have been killed, instigated the violence. It says it staged the coup because a November election won by Suu Kyi's party was rigged. The election commission has dismissed the assertion.

Wars with ethnic minority insurgents in remote frontier regions in the north and east have intensified significantly since the coup, displacing tens of thousands of civilians, according to United Nations estimates.

Suu Kyi, 76, faces a dozen cases against her, including incitement and violations of the COVID-19 protocols. She has rejected all the charges to date.