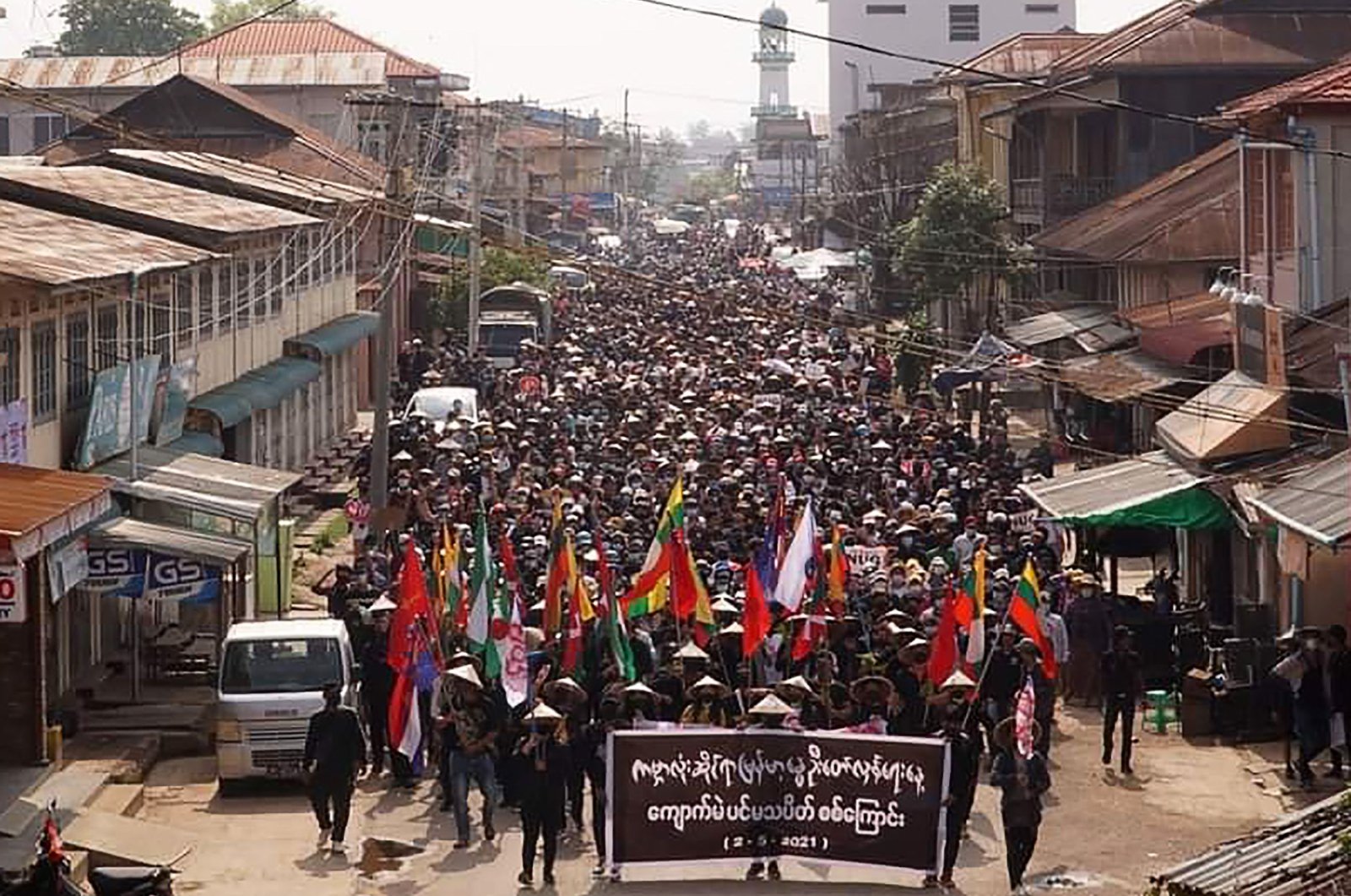 Cities, rural areas, remote mountainous regions and even rebel-controlled border territories have been in uproar since the military ousted civilian leader Aung San Suu Kyi in a Feb. 1 coup.

The junta has aimed to suppress dissent through a brutal crackdown involving mass arrests and an escalating death toll.

Demonstrations kicked off early in commercial hub Yangon as activists called for a show of force and a "spring revolution."

Youths gathered on a street corner before marching swiftly down the streets in a flash mob – dispersing soon after to avoid clashing with authorities.

"To bring down the military dictatorship is our cause!" they chanted, waving a three-finger salute of resistance.

In eastern Shan state, youths carried a banner that read: "We cannot be ruled at all."

Local media reported that security forces were chasing protesters down and arresting them.

"They are arresting every young person they see," a source in Yangon told Agence France-Presse (AFP), adding that he was hiding at the time.

Bomb blasts also went off across different parts of Yangon on Sunday. Explosions have been happening with increasing frequency in the former capital, which authorities have blamed it on "instigators."

Bloodshed across the country

So far, security forces have killed 759 civilians, according to local monitoring group the Assistance Association for Political Prisoners (AAPP).

The junta – which has labeled the AAPP an unlawful organization – says 258 protesters have been killed, along with 17 police officers and seven soldiers.

Violence erupted again on Sunday by 10 a.m. in Shan state's Hsipaw township, when security forces opened fire on protesters, killing at least one.

"He was shot in the head and died immediately," said one protester, who said he rushed to hide his friend's body in case authorities tried to take it away.

"They are asking for his dead body, but we will not give them... We will have his funeral today," he told AFP.

In northern Kachin state, security forces also fired on protesters, even flinging grenades into the crowd.

A 33-year-old man was shot in the head, a fellow demonstrator told AFP, adding that many others were wounded in the attack.

"They all had to be treated at a hidden area. They could not go to the hospital for treatment or they would have been arrested," the protester said.

Urban centers have become hotspots for unrest, especially in Yangon, where residents share videos of security forces beating up civilians on the streets.

Night raids and arrests are also common, with informers reporting to authorities about people suspected to be aiding the anti-coup movement.

State-run newspaper Mirror Daily reported that a woman accused of supporting an underground parallel government opposing the junta was sentenced by military tribunal to seven years in prison with hard labor.

She had been arrested in Yangon's North Dagon Township – which is currently under martial law – after police had raided her home and searched her Facebook and Telegram messaging apps.

Airstrikes in the east

The junta's violence against civilians has drawn the ire of Myanmar's myriad of ethnic armies – many of whom have been battling the military for decades in the country's border regions.

Among the most prominent opponents is the Karen National Union (KNU), which has admitted offering shelter to fleeing activists in the territory they control along Myanmar's east.

Clashes have ramped up in Karen state between the KNU's fighters and the military, which has responded with serious artillery power and airstrikes in towns next to the Thai border.

Thai authorities announced that the Myanmar military fired rocket offensives from the air to a KNU base on Saturday, and grenade launchers and sporadic gunfire could be heard throughout the day from the kingdom's bordering Mae Hong Son province.

A letter was sent last week to Myanmar counterparts calling for the military to "increase caution on airstrikes to avoid it falling into Thai territories," said Sunday's statement from Mae Hong Son province.

"(This) could cause danger to Thais living on the border and affect the good relationship," it said.

So far, more than 2,300 Myanmar nationals have crossed over for refuge.

Junta leader Min Aung Hlaing has justified the putsch by saying it was done to defend democracy, alleging electoral fraud in November's elections, which Suu Kyi's party won in a landslide.