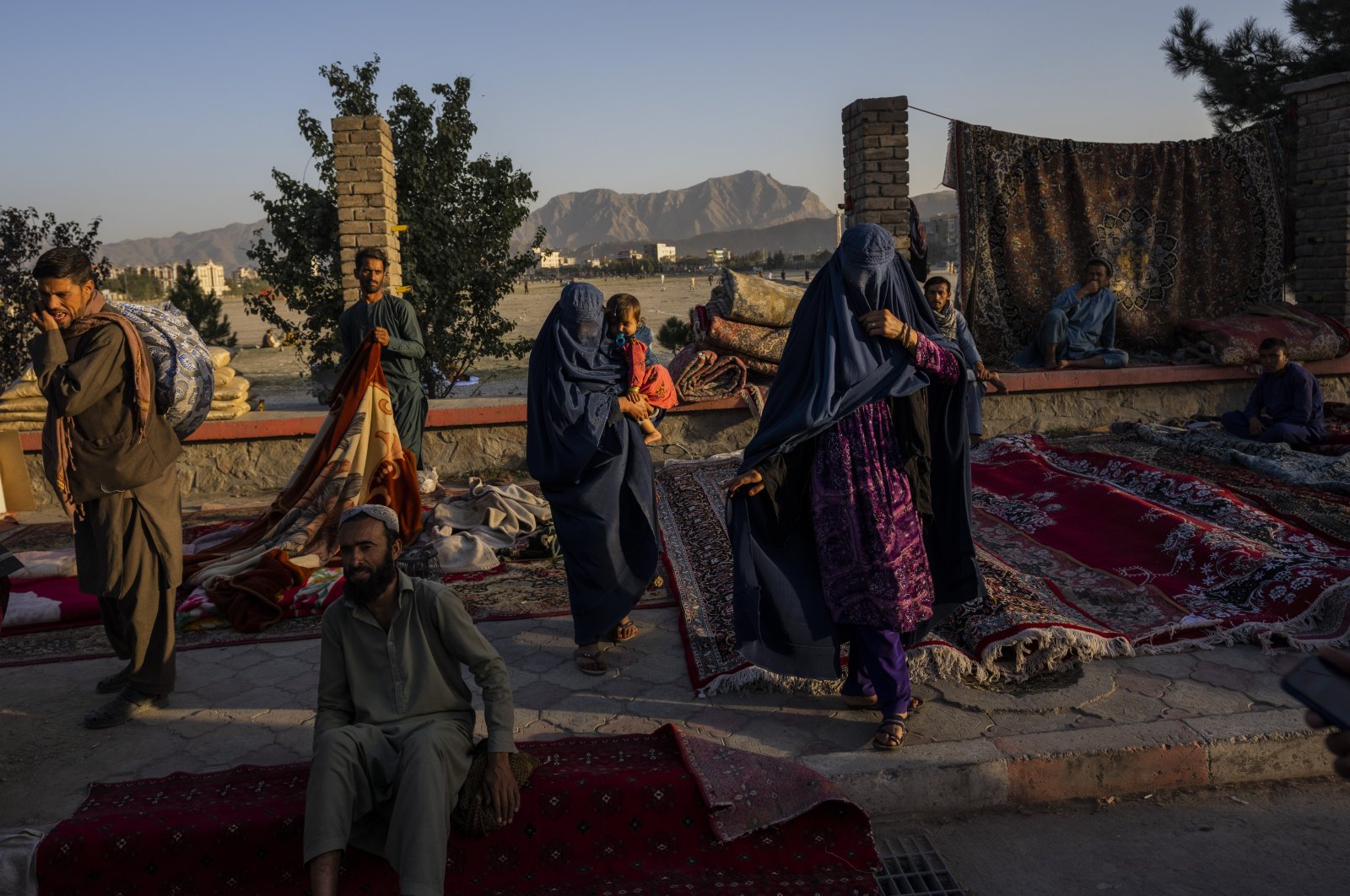 Afghan women walk through a second-hand market where many families sold their belongings before leaving the country or due to financial struggle, in Kabul, Afghanistan, Sept. 15, 2021. (AP Photo)
by ASSOCIATED PRESS Sep 16, 2021 9:36 am

Afghan aid groups are stuck in limbo amid difficulties in obtaining emergency relief from international organizations, basic services and funds for population at risk of hunger, unemployment and the coronavirus after the Taliban's rapid takeover of Afghanistan

A month after the fall of Kabul, the world is still wrestling with how to help Afghanistan’s impoverished people without propping up their Taliban leaders – a question that is growing more urgent by the day.

With the Afghan government severed from the international banking system, aid groups both inside Afghanistan and abroad say they are struggling to get emergency relief, basic services and funds to a population at risk of starvation, unemployment and the coronavirus after 20 years of war.

Among the groups struggling to function is a public health nonprofit that paid salaries and purchased food and fuel for hospitals with contributions from the World Bank, the European Union and the U.S. Agency for International Development (USAID).

The $600 million in funds, which were funneled through the Afghan Health Ministry, dried up overnight after the Taliban took over the capital. Now, clinics in Afghanistan's eastern Khost Province no longer can afford to clean even as they are beset with COVID-19 patients, and the region's hospitals have asked patients to purchase their own syringes, according to Organization for Health Promotion and Management's (OHPM) local chapter head Abdul Wali.

"All we do is wait and pray for cash to come,” Wali said. "We face disaster, if this continues.”

Donor countries pledged during a United Nations appeal this week to open their purse strings to the tune of $1.2 billion in humanitarian aid. But attempts by Western governments and international financial institutions to deprive the Taliban-controlled government of other funding sources until its intentions are clearer also has Afghan's most vulnerable citizens hurting.

The World Bank, the International Monetary Fund (IMF) and the European Union suspended financing for projects in Afghanistan, and the United States froze $7 billion in Afghan foreign reserves held in New York.

Foreign aid to Afghanistan previously ran some $8.5 billion a year – nearly half of the country's gross domestic product (GDP). Without access to its own or foreign funds, the interim government in Kabul can’t even pay the import taxes needed to bring containers of badly needed food from a port in Pakistan, the country's Chamber of Commerce and Industry Vice-Chair Yonus Momand said.

The West's strategy is to strangle the Taliban’s finances to induce Afghanistan's new leaders to respect the rights of women and religious minorities. The all-male, hard-line Cabinet appointed last week includes several ministers subject to U.N. sanctions and one with a $5 million FBI bounty on his head.

While it's unclear how long Afghan central bank reserves will remain out of reach, American officials insist that humanitarian groups can sidestep Taliban authorities to deliver directly to the needy Afghans fearing for their lives and futures in the wake of the chaotic U.S. pullout.

"It's definitely still possible to meet the basic needs of Afghans without rewarding the government with broader economic assistance and diplomatic recognition,” said Lisa Curtis, former South and Central Asia director of the U.S. National Security Council. But the situation on the ground shows the limits of that approach.

Fighting over the years has displaced over 3.5 million people – including over half a million since the start of the year. The price of basic goods has soared. Bank lines snake down streets as people wait hours, even days, to withdraw money so they can feed their families. While individuals are allowed to withdraw a maximum of $200 per week from Afghanistan’s banks, organizations are unable to get any funds.

The paralysis has hampered the work of local authorities who used World Bank development funds to pay for health services and clean water, as well as international charitable groups trying to run vast aid operations.

Cut off from their bank accounts, groups dependent on international donors are using stop-gap methods to stay afloat. They are getting their hands on operating cash through a mixture of mobile payment service M-PESA, Western Union transfers and hawala – the informal money transfer system that helped power the economy when Taliban ruled Afghanistan in the 1990s.

The ancient system, which existed in the country before banks, relies on the principle that if there are two people who want to send equal amounts of money between two locations, cash doesn’t need to change hands. International anti-poverty organization CARE is among the relief providers that rely on hawala dealers to transfer funds and record loans across provinces.

"It's probably not a long-term solution, but the hawala system has been helpful for a long time,” Marianne O’Grady, CARE's deputy Afghanistan director, said. "People trust in it, so it's what we're using."

Meanwhile, some countries, including the United Arab Emirates (UAE), Qatar and Uzbekistan, have avoided the messy debate over financial aid by dispatching planeloads of food and medicine to Kabul, betting that bags of rice will get distributed to the needy and not line the pockets of Taliban ministers who are on terrorism watch lists.

But many insist that informal money transfers and rice shipments are hardly the way to prevent Afghanistan’s financial and social collapse at a time when the stakes are so high: along with drought and the threat of famine, potential Taliban brutality and a collapsing health care system, Afghans face more desperate times as winter approaches.

Although the $1.2 billion raised at the U.N. this week exceeded expectations, uncertainty surrounds the outpouring of international sympathy. Aid workers want to know where exactly the money is going and when, as well as how the needs of cash-strapped local nongovernmental organizations (NGOs) will be addressed while Afghanistan's banking system remains crippled.

"The U.N. had a lot to say about food delivery, but I heard nothing about plans to reestablish a system of public services,” said Vicki Aken, Afghanistan director for the International Rescue Committee. "What about paying the salaries of teachers and doctors?”

Those salaries now run through financial plumbing controlled by former insurgents with a brutal reputation. In maintaining its grip on the Afghan state's foreign reserves, the U.S. hopes to pressure the Taliban to honor their promises to create a moderate and inclusive government.

Although Afghanistan's new rulers vowed as recently as Tuesday to ensure the U.N. aid is distributed fairly, reports have emerged in recent days of Taliban fighters cracking down on journalists and peaceful protests. "It's a gray zone,” said Daniel Runde at the Washington-based Center for Strategic and International Studies.

"We spent a ton of money building up state capacity. Do we now want a broken-down banking system so doctors can't administer vaccines? Do we care enough about women’s education to work with this regime?”

As the international community ponders the answer, doctors at a government-run pediatric hospital in Kabul say they have run out of antibiotics and gauze and are bracing for a harsh winter without heating as they treat a growing number of malnourished children.

"The economic conditions are getting worse, so the (cases) of malnutrition are increasing,” warned Noorulhaq Yousufzai, the doctor in charge of the clinic.